2 years ago
Soaring for a Sense of Accomplishment 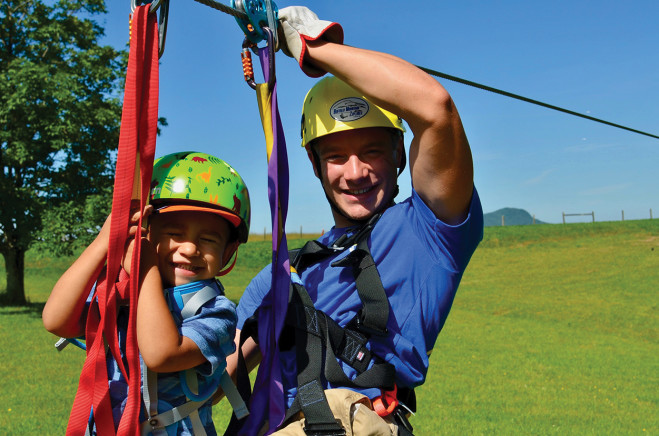 One day recently Robert Nickell sat in a rocking chair on the front porch of the business he and his wife, Joanna, run, Buffalo Mountain Ziplines. Located in Floyd near the Blue Ridge Parkway, the zipline course is the longest in Virginia, with one of its sections traversing 2,400 feet.
A group of zipliners was sailing through the canopy of the Blue Ridge forest, the pulleys of the devices which attach to their harnesses and move them down the galvanized steel cable through the woods making a pleasant whirring sound. “There’s not a better feeling than seeing a family and friends out there enjoying themselves,” Nickell observed. “People really connect with each other. The camaraderie is super, and they come out feeling happy.”
Buffalo Mountain Ziplines opened the last day of June in 2019, but the Nickells have a long experience with zipline operations. They built the first commercial canopy tour business in the U.S. 15 years ago in North Carolina. Robert Nickell is from Winston-Salem. He has constructed ziplines in Texas, Tennessee, Arkansas, Missouri, Kentucky, Indiana, Costa Rica, China and Canada, including courses which required a helicopter to put the cable in place. Cable is typically hauled by hand through the cleared course in the woods and lifted by a winch.
Prior to getting into the zipline business, Nickell was a contractor. He grew up in a family of engineers and understands the proper way to set up a zipline so enthusiasts can soar through the sky safely. One of his courses on a Caribbean Island which was buffeted by
Hurricane Irma in 2017 included the only built structures left standing after the hurricane passed over the island.
A zipline course typically consists of a number of stations which pass through a forest. Each station can be a freestanding structure built into the ground, but in Nickell’s courses, most of the stations are platforms constructed into the canopy of a tree. He likes building the platforms with hardwood species like white oak and maple.
The platforms are attached to the tree above the platform. Cables extend upward from each corner of the platform and connect to blocks built around the tree. This way the platforms can move as the tree grows upward. It’s also a gentler way to attach to a tree. Guy-wires (aka guy-lines or guys) are used on each platform to manage horizontal tension, leaving only downward tension on the tree.
Guests on the Buffalo Mountain zipline have spotted bear, turkey, bald eagles, hawks and deer. They’ve even heard the scream of a bobcat. These encounters happen at a safe remove, thanks to the harness worn by all participants. The harness wraps around a person’s thighs, chest, waist and shoulders, and connects to a device which rolls along the cable from spot to spot. The device is equipped with a hand brake, which a person can use to slow his or her travel as they near a landing destination. Each station also has an emergency brake.
Ziplining is a great activity for kids, from ages of three to teenagers, and adults who are young at heart and crave adventure in the great outdoors. Buffalo Mountain Ziplines has an abbreviated course for groups of younger participants and events like birthday parties and Scout outings. Most people who come, however, chose to enjoy the full course. The Sasquatch Tour, new this year, is a drive-around tour at dusk which visits the haunts of Bigfoot, complete with a guided hike, ghost stories, campfire and s’mores.
Even the company’s office has its attractions, including a stunning view of Buffalo Mountain to the south. “It’s a wholesome environment,” Nickel says. “People end with having overcome a fear of height or fear of motion, feeling more connected to nature and one another. They end with a satisfying sense of accomplishment.”
buffalomountainziplines.com

Tours [for now] limited to eight paying customers, 8 a.m. to 5 p.m. Thursday through Sunday. Two tour guides included, one at the front of a group, one at the back. Each participant wears a helmet and heavy gloves [both provided]. Helmets have always been sanitized between uses, and latex gloves are offered to wear under the heavy gloves. Note: No tours during high wind, heavy rain or lightning. Reservations recommended.