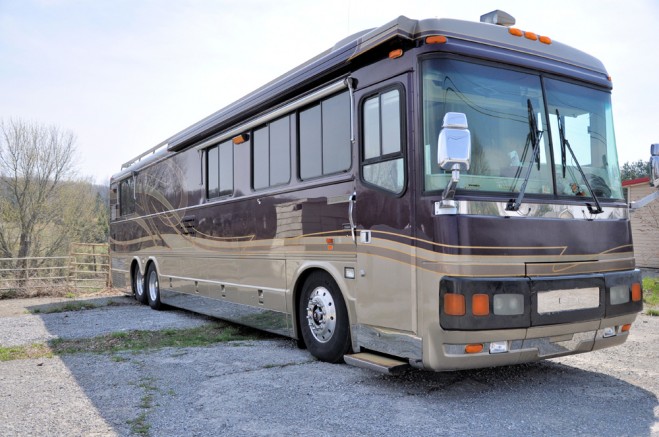 If you knew Bryan Katz bought his first RV – a pull-behind travel trailer – to take to Virginia Tech home football games in his post-graduate years, you might credit Hokie Pride for inspiring his passion for motorhomes.
But Katz has a bigger and better reason for his attraction to motorhomes, particularly Blue Birds. They helped bring him and his wife Katie together. “We went looking at Blue Birds together on our second date,” he explains. Katie’s parents had a Blue Bird motorhome, and Katz had “always, always loved Blue Birds.”
Today, the couple has a 43-foot 2003 Blue Bird Wanderlodge LXI with two slide-outs and a Detroit Series 60 diesel engine. They have taken the motorhome as far away as the Florida Keys and Kansas, but most of the 3,000 or so miles they put on the vehicle each year come from traveling to nearer destinations.
With two children under the age of four and busy professional lives – Katie is on the nursing faculty at Radford, while Bryan works on transportation research for Leidos and is an assistant professor of Civil Engineering at Virginia Tech – the Katzes don’t have much time for extended journeys. But they find the time to take their children on excursions, even if just for the weekend to a local campground.
“You’ve got to make the time for these things, to create family memories,” he says.
A motorhome is useful for traveling with young children, they say, for a number of reasons. You don’t have to worry about hotel reservations, for one. Since your vehicle is your living space, you also only have to pack your children’s gear once.
Underneath the Blue Bird’s living cabin is a set of storage bays. In one, Katz keeps camp chairs and tables. “A lot of living in RVs is done outside,” Katie shares. This Blue Bird has a large awning which extends from the passenger side. Sensors detect wind speeds and automatically retract the awning when it gets too gusty.
Other storage bays house tools and tailgating items, including a corn hole set. There are tanks for holding fresh water, waste water and fuel, as well as plenty of space for a series of large batteries and the engine and generator. All told, when fully kitted, the RV weighs 48,000 pounds.
David Reemsnyder has a similarly sized motorhome, a 2012 Newmar Dutch Star diesel pusher with four slide-outs. He bought it new to replace a 2006 model that was his first RV.
“It’s typical that after you’ve owned one, you figure out what you want in a motorhome,” states Reemsynder, who went to graduate school at Virginia Tech and has lived in Blacksburg for 42 years. So when he and his wife Judie bought their second motorhome, they knew exactly what they wanted.
Custom touches in their current RV include a wood flooring, solid wood cabinetry and upgraded seating. He took delivery of the RV at the factory, a process which included a week of training on the ins and outs of the vehicle. “I almost felt like I could be a mechanic when I was done.”
Since Reemsnyder retired last summer, he has taken his RV to numerous bluegrass festivals. He’s also gone on caravans with the Hokie Travelers, a community of motorhomers who like to travel with their RVs to Tech football games. Last year, in fact, Reemsnyder was the wagonmaster for a caravan of 13 motorcoaches that traveled along southwest Virginia’s Crooked Road.
“All things considered,” he declares, “I’d rather drive my motorhome than my car. It’s a comfortable way to travel.” The one thing he would do differently in regards to his RV, if he had the chance to do it over, is get started earlier. “I wish we had done more camping when our children were younger.”
That’s something the Katzes are fortunate enough to be able to do. While in their motorhome, the Katzes can not only share with their children their appreciation for Blue Birds. but also introduce them to Hokie Pride. One of the first changes Katz made to his Blue Bird was to add the Virginia Tech Fight Song to the list of tunes which can play from the musical horn on top of his RV.