3 years ago
Performance with Style and Comfort ~ The Sunbeam Tiger 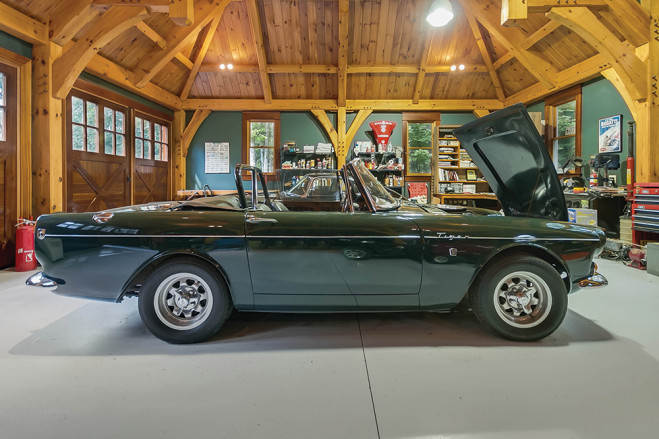 American muscle cars of the 1960s brought new levels of power and speed to the driving public and are still beloved by many. The classic British roadsters of that era were and are still loved for their stylish looks and touring heritage.
The Sunbeam Tiger – produced by the British Rootes Group from 1964 to 1967 – combined the torque of an American V-8 with the cool air of an LBC (little British car). American performance car legend Carroll Shelby built a prototype of the Tiger by modifying a Sunbeam Alpine, a two-seater coupe. Out came the Alpine’s 4-cylinder, 1.7 liter engine and in went a 260 Ford V8. The result was a jump in horsepower from 82 to 164, with only a 20% increase in weight.
“It was advanced for its time,” relates Floyd resident Chris Thompson, who has owned a 1966 Tiger for about 30 years. “It was one of the top sports cars you could have on the road.” Tigers were built in England: Ford engine, British chassis, unibody design. Their signature quality is the combination of performance with style and comfort.
Straight from the showroom floor, original buyers could hit the street and reach 60 mph in just 7.8 seconds, comfortable in a deep-cushioned low back bucket seat, adjustable steering wheel in hand, wood paneled instrument display in their gaze. Spectators would be wowed, watching the car’s 13-inch tires spin.
But many of the early Sunbeam Tiger owners were not content with factory levels of power and speed. They sought additional juice for the roadster by upgrading from a two-barrel to a four-barrel carburetor. Some would take out the 260 engine and drop in a 302. “When you do that,” Thompson explains, “the cars run hot and then you have to modify the cooling system.” The result is that most Tigers extant today have been hot-rodded – but not Thompson’s, and that’s how he likes it. “I wanted one that was extremely original.”
Thompson’s car, which he found in California, is original except some pieces like hose clamps. It even has an original, wooden steering wheel, a rarity for the car. A few years ago, Thompson took his Tiger to a concours of Tigers. Hundreds were categorized as modified, with only five – including Thompson’s – qualifying for the stock category.
Just over 7,100 Tigers were made over its short production history, which ended in 1967 when Chrysler bought out Rootes and did not have an engine which would fit under the bonnet of the car. Thompson’s car has a roll bar, a good safety feature when he would run the Tiger hard at Virginia International Raceway, the road course track near Martinsville.
The Tiger is not the only car Thompson has driven on a high-performance track. He started out racing a Dodge Stealth Twin Turbo about 20 years ago. His favorite track for the Stealth was the Charlotte Motor Speedway. “That car was a blast on that track.” From there, Thompson moved on to a 1969 Lotus, the four-speed, no-reverse classic Formula Ford racecar. The Lotus, famous for its grown-up-soapbox-car look, has incredible pickup. “It could go zero to 60 in 3.5 seconds,” Thompson recalls. The Lotus had only 100hp but since it only weighed 900 pounds (compared to the Tiger’s approximately 2,300 pounds), it could accelerate like the wind. The car’s engine also had to be rebuilt every 50 hours.
“That car was a blast. It was purpose-built for a track like VIR. It was my favorite car to try – double clutch, no synchros. And I only wrecked it once.” Thompson did become an instructor for the National Automobile Safety Association.
Thompson no longer has the Lotus, but in addition to the Sunbeam Tiger he does have a 1963 Jaguar XKE, which being able to motor at 150mph made it one of the fastest cars of all types when it was released. It has a long, thin, low-slung nose and simple, clean cabin design. The cabin is compact – so low that Thompson can’t fit in it with a helmet, rendering him unable to run the Jaguar on a track like VIR.
The Jaguar mainly stays parked while Thompson takes the Tiger out when he wants to ride around Floyd with his partner, Trish. Sometime he just takes the Tiger out on his own, too. “It sounds great, and it’s a lot of fun.”