3 years ago
Over the Hill and Making Hay 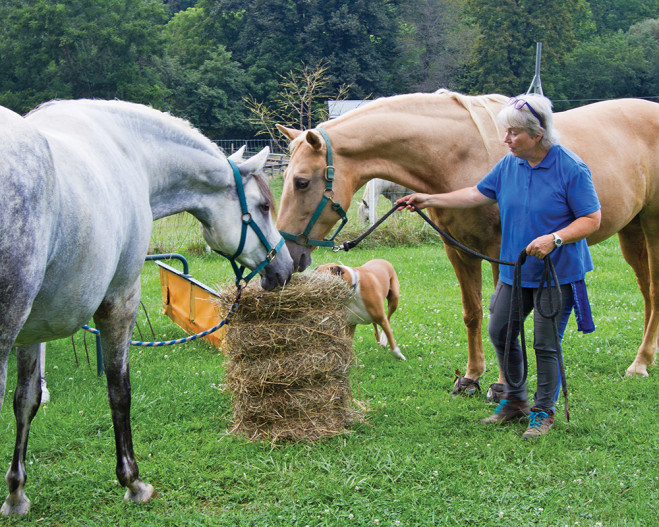 Horses are amazing creatures. They are not only imposing and powerful, but also quite fragile. They actually have delicate constitutions that make them sensitive to poor diet. Hay that contains mold or noxious weeds that do not bother a cow can be deadly to a horse. After years of buying hay, it became apparent that we had to do better. The last straw was a particularly bad load that contained briars, mature milkweed pods, large sticks, several flattened beer cans, a plastic milk jug and even a disposable baby diaper! That hay supplier commented: “A horse will eat anything if it gets hungry enough!” We decided right then to do whatever necessary to make our own hay on our own land.
This was a big decision for two senior citizens with none of the necessary equipment or experience. Making hay is a serious undertaking that requires a lot of equipment that is large, heavy and expensive. Our small fields complicate the problem in that they are hilly and oddly shaped, which makes for awkward and difficult handling of mowers, tedders, rakes and balers more at home on 80-acre fields than in the narrow confines of our two 4-acre pastures.
Likewise, tractors that handle large hay implements are themselves large, heavy and expensive and consume a lot of fuel. The bigger-is-better approach to agriculture in America is unsympathetic to the small farmer, so we decided to take an engineering approach to researching options for making hay. Alternative agriculture in other parts of the world uncovered small-scale farming methods that are more in line with our situation. 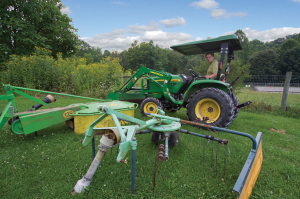 A key innovation for us turned out to be miniature round bales. They are popular in Europe and Asia where land is extremely expensive, and farms and equipment are much smaller than in the U.S. The Italians developed haymaking implements designed for walk-behind tractors, which was a revelation for us, but not something that an older couple cared to entertain.
More promising were the mini balers designed for familiar tractors with 3-point hitches and power take-off (PTO), just much smaller. Such balers are common in Japan with the IHI Star baling equipment being of particular note. This mini round baler is very small — only about four feet square and very compact. Best of all, the baler requires less than 25 HP to operate, which made it possible to use a smaller, more efficient tractor than would otherwise be possible.
The search for a U.S. importer of the mini round baler led to Small Farm Innovations [smallfarminnovations.com], an aptly named firm in Caldwell, Texas, that sells and distributes compact hay equipment for small acreage farms. After many emails and conversations with the owner of SFI, we purchased an MRB 850 mini round baler, a multi-purpose gyro rake and 55-inch drum mower, which are all very well-matched to a John Deere 38-HP 4X4 diesel tractor.
Learning to make our own hay has certainly been an adventure. With study and good mentoring from SFI, we learned the key processes of mowing, tedding, raking, moisture testing and baling. Making good hay in this climate requires about three days of work: three days to mow and rake to properly dry the hay and a few hours of baling. The quality of hay has been consistently excellent, and the compact hay equipment has proven to be reliable and efficient. A typical cutting of our two small fields produces approximately 300 bales and consumes about 18 gallons of diesel fuel in the process. A neighbor who had previously made hay on the property said that his much larger tractor would burn three or four times as much fuel for the same job.
Haymaking on our small acreage was a challenge that led to learning new skills, and we experience a lot of personal satisfaction in the process. We are very happy with the results, as Diane, who handles the mini round bales daily, confirms: “The effort to make good hay for our horses is a labor of love. It is a big job for a couple in our early 60s, and we work hard at keeping our horses and ourselves healthy. The pastures benefit as well. The quality of hay is terrific since we took over stewardship of our fields. The mini round bales weigh about 40 pounds and are around 20 inches in diameter and 28 inches long. They’re easy to handle and can often be rolled rather than carried to where they are needed. The horses are thriving on it, too!”

Donnie Coleman is an electrical engineer by profession and farmer by avocation. Diane Coleman is a former art teacher who loves the equestrian life on their farm.