6 years ago
One Street-legal Fun Machine 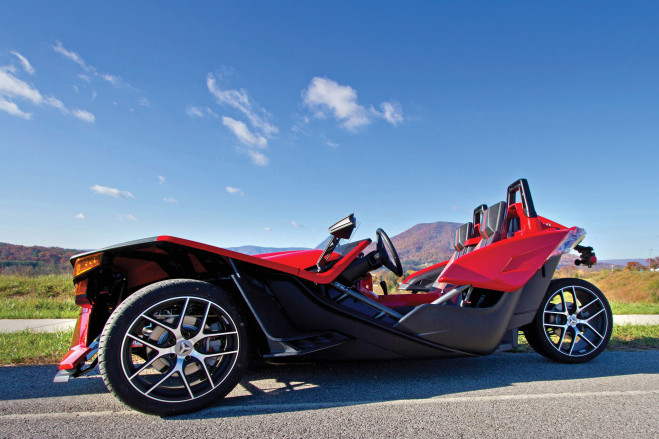 When you first see Gerry Clark’s 2016 Polaris Slingshot, it’s hard to know whether to call it a motorcycle or a car. It has no top and no doors and two side-by-side seats. It has two front wheels, controlled by rack-and-pinion steering, and one back wheel back, driven by a carbon-fiber-reinforced belt. It also has a steering wheel, waterproof seating and a waterproof interior.

For Clark, a long-time lover of motorcycles, what counts is that it’s a street legal, fun machine. “It’s got the power,” he says.

From the front, the 173 hp Slingshot looks like a modern roadster. Wide and low-slung, its uncovered wheels cry out to be track tested. The engine compartment is covered by panels made from lightweight, impact-resistant polymer. The hood, which is opened by pulling forward and upward, sports an angular design that speaks to the thrills that are sure to be found behind the wheel.

From the back, the Slingshot looks like a motorcycle the way a centaur looks like a horse. There’s the single wheel, the belt drive, but there’s also all that up front – including roll hoops – you don’t expect to see on a motorcycle.
Clark used to have a Can-Am 3-wheeled motorcycle, with two front wheels and one back wheel. But on the Can-Am, the passenger sits behind the driver, like on a traditional motorcycle. And steering requires two hands, while the Slingshot can be steered with one hand.

For now, the Slingshot is considered a motorcycle, so Clark wears a helmet while driving it. His wife can sit beside him; together, they can both enjoy listening to country music through the Slingshot’s six-speaker audio system.
The transmission is manual, with a floor clutch, five speeds and reverse. There is a low windshield and a display screen for a backup camera. There are also three-point seat belts. No climate control.

Clark lives in Pearisburg, having moved to Giles County after being born in Bland County. He worked almost 30 years at Celanese, rising from production to preparation and then insulator and maintenance mechanic. At other points in his life, Clark had a 750cc Honda motorcycle and a 600cc Honda Silver Wing scooter. None of them moved quite like the Slingshot, which weighs in at just under 1,800 pounds.

“I love it,” Clark states. “It’s fun to drive.” During a parade this year in Pearisburg, he took the sheriff for a ride in it. The Slingshot is sometimes referred to as an autocycle, because driver and rider sit inside the vehicle instead of straddling it. But to Clark, it provides an experience much like a motorcycle.

“It’s kind of quiet, not quite a Harley,” he relates. Still, you notice its sound when it’s on the road with you: a pleasing low purr, twinned with an attention-getting whine it makes during acceleration. “If you love motorcycles, you’ll like it. It’s relaxing, getting out in the air.” The biggest difference between his Slingshot and a motorcycle is that you don’t have to lean.

* Clark is no stranger to advanced technology and engineering. He uses solar panels at his home, and while at Celanese was involved in building and running the supply stations used at the plant.

* Since retiring from Celanese, Clark and his wife have been involved in a number of independent and home businesses. One of them is making laminated memorial obituary bookmarks.