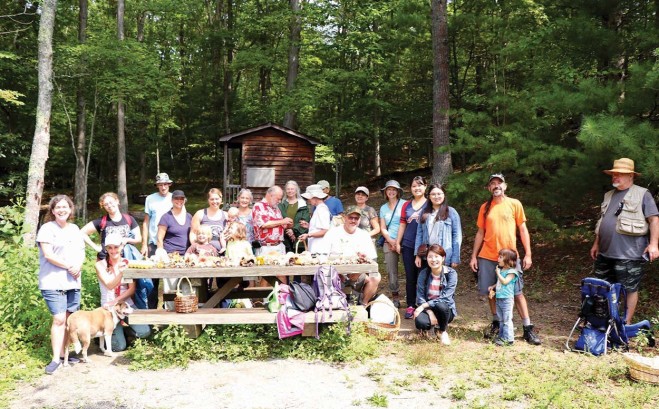 Even though she’s heard it before hundreds of times, Rebecca Rader, president of the New River Valley Mushroom Club, does NOT roll her eyes when a newbie tells her: “I want to join because I’m a fungi.” She takes it in stride because, “…(those jokes) just reflect that a new person has been turned on to the wonderful world of fungi, which is great! Every joke is a reflection of new-found enthusiasm for mushrooms and mycology,” she says.
There is a local group which meets monthly for people who want to learn more about mycology and how to identify mushrooms for cooking or medicine. NRV Mushroom Club meets monthly to hear speakers and plan forays into the woods to look for these specialists in the cycle of life in the natural world. Neither plant nor animal, mushrooms and fungi exist to break down dead plant and animal matter and return the nutrients to the soil to feed more plants that will feed more animals.
It all started with some people, many inspired by former Virginia Tech mycology professor Orson Miller, who would get together on walks to look for different fungi. In 2008, they organized enough to find a place to meet. [see sidebar for details] Forays into the woods are planned for April through September or October, and the club sponsors two a month – one during the week and one on the weekend. At least one knowledgeable club member is assigned to each walk, so the found mushrooms can be identified and catalogued. This lets members contribute to the larger body of knowledge about mycology, submitting the results to mushroomobserver.org, according to communications chair Ava Pope. Some of these finds can be quite amazing. “We stumbled upon this tree that had a bunch of dead flies hanging on the branches. Upon closer look, they were infected with this kind of fungus that had taken over their bodies and gotten them to land on this tree and die and spread their spores,” she relates.
In addition to planning forays, the meetings include speakers who help educate the group. Walt Sturgeon, author of Appalachian Mushrooms, spoke on what mushrooms are found here. Shannon Nix, a fungal ecologist at George Mason University, hosted a MycoJeopardy event at one of the meetings. She will also be giving an online talk entitled “The Great Escape – the science behind mushroom spore dispersal.”
While based in the New River Valley, the club draws members from all across the region and state, according to Pope. The club also travels, using the community kitchen, Plenty, in Floyd for their cooking workshops and using one member’s house who lives in Botetourt County for the mushroom cultivation workshop.
The club sponsors events such as the one night screening of “Fantastic Fungi” at the Lyric last December. The film was so popular, selling out the Lyric, that it boosted people interested in joining the club at the January meeting. The club also co-sponsored with the Mycological Association of Washington, D.C., the 2016 NAMA Shenandoah Foray. Rader explains its significance: “The annual event had never been held in Virginia, so it was wonderful to be a part of that.”
There are thousands of varieties of mushrooms and many yet to be discovered and studied, but only about 20 varieties in Virginia are suitable for eating. Both Pope and Rader strongly assert that no mushroom should be eaten unless you are absolutely positive what it is. This is why foraging with a club or a very good field guide is always necessary. Morels, those early spring beauties that taste like steak when sautéed in butter, are the favorites, but there are 19 other varieties with their own charms. Oyster mushrooms don’t taste like their namesake, but chicken-of-the-woods mushrooms indeed do, and both are delicious when properly cooked.
The annual cooking workshop is a favorite event for the club with several members volunteering to prepare a couple of dishes with their latest finds and the rest contributing to a potluck dinner. The mushroom cream sauce recipe [see sidebar] was featured at one of these workshops.
Rader considers the club a perfect metaphor of its subject. “The best thing about the club for me is seeing the spark of excitement spread and grow exponentially. It travels like hyphae, joining others to become mycelia, enveloping the roots of the community, pulling sustenance from the established trees and nourishing the seedlings, fruiting and attracting new minds and hearts. I love the feeling that we are building a platform from which brilliant minds of a new generation can spring. I absolutely believe that mushrooms can save the world.”