7 months ago
Not Your Grandpa’s Tailgate 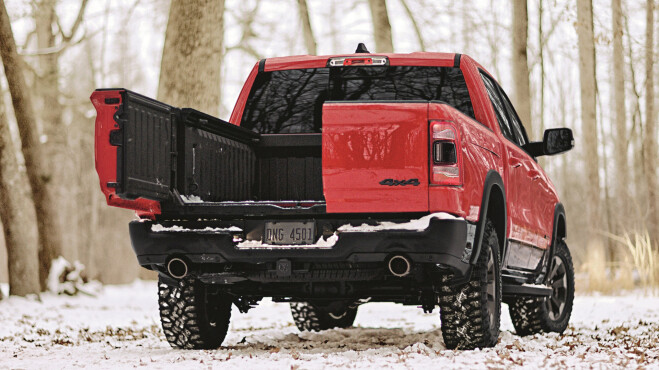 It’s a bird, it’s a plane. No. No. It’s a step, it’s a table, it’s a toolbox, a laptop storage spot, a boombox, a phone charger, a measuring tool, a workbench, a bottle opener. Aha.
It’s a tailgate! Definitely not your grandpa’s tailgate.

Someone brilliant took note of what a tailgate can be. Perhaps someone sketched it out on a paper napkin to submit to the bigwigs at the truck factories and voila! Multi-function tailgates.
Of course, since the advent of “tailgating”, the simple noun has evolved into a verb. There’s one theory afoot that credits the Green Bay Packers with coining the term tailgating in 1919. Fans parked pick-up trucks around the field and sat on the beds to watch the game. Since it was the last year before Prohibition (covered in more detail in the Speakeasies and Fine Dining article on page 18), one can safely assume fans enjoyed some spirits with their ham, potatoes and custards.
Tailgating aside, the wonderful tailgate, which heretofore has kept things from sliding out of the pick-up bed, and enabled access and removal when down or open, has morphed into a multi-use truck part.
The once dead space between tailgate panels is now shaped with little doors of its own for storage. Thin things like laptops and sandpaper fit neatly inside. The Ford F-250 has an integrated tailgate step with grab bar. Once the tailgate is down, you press a button and the step comes out and down. Then you can pull out a bar and position it vertically for a grab bar. In reverse, the grab bar comes down and when horizontal, pressing a button takes it inside and out of sight. Same with the step.
The Ram 1500 offers a split tailgate, akin to the 60/40 split backseat in an SUV. There are handy moments when one wants to swing open only half the tailgate, though it also pulls down like normal. Lights and outlets are available near the tailgate on many pick-up truck models. The GMC Sierra 1500 offers a sophisticated speaker system that operates independently of the truck, which need not be running to amplify your own little tailgate concert.
There are many reasons to buy one pick-up truck model or another, and now the tailgate could be a major decision factor. Innovation and creativity have definitely been applied to the once simple, dull, pull down, tailgate.