4 years ago
Natural Bridge Steps up to State Park Status 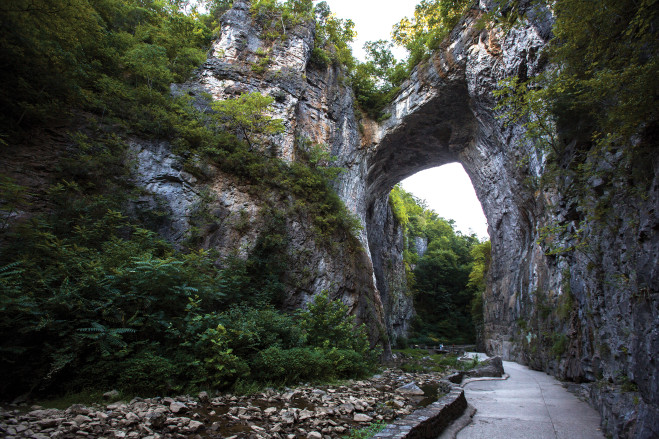 It’s hard to believe what now looms 215 feet above Cedar Creek and a well-traversed pedestrian walkway was likely the subterranean roof of a cave. Natural Bridge, once a sacred site of the Native American Monacan tribe, has been a beloved, familiar spectacle along the I-81 corridor since, well, long before the I-81 corridor existed.
Perhaps you’ve visited once or twice, speculated over whether or not the carved “G.W.” initials actually belong to George Washington and meandered the aisles of the spacious gift shop. Or maybe you’ve taken for granted that it’s been near all along, just over an hour north, and never really have taken the time to visit.
The bridge has been a major tourist attraction since the 18th century when Europeans came to explore the New World. In 1774, Thomas Jefferson purchased acreage that included the bridge from King George III for 20 shillings, thus setting in motion a snowball of ownership turnover for years to come. Natural Bridge was up for grabs again just five years ago.

In 2013, then owner Angelo Puglisi announced plans to put the bridge and surrounding attractions up for auction by year’s end. Fearing an unknown future and piecemeal acquisitions, residents of Virginia quickly organized to ensure protection of the attraction in perpetuity. A dream team of local and national land trusts, the Valley Conservation Council, Rockbridge Area Conservation Council and the newly formed Friends of Natural Bridge spearheaded efforts to assure the bridge’s fate was in good hands.
Puglisi ended up gifting the bridge and 188 acres of the property to the Virginia Conservation Legacy Fund (VCLF), a nonprofit organization. With a loan from the Virginia Clean Water Revolving Loan Fund, the VCLF agreed to pay for the remaining 1,300 acres. That means Virginia will not officially own the property until the debt is paid. But nonetheless, the Department of Conservation and Recreation (DRC) took over operations and began improvements immediately.

On Sept., 24, 2016, the towering limestone arch, with Lee Highway still buzzing over top, became the 37th addition to the Virginia State Park system. So how does a privately owned piece of land or natural wonder officially gain state park status?
“It’s usually through a donation of land or land that has been purchased from willing sellers,” offers Craig Seaver, director of Virginia State Parks. “It’s typically a property that has natural, cultural or historical significance that the park can attach to and complement.”
Once the Commonwealth has possession, an advisory committee is formed to steer the process. Committee members may include local business owners, chambers of commerce, private citizens, non-profit organizations, economic development professionals, local government, tourism folks and any other relevant stakeholders, therefore casting a wide net of representation. They ask questions like:

? What type of experience do we want
to offer?
? What areas should we develop and
what areas should be left alone?
? Will we threaten any species?
? Do we have the resources to sustain this
development?
? How can we bring the community back
to this space?

“A good baseline plan,” Seaver notes, “is to develop 15% of the property and leave the rest alone.”
The resulting comprehensive plan maps out an 18-month to 2-year transformation process. It is sent to the Board of Conservation and Recreation and the General Assembly for review. At this time, the public is invited to share ideas as well. Once there is final sign-off, funds are pursued to put the plan in action.

Place in the State Park System

At 1,540 acres, Natural Bridge State Park is average in size but sits 6th in revenue. Since coming under DCR rule, the park has seen a 40% increase in visitation. The most noticeable changes include branded state park signage, staff uniforms, new handrails and new picnic areas. The gift shop (the largest of all state parks) received all new merchandising with high-quality apparel, educational children’s toys and wares from local artisans.
Park manager Jim Jones says: “We’re still getting our legs under us. Since this was a place already in operation, we have a lot of existing components to incorporate. Now our job is to figure out how best to develop all the typical offerings of a state park.”
In the future, Jones adds, they would like to build limited overnight accommodations, whether cabins or primitive camping. There are also plans to increase day-use by providing more reasons to visit the park, likely via special programs and events.
Perhaps Natural Bridge, which has stood rock-solid amidst swirls of ownership and legalities, can take comfort in the fact that it’s now in the right hands. While changes surrounding the bridge can be frenzied and confusing, changes to the bridge itself happen so slowly they can barely be seen in a lifetime. Yet visitors will continue to come and go for lifetimes ahead. And the cherished bridge will continue to watch over each and every one of them.

? Walk down to the bridge and continue
along the Cedar Creek Trail to 30-foot
Lace Falls
? Visit the Monacan Indian Village for a
living history experience
? Duck down into Saltpeter Cave
? Attend a night sky party led by Roanoke-
area astronomers
? Take in a Saturday archery program and
be a modern-day Robin Hood

Nancy Moseley is a freelance writer in Blacksburg who has keen memories of picking out G.W.’s initials when she visited Natural Bridge as a child.