2 years ago
Nail Art: Meet the Monet of Manicures 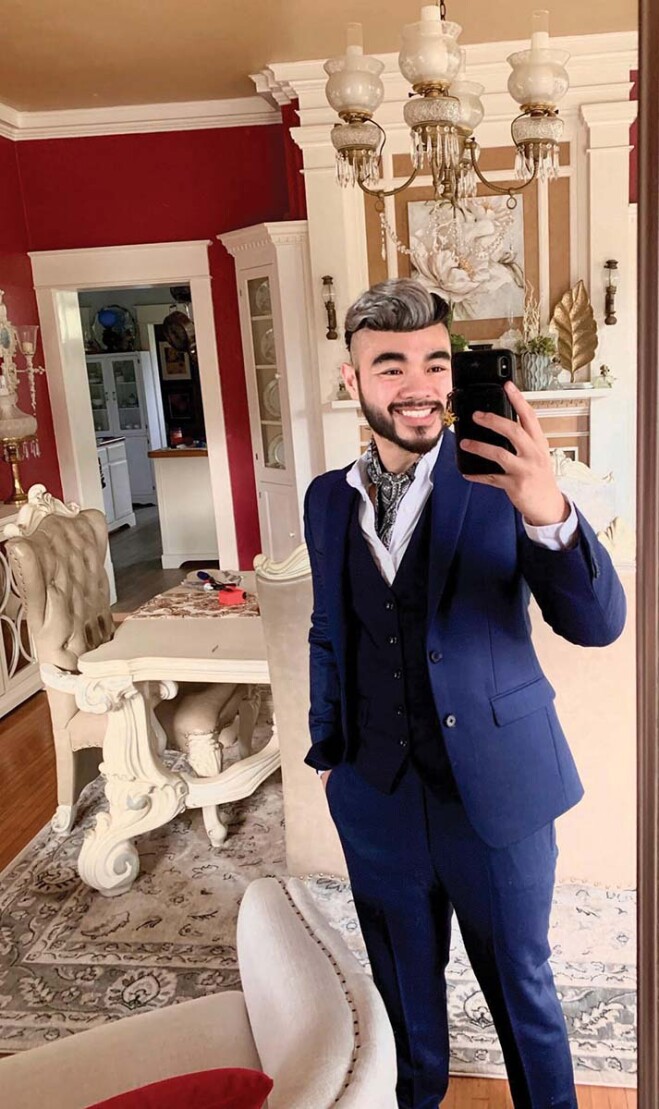 It doesn’t take a master’s degree in art to recognize the masterful work of Blake Le, the New River Valley’s resident nail guru. While his canvas may be small, his creativity is boundless. After seeing what can be done, you will never look at your fingernails the same way again.
Blake Le’s family traded coastlines when they moved to Virginia from Torrance, Calif., in 2001. They settled in Christiansburg, working at the New River Valley Mall nail salon. When Blake turned 18, he realized that by working alongside his parents, he would be able to put himself through college at Radford University.
“I eventually got my degree in graphic design, with a heavy emphasis on watercolor,” says Blake. “It was after I started learning more about painting that I decided to practice on a much smaller canvas, via the nail bed. When I realized that a canvas can be as small as a pinky nail, I saw how much fun it was, essentially doing a micro painting.”
Except that his micro-paintings aren’t stuck hanging on a wall, they are out and about, on some of the prettiest hands you’ll see. And of course, they’re also on the ‘gram.
“When I started my Instagram page (@blake_tle), that was when people began to take notice of my work,” he says. With 107K followers, it appears his reputation precedes him. From his humble beginnings at the Nail Trix Salon at the NRV Mall, he is now taking his own clients and managing his own appointments. His passion is contagious. “My favorite part about working is that I don’t feel like I’m working while I’m painting. It’s true what they say, work doesn’t feel like work when you’ve found the right job. My mind is at peace when I have a paintbrush in my hands.”

Though his mind may be at peace, his hands are busy turning his client’s vision into reality. Sometimes he looks at photos for inspiration, but many times a color combination is all he needs to get the idea flowing in his mind. “The funny thing is, I usually don’t even know what it’s going to look like until I start painting, because during the process I’m adding this and that to it.”
Blake’s current favorite nails to do are marble nails. “I love any type of marble, white marble, rose quartz, amethyst, etc., any type of stone, marble or gem — I love doing it.” Another current style trend involves making every single nail unique, which gives him tons of freedom. “My most common request in October is Halloween nails! It’s my favorite time to do nail art because I can do a variety of creatures, monsters, blood and more creepy stuff, ha. Not to mention black nails look good on any occasion.” He often gets seasonal requests, but he can create a look for any occasion.
“My most unusual request would be bugs! I once encapsulated a real scorpion (dried and not alive, of course) into a nail, kind of like how you might see a scorpion or cricket inside of a lollipop at a tourist gift shop.” As of now, Blake’s plans include improving his craft and expanding his client base. “Personally, I would love to have a stand-alone building for a nail studio. Currently, my partner and I just took over a new business in Pulaski, Poor Boys Produce and Plants, so I’m splitting my time between the salon and the produce market. Two polar-opposite businesses, but I love them both.”
Eating greens surely keeps the body healthy, and Blake has two important tips for keeping your nails healthy, too.
1.) Don’t pick or bite at them! Most people are incredibly surprised by how pretty their natural nails can be, just by keeping them neat, cleaned and filed. For acrylic/artificial nails, it’s the same. Wearing rubber gloves to wash dishes, scrub floors and do housework can prevent damage or chipping. It’s well worth the two seconds it takes to put them on and also protects against contact with harsh chemicals which can age the hands’ skin.
2.) Don’t use your nails as tools! Nowadays, there is a tool for everything, so don’t risk breaking a nail. Sculpted nails can last as long as you keep up with the maintenance, which is usually every 2-3 weeks, but once a month is even common. However, the longer your nails grow, the more weight is on the free edge of your nail, which can lead to breaking.
The best part about new nails is looking down and smiling every time you see your hands. It is like wearing expensive jewelry, without the expense. “Nails are an affordable luxury, and that’s the best part about getting them done,” says Blake. And with nail art as pretty as Blake’s, it’s no wonder this trend is on the rise.

Written by Emily K. Alberts, whose current salon artist is her 11-year-old daughter. She even let her cut and color her hair! What will quarantine boredom lead to next?