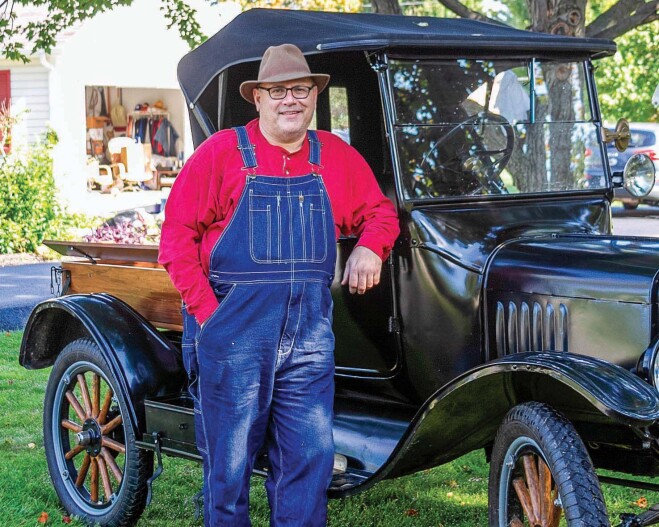 One recent autumn morning Jim Newman was washing his 1922 Model T Roadster pickup in front of his Radford home. “Looks pretty good for almost 100 years old, doesn’t it?” he asked. The car has been in Newman’s family for more than 50 years and was fully restored three years ago.
“You’re never finished, though,” says Newman, a professor at Radford University and chair of its Department of Recreation, Parks and Tourism. “I’ve got a battery drain issue to track down.”
Newman’s father Jimmy bought the car in the mid-1960s in Arkansas where Newman was raised and Jimmy spent his lifelong career as a barber. When Jimmy brought the car home, he took it apart, sandblasted it, and completely disassembled it down to the frame. From there, he worked on it intermittently over the years.
“When I was a kid, the wheels were on the walls of our shop,” Newman recalls. “The attic was full of body panels.” The Model T Jimmy bought was a Touring model with four seats – two in the front and two in the rear. Partway through the restoration, Jimmy decided to convert it to a 2-seater Roadster. Some Roadsters have a trunk in the rear, but this one is now a pickup with a wooden bed. “Back when these cars were new, people would put homemade beds on them to make them pickup trucks; some folks made beds out of shipping crates.”
Newman’s father did most of the restoration work himself. To convert it to a Roadster, he built the rear upright behind the front seat; to accommodate the pickup bed, he put in supports. The one thing Jimmy did not do was the engine restoration. The engine is a rebuilt 1926. “It probably doesn’t have 100 miles on it,” Newman reflects.
Because cars back then didn’t have Vehicle Identification Numbers or VINs, they are identified by their engine block number. Thus, the car is titled as a 1926, even though aside from the engine, it’s a 1922.
The car has original wood spoke artillery wheels, which means the spokes can be individually removed and replaced. Under the seat is the 10-gallon gas tank. Along the running board of the passenger side is a toolbox for repairs which might be needed while out with the Model T. When you get a flat tire, the whole rim comes off. If you get stuck, there’s a shovel strapped to the side.
“A Model T wasn’t just a car,” explains the owner. “It was the first off-road utility vehicle, designed to go just about anywhere. Back then the only paved roads were in towns. The vehicle is designed with high clearance, and the leaf springs run transverse across the car. Both of those parts of the design help it maneuver over rutted roads or across fields.” When Model Ts were new, people used them to power other implements. You could take off a wheel, attach a pulley and belt, and run a sawmill or grain thresher. Some people even turned them into tractors.
The width of the wheels was measured to match railroad tracks, so the cars could be fitted with steel wheels to work the rails. Some Model Ts were even made with the wheels closer together, to fit on narrow gauge railroad tracks. Some users – including the U.S. Postal Service – used converted Model Ts as snowmobiles, with skis in the front in place of wheels, a second axle in the rear, and tracks wound around the two rear sets of wheels.
While most of the work on this Model T is complete, there is still plenty of upkeep. Newman greases zerks on the axles and fills oil reservoirs with an oil-fashioned oil tin. Over his life, he has owned and worked on a number of old vehicles, including a 1965 International Scout, a 1968 Chevy pickup, and a 1973 VW Squareback.
“This is the oldest one, though. It is a challenge to work with because even though it’s simple, it’s different than any other car.” The primary braking system, for example, is run through the transmission. The throttle is on the steering column, not the floor. What’s more, there’s also manual control of the spark advance. “You have to adjust when the cylinder fires.”
When you’re going full-speed, with the throttle all the way open and the spark advance at maximum, the two controls on the column are pulled back toward the driver. “They say a Model T is like a mule. When it’s going all out, both controls on the column – like the ears of a mule – are all the way back.”
“Operating a Model T properly,” Newman continues, “takes a lot of hand-eye coordination.” Because the operating controls are so much different than your typical modern-day car, “you have to unlearn how to drive to be able to learn how to drive a Model T. But it’s fun. When I take this out, I’m always waving to people.”
In addition to teaching at Radford, Newman is a Major in the Virginia Defense Force. In 10 years he has participated in 16 emergency activations, most recently 2020’s COVID pandemic.
Someday, Newman may like to a get a Model T Speedster, a sport version of this classic car. When operating and maintaining a Model T, getting used to its old-fashioned engineering can be a challenge akin to thinking in a foreign language. But that’s a challenge Newman is up to. “I always like having something to learn.”