2 years ago
Mike and Cathy’s Adventure 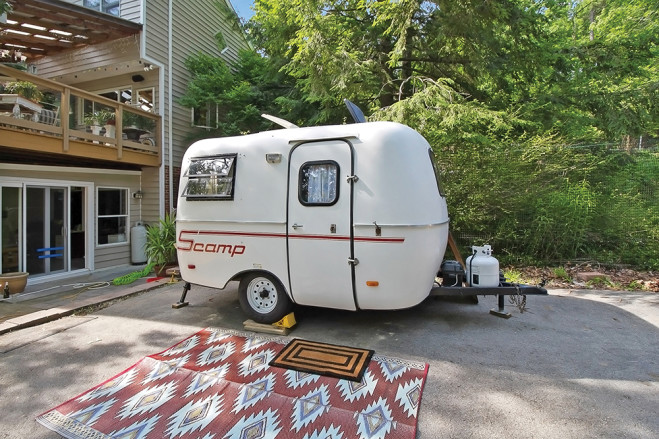 “We like to travel and cover ground and get in and out of campgrounds quickly,” says Mike Skinner, explaining why he and his wife Cathy bought a lightweight Scamp camper last year. “In the morning, I can hook it up, and we can be on the road in 15 minutes.”
“In the evening,” Cathy adds, “it doesn’t take long to be parked, with the lights on, having wine and cheese.” If you’re looking for a simple camper, Mike says this is it.
The Skinners’ 2006 Scamp has a soft, rounded box shape. White with a fiberglass exterior, the Scamp has a red accent stripe right below its beltline, where the top and bottom halves of the trailer are connected and sealed with piece of metal trim called a belly band.
A propane tank and battery sit outside the trailer on its front-side trailer rig. Like all Scamps, it was made in Minnesota. The camper measures just 13 feet long, which is about 3 feet shorter than the 2015 Honda Pilot the Skinners use to haul their Scamp.
Despite its size, the Scamp has a lot of features inside, as well as a cozy feel. “We were surprised by really how much room there is inside,” Cathy states. The Skinners’ Scamp can sleep three – two on the main bed in the rear and one on the forward bench. There is a version of the 13-foot Scamp with a bunk bed up front, permitting four people to sleep inside. Another version has an enclosed toilet in the front.
The Scamp’s kitchen area is compact, with a single-well sink, two-burner propane stove and refrigerator. Water for the sink comes from either an external hookup or an onboard 8-gallon water tank. The rear area is convertible between sleeping and dining, with the dining arrangement including a table between two benches. There is also a closet, as well as storage in the rear bulkhead and under the rear benches.
There is no air-conditioning but it does have a ceiling fan. A portal in the ceiling is the fire escape required by code. The Scamp has a power hookup to run the fan, refrigerator, lights and a single electrical receptacle. When an electric hookup is not available, the appliances can be run off the on-board battery.
The camper has a screen door and most of all for Cathy: “It has a lot of basic charm.” When the Skinners pull up to a campsite, they extend their available living space by setting up a canopy, putting down vinyl rugs and including the site’s picnic table.
They also cook outside on a portable two-burner propane stove. The only thing they use the Scamp’s onboard burners for is making coffee. Cathy enjoys French press. For this couple, the camper’s small size is an advantage. “I had done a lot of research,” Cathy recalls, “and I knew a 13-foot camper would be Mike’s dream.”
“Our concept is we want to be able to pick up and go,” Mike continues. “In fact, before we bought the camper, I wanted to make sure I could move it around by hand. [He can.] It comes in handy when you need to maneuver the trailer in a campground.”
Mike and Cathy have known each other since elementary school in Charlottesville. They are both graduates of Virginia Tech, with Mike attending for both undergraduate and graduate programs and Cathy for her graduate degree. Mike works across southwest Virginia and beyond as an independent forestry consultant, and Cathy is an instructor in Tech’s English department. She plans on retiring after the fall semester.
Both of them have camping in their blood. Mike went tent camping with his parents as a child, and Cathy watched her parents experiment with a variety of RVs after their children left home. “On one trip they departed in a Winnebago and came back with a Pace Arrow. Apparently trading for a new RV while on the road is very normal among RV owners.”
The Skinners first used their Scamp in March, taking it to Texas to visit a son (the couple has three grown children). They did most of the outfitting for the camper in Texas, after they were on the road and had used it. “That way we avoided the mistake of getting things we thought we would need but really didn’t,” Mike adds.
While on the road, the Skinners can make decisions on the fly about where to travel and stay, permitting them to go places that could not accommodate a larger RV. “We can go to a small town, on small roads. It’s easy to maneuver and park in small spaces.” On their way back from Texas, for example, the Skinners stopped in Oxford, Miss., to see Faulkner’s home. They parked downtown, taking up two spaces and feeding two meters.
Since the Texas trip, the Skinners have used their Scamp on other occasions, with more planned for later this year. “It’s exactly what I was looking for,” Mike says. “With its simplicity, being compact and lightweight, it’s like backpacking without the walking.” And Cathy adds having found “when we’re out together in the Scamp, we become a little more balanced in our relationship. You’re out with your best friend, and it’s our adventure. Mike and Cathy’s adventure.”