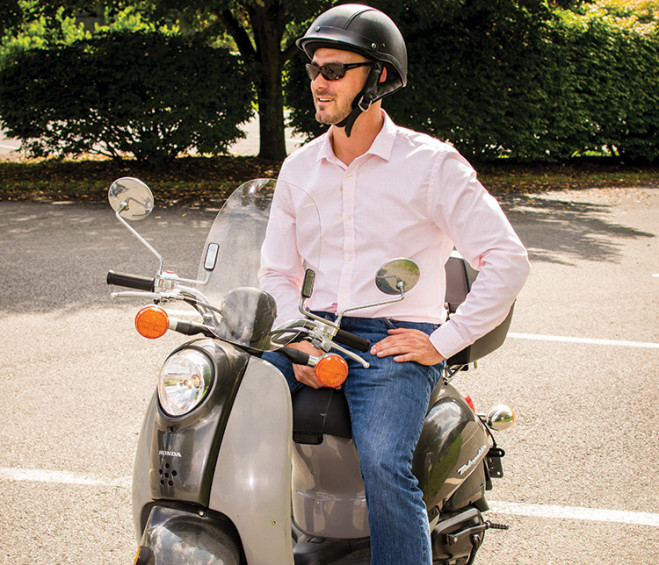 “You can’t take yourself too seriously riding a meep meep,” says Jeremy Hart, owner of a 2009 Honda Metropolitan scooter and associate broker at Nest Realty. He drives his scooter regularly, which says something about both his lighthearted nature and his practicality.

Scooters are “perfect for Blacksburg,” he contends. When you’re just driving across town – say “for a quick pop out somewhere to see somebody” – and you won’t be driving over 35 mph anyway, why not drive something so convenient and fuel-efficient?

Jeff Noble, lead pastor at Northstar Church, concurs. He regularly drives his 2007 Honda Elite 80 around town and appreciates its functionality and economy. “I’ve spent three dollars on gas the past two months,” he says. “It’s wonderful for parking on game days.”
Hondas have a reputation for reliability, and both Hart and Noble attest to the reliability of their scooters. Both models have durable single-cylinder, twin-valve, four-stroke engines. Hart’s is 49cc and liquid-cooled, while Noble’s is 80cc and air-cooled.

The Metropolitan’s cooling system has a radiator next to the engine. A fan on the flywheel blows on the radiator, boosting the efficiency of the cooling system. Another innovation in the scooter’s mechanical design is a dual-use alternator and starter motor. The electric start works by running power backward through the alternator, thus eliminating the need for a separate starter motor (and keeping the vehicle’s weight at just 176 pounds). The Metropolitan can also be kick-started. Both the Elite 80 and the Metropolitan have drum brakes.

Honda manufactured the Elite 80 from 1985 to 2007 – a remarkable 23 model years – with few changes. The design – including the flat lines on the body panels – is reminiscent of the 1980s. The Metropolitan, in contrast, has curved plastic body panels.

Noble likes his scooter – it’s the second Elite for him. He didn’t have to get a second one because the first one failed – it was stolen when he lived in Arkansas. The Elite has a hinged storage space on the face of the vehicle, enough room for Noble to stow papers and a drink or two. When he uses the scooter to go shopping, he’ll store the bags on the floor by his feet. The Metropolitan has a hook underneath the dash for holding bags. Hart takes advantage of this feature all the time, such as when picking up his fruit share.
Noble’s Elite has a large comfortable seat with enough space for a passenger and sizeable, fold-down, passenger foot pegs.

In Virginia, drivers and passengers of scooters must wear helmets. If the scooter does not have a windshield, the driver has to wear a helmet with a face shield. Drivers must be at least 16 years old and carry a government-issued photo ID.

You must have a license plate on a scooter, but you don’t have to have it inspected or insured unless it is driven faster than 35 mph. In that case, the scooter is considered a motorcycle and must meet the stricter regulations that apply to motorcycles. There is no personal property tax on scooters.

According to Hart, learning to ride a scooter involves adjusting to staying balanced and watching out for cars. “You need to be responsible,” he adds.

The scooters don’t require much maintenance. Noble changes the oil on his about every six months, and Hart winterizes his – draining the oil and fuel – when he’s done with it for the year. If you were truly determined, Noble figures, you could, with gloves and enough layers of clothes, ride a scooter throughout the winter (avoiding periods of snow and ice).

In the winter, though, Hart and Noble drive their other vehicles – Hart a Subaru Forester and Noble a GMC Terrain. Come spring, though, they’re eager to get back on their scooters again. Being able to ride in the open air allows you to take in “the sights and smells and sounds of Blacksburg,” states Hart.

“I love the smell of Carol Lee Donuts while riding down Main Street in the morning,” Noble says with a smile. “It’s just fun,” adds Hart, along with this piece of advice for those considering owning a scooter: “Don’t knock it ’til you try it, but if you try it, keep your mouth closed.”