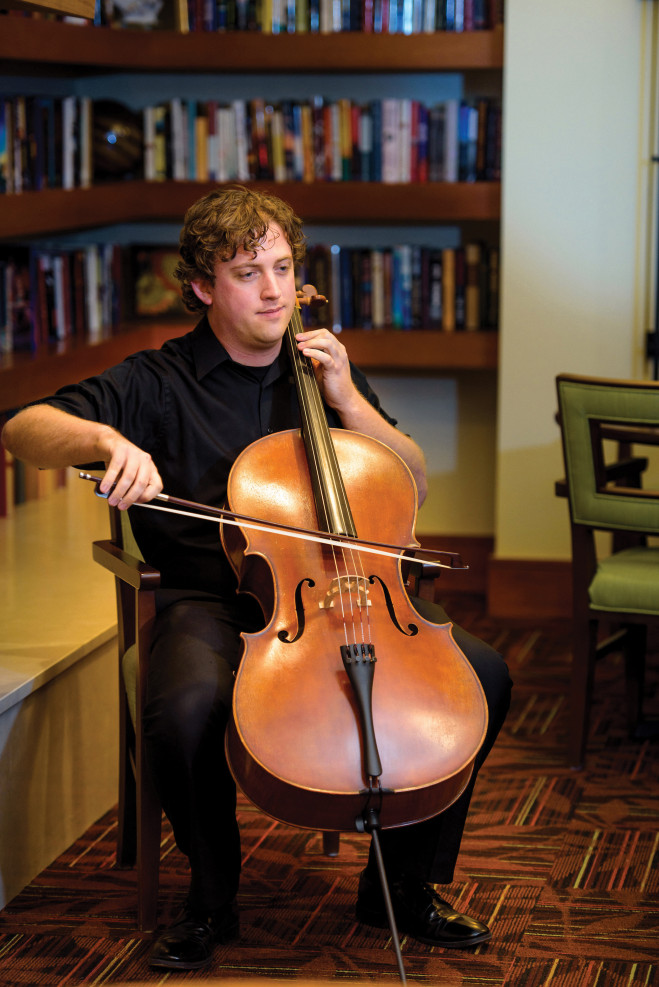 John Crawford started playing music as soon as he was old enough to plunk on piano keys. Of course, a lot of toddlers plunk frenetically on piano keys, but few grow up past toy keyboards or even grade school band to become talented adult musicians, scholars of composition, active in community and professional orchestras and mentors to like-minded youth.
“My grandmother noticed my early interest in the piano and immediately took it upon herself to give me lessons.” John Crawford ended up continuing with the piano throughout elementary school, his dedication atypical of childhood capriciousness. In middle school he chose to play the trombone because “when the band teacher presented the different instruments for selection, it was the only one on which I could produce a sound.”
Crawford, 32, grew up in Yorktown and went on to be a December 2009 graduate of Virginia Tech with a degree in Computer Science. During his college years, he continued with the trombone as a member of the VT Jazz Band plus two seasons with the Marching Virginians. He cites a desire to continue learning with the same intensity that college requires as the motivation to pick up a new instrument post graduation.
“I really wanted to get into classical and group performance,” he explains, “but I wasn’t good enough at the piano, and I think most classical trombone parts are kind of boring. I thought and prayed about it a lot and started to hear cello parts on the radio.”
He readily admits that making the jump to a string instrument was not easy. Upon recommendation from a friend, he contacted Daniel Foster of Foster Violins who set him up with a rental cello and a list of local teachers. Åke-Eric Renqvist, conductor of the Blacksburg Community Strings and former violist with the Helsinki Philharmonic Orchestra, was the first teacher to pick up his calls.
Crawford started formal cello lessons with Renqvist in April of 2010, practicing two to three hours every day at Squires Student Center. He excelled quickly, and by the holiday season of that same year, Renqvist invited him to play with the Blacksburg Community Strings (BCS). Over the years, in addition to his BCS membership, Crawford has procured several professional opportunities. He has performed with Mill Mountain Theatre, Showtimers Community Theatre and the occasional special church event or wedding. He has played for Chinese New Year and Lunar festivals, New River Stage performances and, rather simply, to entertain folks in retirement communities. He is also a staple on the worship team at Northstar Church in Blacksburg.
Crawford is a research computer programmer at the Virginia Tech Carilion Research Institute in Roanoke by day and continues to moonlight, so to speak, as a cellist. When asked if there is any connection to his profession as a computer scientist and his passion for music, he nonchalantly offers that he is currently writing a custom plug-in that will remotely control his synthesizer for better use while composing.
Crawford started composing in elementary school (a “Jazz Train” number) and continued to dabble in arrangement and composition throughout high school and college, amassing more than 31 original pieces of work to date. The motivation to compose and not just play, he notes, is born out of a desire to hear music that doesn’t exist.
“Sometime in my elementary school years, my dad bought a Casio keyboard which I actually still have. I remember using the MIDI track recording features to make covers of different songs.” Now Crawford’s first orchestral piece, entitled “Dance of the Magus,” is slated for performance in 2018.
Crawford composes and records in his home studio in Christiansburg and has plans to release an album in 2018. “It starts with a lick or a chord progression and soon you have a song. The album has definitely been my driving force to continue learning.” He is currently learning to perfect playing the electric guitar, electric base and drums and has even studied the harp. To round out his already impressive repertoire of instruments, he recently started voice lessons with Ella Kromin, whom he found through Bridge Kaldro Music in Christiansburg.
“Music is my voice. It’s my way of expression, of exploring different facets of myself.” Crawford has always admired music with varying styles and artists that don’t stick to one particular sound. His taste runs the gamut. He found early inspiration in Yoko Kanno, a Japanese composer best known for her work on the soundtracks of anime films, and his favorite classical piece is “The Planets” by English composer Gustav Holst, where each movement is named after a planet in the solar system. He also likes old movie musicals, classic rock and popular music from the late ’90s and early 2000s.
A humble, steadfast devotion to learning has influenced John Crawford’s musical career since he first toyed with piano keys. His preference for music that widely varies mirrors the human condition, ever-changing and evolving with life experience. When prompted for what’s next, he openly admits to looking ahead in only one-year increments. “There is so much material and technique with string instruments to give you a path forward. I will continue to take lessons for the foreseeable future. Even all the practicing is beautiful.”

Nancy Moseley is a Blacksburg-based freelance writer. She played the flute throughout middle school and retired her musical career after 8th grade.