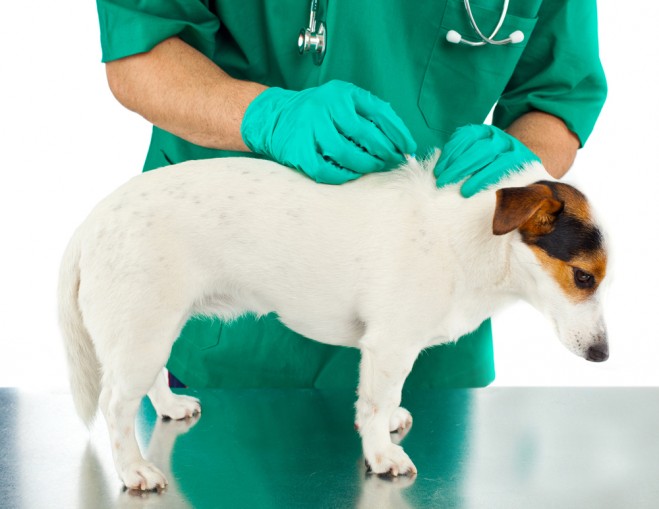 “I’d like to check you for ticks,” is not just a memorable line from a catchy Brad Paisley tune. It also contains great advice for preventing Lyme disease, the bacterial infection transmitted by tick bites which is becoming increasingly prevalent in our region.
“Prevention is key,” says Dr. Molly O’Dell, director of the New River Valley Health District. “Vigilant tick checks can help you from becoming infected.” Last year, according to O’Dell, there were 153 cases of Lyme disease in the NRV, making it the second most common non-STD communicable disease around here. Cases are on the rise, with the frequency of incidents more than tripling in four years, from 39 cases in 2009.
One of those infected that year was Mauricia Shanks, owner of M & J Pet Grooming in Pearisburg. One day, after caring for a dog carrying ticks, she found a tick behind her knee. It was several weeks before she exhibited symptoms of the illness. “It started out like I had the flu,” she relates. “I had a fever, my muscles and joints were aching, I was fatigued. I felt miserable.” She went to the ER, but wasn’t diagnosed or treated for Lyme disease.
In many cases the illness is recognized by a distinctive bulls-eye (or spot within a circle) rash that develops at the site of the tick bite. No such rash developed in Shanks’s case.
A few weeks after her trip to the ER, though, she developed a bruise where she had been bitten. “It looked like I had been kicked,” she recalls. This time when she sought medical treatment she was prescribed antibiotics. Within two days she was feeling better. Her story doesn’t end there, though, because the disease returned later that year.
“It hit me like a freight train. The second time was far worse than the first. My brain was foggy, and my fingers rolled up tight.” The overall effect was incapacitating. Shanks credits her family for looking after her home life and her business during that period, and credits a second, longer course of antibiotics for allowing her to get well.
She believes, though, that if she had been treated with antibiotics earlier ~ when she first exhibited symptoms of the illness ~ she might not have had a recurrence.
Her case illustrates a puzzling aspect of Lyme disease. In most cases, a course of oral antibiotics will allow an infected person to recover completely. Yet sometimes, when diagnosis and treatment are delayed beyond the initial phases of the disease, it can develop into a recurrent or even persistent and pernicious affliction, sometimes called chronic Lyme disease.
Kathy Davieds of Floyd suffers from this syndrome, which causes her joint pain so extreme it wakes her during sleep. She came down with symptoms of the disease in 2006. She sought medical treatment but it took months, however, for her to be diagnosed and treated. Her case required intraveneous antibiotics. Though she is improved, she isn’t fully recovered. “I’m a shell of my former self,” she says. “I feel like I aged 20 to 25 years in one year.
What we do know about Lyme disease is that it is transmitted by the black-legged tick, or deer tick. Transmission often occurs when a tick is in its nymph stage, about the size of a poppy seed and hard to detect. Nymph-stage deer ticks are active from May to July, so this is a critical time to take steps to avoid being bitten. “I’ve been hiking these mountains my whole life,” says Dr. O’Dell, “and today I see a lot more deer ticks than when I was a kid.” When going outside, wear clothing that covers the arms and legs. Dr. O’Dell wears ankle gaiters to cover the gap between her footwear and the bottom of her pants when she goes hiking.
The Centers for Disease Control recommend using an insect repellent with DEET or permethrin when you go outside. Some DEET formulations are safe for on-skin application. Permethrin should be applied only to clothing. Always read and follow the repellent’s instructions before use.
When you come in from time spent outdoors, bathe or shower as soon as possible. Use a mirror to check your entire body. If you have children, check them for ticks – including their hair, belly button, and behind their ears and knees. Also check your pets for ticks.
The section of the CDC website on Lyme disease has much more information about the  disease, including recommendations on how to remove a tick attached to your skin. Stay updated, too, because understanding of the infection and the way it affects humans is evolving. “We’re still learning about Lyme disease,” Dr. O’Dell states.