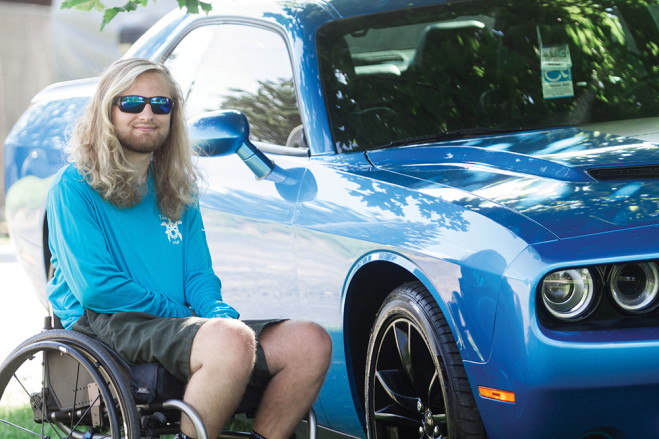 Coming home from school on Oct. 21, 2016, Logan Smith lost control of his red Ford F250 hydroplaning on a slick road in Dublin and plunging 35 feet down. The truck rolled over and landed on rocks which compressed the roof, rendering him motionless and trapped in the unseen cab for nearly an hour. A town worker passing by noticed a damaged tree and stopped, finding Logan pinned in a very small space, drifting in and out of consciousness.
Initially, the Pulaski County High School graduate had no feeling below his neck. Doctors in Virginia broke the news in his hospital room that because he suffered a “C6/C7 complete”, in medical lingo, he was now a quadriplegic who would never do anything below the injury. The bed and/or a special wheelchair would be his new home, his new life.
His mother, Robin Dian Smith, respectfully listened. She then escorted the doctors and medical staff from Logan’s room, closed the door, and told Logan he would do everything he used to do, just differently. That day, in that room, Robin, his father Bobby Smith, and older brother Corey Smith, made this list:

Logan has checked off everything on that list, plus:

Not satisfied with the dismal prognosis in our region, Logan transferred to the Shepherd Center in Atlanta. Because he was 18, he just barely qualified to enter the Adolescent Spinal Cord Injury program. “Logan struggled with things we do every day,” his mom relates, “like feeding and dressing himself. We cannot imagine waking up and not being able to move, yet this was Logan’s initial predicament.”
At first, Logan could not move his hands and had feeling in just three fingers. With special devices and a commitment to improvement, the now 22-year-old young man continued strengthening exercises. “The healing is so slow that many people give up,” says Robin. Surrounded by his family’s constant support and encouragement and an unwavering faith in God, Logan lunged into moving any body part which would respond. Soon, every night after the staff went home, Logan would work out in the Shepherd Center gym.
Logan came home to Dublin about six months later and continued to build on finger usage, hand dexterity, arm strength, muscle development and skills of daily living. The whole community, along with Dublin Church of God, rallied around him with notes, fundraisers, prayers, financial gifts, offers of help, more than 3,000 cards. He has regained muscle strength and muscle thickness he had been told would never happen.
Now, nearly four years later, Logan strives to build on his achievements every day. Having wanted to be a Navy Seal, the handsome, blond, bearded young man’s crowning achievement to date might well be having gotten re-certified as a diver. He drives a bright blue Dodge Challenger, takes it to car shows, and until the pandemic arrived, he drove himself to classes at Virginia Tech.

The medical bills are staggering, think $3 million and up. His bike cost $10,000. The wheel chair to go up Stone Mountain carries an $8,000 price tag. He goes to N.C. twice a week for rehab, research and competitions in rugby and cycling. Local businesses still offer fundraisers to help meet expenses. Strangers send money. People pray.
Robin left a high-paying job of her own to become Logan’s caregiver, trusting God with the financial details. “We were in the right place at the right time for his opportunity for a fully-paid trip to Aspen to go skiing,” she recalls. “God opened that door for him, we didn’t. He got re-certified for diving at a quarry in Alabama we never knew existed, and somehow, the funding to do it was there. God’s hand is all over our family and this experience.”

When Robin opened a Facebook page named “Prayers for Logan”, she never imagined the connections, prayers and financial contributions which would flow in from around the world. “Most people who connect in incidents like this one stick around maybe a year, but people are still in touch, still caring and still wanting updates on Logan’s progress.”
“We don’t believe man,” Logan says with conviction, referring to the first doctor’s totally dismal outlook. “We know what God can do. I am seeing God’s power in my daily life, doing sit-ups, for example.” He was told he’d never do a sit-up. You can log on to Facebook and watch a slice of his 100 – that is o.n.e. h.u.n.d.r.e.d. – sit-ups. In a row. One after another.

“I believe I will walk again. I do not know if it will be a miracle like in an instant or maybe as a result of research studies I am involved in or just my own hard work, but it’s going to happen,” Logan states with confidence. He spends energy and time in the hallways and rooms at Shepherd Center, talking to others, encouraging recent accident patients not to give up. “It is a choice every day to get up, get out and make a difference.”
When asked about having a service dog, Logan shakes his head negative. “I want to do things for myself,” he explains. To that end, he is working toward moving out of his parents’ house, living in an apartment on his own, continuing his double major in business and real estate at Virginia Tech. He hopes to make the USA Olympic Rugby Team.
Logan Smith is laser-focused on his goals, while caring about others, reaching out to and raising money for people facing similar challenges. This is one young man who is already standing tall as a testament to what courage, faith and community can accomplish.

In 30 seconds, my dreams of attending the University of Virginia, where I had been accepted, joining the U.S. Navy as an officer and becoming a Navy Seal were dashed forever. God had other plans for me and my life.

Where I see a mountain to climb from my vantage point on the ground, it’s nothing but a little hill to God looking down. We cannot make mountains out of mole hills. And we can conquer mole hills with determination and a reliance on His power and His strength in us.  – Logan Smith, 22

To send a card, contribution or encouraging note or consider hiring Logan as an event speaker on courage, faith and community, write: