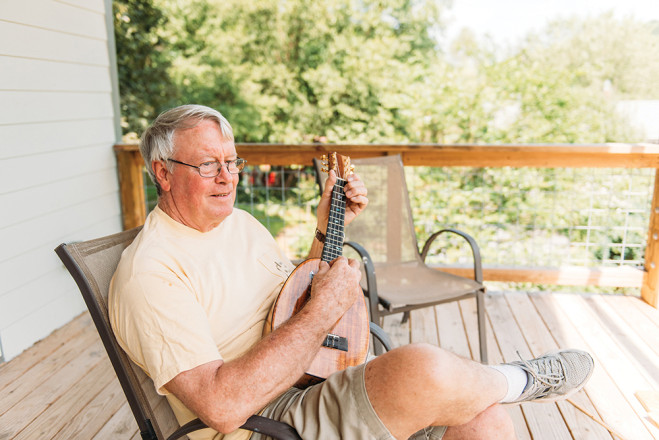 Windy Hill GuitarWorks began in 1992 after Mike Mears took a trip on a whim to the Martin Guitar factory in Nazareth, Penn. It dawned on him there that guitar making was not as difficult as he thought, and it was being done by all sorts of people – not only very old men with long beards, but also young factory workers wearing Harley jackets and earrings.
“I asked if they sold any parts that I could experiment with and was sent to the old factory where they sold off parts they could not use on the factory floor,” Mike relates. “I bought a pile of parts, some partially assembled and some not. My first guitar did not look great but sounded good.” He subsequently bought several how-to books and joined a luthier group, The Acoustic Stringed Instrument Artisans (ASIA). “The guitar builder world is very ‘sharing,’ and there are lots of folks willing to help you get started,” he adds.
Growing up, Mike’s dreams were to play music and fly, and he has done both. He is a graduate of Purdue University with a master’s degree from George Washington University, both in the engineering field. “I joined the Navy out of college and went to flight training. I was fortunate to remain in flying jobs for 15 years, which is almost unheard of in the current Navy,” he says. He finished his military career teaching program management for the Department of Defense.
Mike has been playing music for 60 years, purchasing his first guitar for $8 when he was about 10 years old. “The action was so bad it was almost unplayable, but I played it anyway with very sore fingers,” he recalls. Next he bought an old Silvertone arch top guitar at a garage sale and learned to play on it. Finally, he says: “I saved enough to buy a Gibson 12-string from Manny’s in New York when I was in college.” He started a campus folk song club and coffee house on Friday nights at the student union. Later, he and several friends began a folk song venue in the back room of a deli in Plainfield, N.J., that became a huge success.
Over the years, Mike has taken a few music lessons but nothing serious. He plays all the bluegrass instruments except Dobro, with the banjo being his favorite. A Floyd resident, he likes participating in weekly jams at The Floyd Country Store.
It was not until Mears was looking for a retirement hobby that he started building instruments. He has built about 325 guitars, and while they are his main focus, he has also created some banjos and ukuleles just for fun. Fiddle maker Arthur Conner in Copper Hill bought one of Mike’s guitars and wanted to meet him. The two have become friends, and Conner showed him how he makes fiddles. “It is a totally different thought process from guitars and is more difficult with the carved back and top. I’ve made about 15 fiddles so far, and I think they are sounding pretty good. Fiddle techniques are similar to mandolin making, so I started making mandolins as well. I particularly enjoy fiddle making because it is more challenging, and there is no way to tell what a fiddle will sound like until you string it up.”
At one time, Mike taught guitar building: “I asked the Woodcraft store owner in Springfield, Va., if he would consider hosting a guitar building class once a year and he agreed to give it a try. I really wanted to see how much I actually knew by trying to teach others.” That continued for about 15 years until Mears and his wife, Liz, bought a house in Floyd. With no convenient place to teach in the New River Valley, plus his desire to focus on creativity, Mike concentrates on the building and repair of instruments. He is a Martin accessory dealer, as well as a Black Diamond and D’addario / Planet Waves dealer. “These are the top brands for musical instrument accessories. I do not plan to ever sell inexpensive, low quality instruments or supplies.”
Windy Hill GuitarWorks is a one person show with only word of mouth marketing. Rather than open a storefront, he sells through existing stores to support local businesses and avoid the bookkeeping involved with selling instruments himself. Still, people are welcome to drive out to see him or call or email to order supplies and accessories. Mike and his wife, Liz, chose the New River Valley for retirement. “We really like Floyd and being part of the community. We have met many wonderful people and love our place on the Little River – except when it floods,” he says.
Mike enthuses about his favorite parts of the job: working in his studio; looking for ways to improve his instruments; and interacting with new folks, whether customers, other musicians to jam with and or other builders who share techniques. “It is very difficult to make a living building and repairing instruments. I do this because I enjoy it, and my motto is: ‘Life’s too short to play a bad guitar’.”