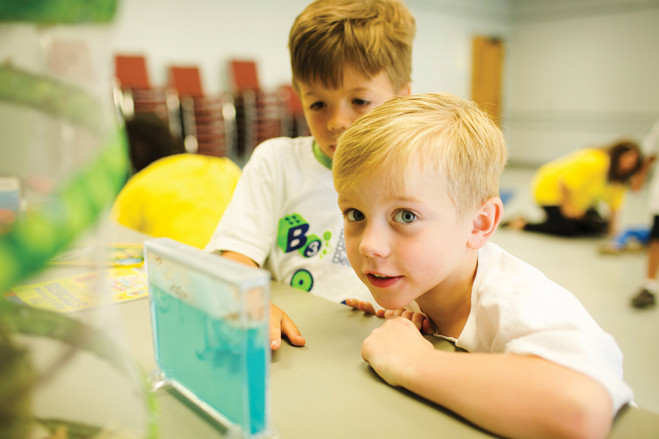 If you’re going to make an omelet, be ready to crack a few eggs. And if you’re going to teach STEM activities [Science, Technology, Engineering, Mathematics], be ready to make a mess. The Bricks Bots & Beakers (B3) franchise embraces this philosophy with open arms and rolled up sleeves. The names of their summer camps say it all — Gross Out Chemistry, Wizards Potions Lab, BUGS Elementary Entomology and Gross Anatomy to name a few.
Lindsay Barron, director for the Blacksburg area B3, recognized the growing demand for STEM education for elementary aged kids more than a decade ago while working as a preschool enrichment educator with The Whole Child Learning Company.
“As a graduate of Virginia Tech with a degree in Family and Child Development/Early Childhood Education, my training was firmly based in Piaget’s constructivist theory, which approaches learning as an active process of constructing knowledge rather than acquiring it,” says Barron. She designed the Bricks (engineering/architecture), Bots (robotics/coding) & Beakers (science/chemistry) framework to take advantage of the natural learning style of children, which is: “Hands on, minds on.”
“The best hands-on learning engages more than one of the senses, so a child becomes more fully immersed in the experience and activates more parts of the brain,” Barron explains. “Kids do this naturally in play, and when we create learning experiences that engage kids more deeply, they learn more and love the process.” It is not unusual for Barron to hear one of her students exclaim: “This is the coolest thing I’ve ever seen!” or “I love science!” And that, she says, is what it’s all about.
“Science is literally the first letter in STEM, yet it’s so often overlooked,” she continues. “There are many obstacles to teaching science in the elementary schools such as classroom time, budget, the mess factor, and the teacher’s comfort level with the subject matter. It can be hard to do really great hands-on science consistently in an elementary school classroom. Also, in Virginia, the Standards of Learning tests [SOLs] don’t really include things like chemistry where you can get into the cool chemical reactions that captivate kids until middle school or high school.”
With 15 franchises and counting, the B3 enrichment program proudly serves more than 5,000 children annually, offering STEM classes and programs throughout the year. Parents can take advantage of summer camps, early release day camps, as well as holiday and snow day camps when they may be scrambling for childcare or entertainment options for their children. B3 also hosts kids’ birthday parties and field trips for preschool and daycare centers.
“We ran our first camps the summer that Montgomery County Public Schools extended the summer by two weeks,” Barron relates. “I had been wanting to test out day camp programming, and I knew that parents would be looking for activities for their kids during those weeks. I got in touch with Jack Leahy, the assistant director of Parks and Recreation for the Town of Blacksburg (now retired) and presented the idea of running a few camps.”
Those camps did so well that Barron decided to run additional camps on Saturdays in the fall and winter and eventually expanded to run camps all summer the following year. Parks and Rec had offered a few science and technology camps before our program, but we really expanded the offerings into LEGO and Chemistry and a wider variety of STEM topics. We learned a lot about working with a municipality and how great that partnership can be,” says Barron.
After establishing the Blacksburg corporate territory, B3 opened franchise territories in Plano, Texas, then Jacksonville, Fla., and Oahu, Hawaii. At first, they would choose an area, hire teachers and run it as a company-owned area. However, they found the quality of the experience for the parents enrolling their children and the kids taking the classes and camps was best when there was local ownership such as being a franchise owner.
“Franchising can be pretty competitive when you are trying to get your message out, and we have a pretty narrow niche,” Barron declares. “You really have to love kids, education and all things STEM. We have grown organically to this point, mostly by word of mouth.”
Creating a new camp from scratch, such as a half-day camp which will typically run for 4 or 5 days, can take Barron anywhere from 80 to 100 hours to develop. This includes researching activities, writing and planning lessons, sourcing materials and designing student worksheets and other components. “We don’t let making a mess get in the way of a great learning experience!” But she has gotten smarter about the cleanup, so kids can spend more time soaking up knowledge, and educators can spend less time scrubbing up desks.
So what’s next for this burgeoning B3 company? “We would like to establish 10 to 15 more franchise territories in the U.S. and look to enter our first area outside the country, most likely Canada. We have received interest from a few different countries, but are also excited to sell franchises in Virginia, North Carolina, South Carolina and Georgia.”