3 years ago
Home Away from Home for Humans and Horses 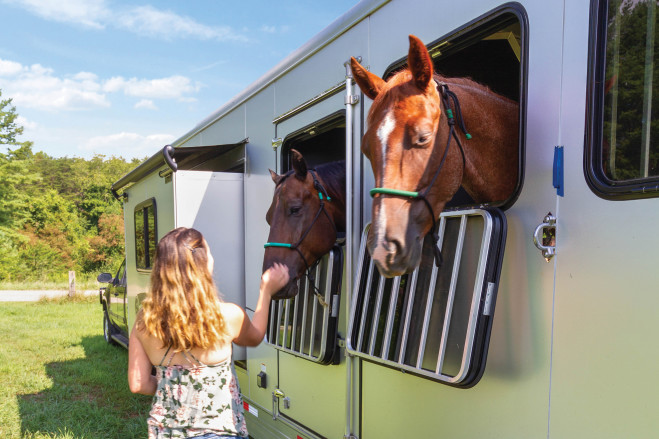 Sarah and Nick Canevari love animals. On their farm in Floyd, the married couple – both veterinarians at Town & Country Veterinary Clinic in Christiansburg – care for more than 60 creatures, including cats, a dog, chickens, guineas and miniature donkeys. Their Quarter Horses are provided the most sophisticated transportation: a 2018 3-horse, dual-axle, four-wheel Shadow horse trailer with living quarters.
Weighing 6,500 pounds and capable of bearing an additional load of 10,000 pounds, the trailer is stout and impressive. “We had to buy a truck to match the trailer,” Nick relates, referring to a 2013 GMC Sierra 2500 Duramax with a gooseneck hitch.
The couple bought the trailer new and have already taken it out west multiple times to South Dakota to buy horses, and to Colorado where they were married in 2018. On their wedding night, because the ranch where they held the ceremony was fully booked, the newlyweds slept in their new trailer. The living quarters, all things considered, are spacious. “It literally has every spec we wanted,” Nick adds.
In the forward portion of the living quarters, a step-up platform leads to a California king bed, in the elevated section where the trailer connects to and rides over the bed of the truck. The middle part of the living quarters includes a living space with sofa and kitchen with a 2-burner propane stove, microwave, small fridge and exhaust fan. This section also has a slide which increases the width of the living quarters when travel has stopped and the rig is parked. “The slide was definitely a selling point,” states Sarah. “There’s also a lot of storage space.”
The rear of the living quarters has a complete bathroom with toilet and full hot water shower. The back wall is slanted to accommodate the slant design of the stalls in the rear of the trailer.
Locally, the Canevaris use the trailer to take their Quarter Horses to a trainer in Hillsville, where the duo practice the techniques measured in Versatility Ranch Horse Competitions: roping, reining, cutting and more – the skills required of western performance horses and their riders.
The Canevaris participate as amateurs in ranch horse competitions, having started competing about two years ago when looking for something more than just trail riding. “Competitions are intense,” Nick explains. “It’s an adrenaline rush, going full speed, spinning, stopping, turning. Quarter Horses can manage it because they have such thick, powerful hindquarters.”
“Our horses,” Sarah says, “seem to really like cutting,” or the process of handling a lone cow separated from its herd. They own five Quarter Horses, all geldings, and recently purchased a brood mare with which they plan to raise their own Quarter Horses. “We’re hoping more people catch on to how fun competing is.” Nick used to work as a contractor, and they have built a horse barn and riding arena at home for regular practice.
The rear of the trailer has two side-opening doors. The door on the right is where the horses step into the trailer, and the left door encloses the trailer’s tack storage, fitted with a convenient slide-out saddle rack. Apparent on the outside of the trailer are utilities which support life inside the trailer – propane tanks, a battery, satellite dish. Tucked behind the sidewalls are tanks for fresh, grey and black water. There’s also a spare tire mounted on the front wall of the trailer’s main enclosure.
The battery runs the lights and microwave, and there is a generator which powers an air conditioner. Some of the appliances are barely used. Instead of using the satellite dish, for example, the Canevaris usually watch DVDs. And the stove is used only for light cooking like boiling water and such. More involved cooking they do outside over a portable grill.
Sarah credits their decision to cook mainly outside to the fact that the trailer still smells new inside. That’s something the Canevaris appreciate when they are at a show in summer and have time to take a break between rounds, enjoying fresh air and the clean smell of their home away from home.
The trailer provides a nice interlude before they get back out to participating in the competitions. “It’s one of those things,” Nick declares, “that when you do it once, you can’t wait to do it again.”