6 years ago
FUN IN ACAPULCO 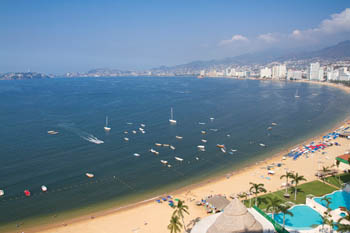 For those of you who are Elvis fans, you might have seen the 1963 musical comedy film “Fun in Acapulco”. You know, the one where Elvis gets a job as a singer and a lifeguard in a hotel in Acapulco, Mexico? Well, several years ago, my mom remembered the lead single from the movie, “Bossa Nova Baby!” and there was no turning back – we were going to have our own vacation fun in Acapulco!
Playa Condesa is probably the most crowded and well-known beach in the city on the Acapulco Bay (Santa Lucia) side. The beach attracts many food and handicraft vendors. Bring your bargaining skills, along with your pesos and broken Spanish to get the best price. Sometimes you can even haggle for beach chairs and umbrellas. Ask the fellow renting if that’s the best price, then say what you’re willing to pay for the whole day. Most likely you’ll strike a deal worth watching all day beach drama unfold in front of the backdrop of the calming Pacific Ocean.
One of the most remarkable peddlers was a man selling fresh, whole mangoes. The juicy fruit, peel off, was sliced like a tulip with a stick in the place of a stem. Hot chili powder was sprinkled on top giving the mango an enticing burst. I believe the other tourists along the beach were seduced by the fruit, too – my mom, an immigrant from India, eagerly bought one. She, however, refused to share, warning us that our “American stomachs” probably couldn’t handle any bacteria that might be left over from washing and preparation. She was right; several tourists complained that their loved ones got “Montezuma’s Revenge” after eating food sold on the beach.
There are other activities, besides eating, that are less dangerous – well, depending on if you’re a participant or a spectator. My brother and I decided to parasail – the water activity where they strap you to a parachute and pull you over the ocean with a long cord attached to a speedboat. My mom was hesitant to leave us at the mercy of an overly-eager, Mexican fast-talker who convinced us it was totally safe and very fun. My brother and I were insistent, but as we sailed over the ocean, the wind changed, and we realized my mom’s concern. We skimmed over the beach and clearly drifted closer to hotel buildings than water. Although we were thrilled, my mom swore she wouldn’t let us do that again. Perhaps parasailing would be less risky further down the beach at Playa Icacos. This strip of sand is the largest beach and home to a recreation area and all the same water sports — minus the vendors and crowds.
No trip to Acapulco would be complete without that famous scene in the Elvis movie when he performs a death-defying dive off the huge cliff of La Quebrada. The famous cliff divers of Le Quebrada are celebrities themselves and completely worth the price of admission. Since 1934, they have leapt from 148-foot jagged cliffs into deep water, fearless and unguarded. The show usually takes place in the afternoon when the tide comes in, but sometimes divers leap at dusk which makes watching even more nail-biting. It might not be Elvis successfully landing in the water, but the experience you witness is equally as legendary.
Krisha Chachra is Vice Mayor of the Town of Blacksburg, a world traveler, and a regular columnist and author.