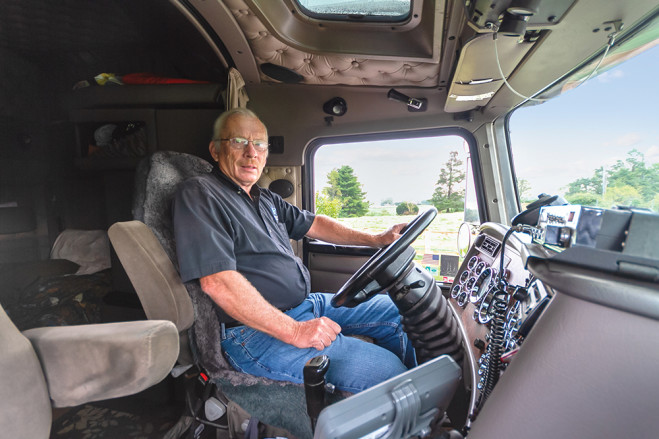 Most commutes in the New River Valley aren’t too far – Dublin to Radford, Floyd to Christiansburg, Riner to Blacksburg. 8, 10, 18, 24 miles give or take. Tommy Stiles takes a much longer road to work, however. In fact, his workplace is the road.
Stiles is an over-the-road trucker who for 20 years has driven a regular weekly haul from Atlanta to upstate New York and back. The route takes about five days and begins and ends at Stiles’ home in Childress with views of Calfee Knob and Pulaski Mountain.
An owner-operator, Stiles has driven for the transportation and logistics company Landstar for 36 years. Last year, Landstar recognized him as a Four Million Mile Safe Driver, an honor reflecting the many safely driven miles Stiles has logged.
Stiles drives a 2003 Kenworth Studio Sleeper, which he bought new in 2002. “At the time, this was the Cadillac of conventional long-nosed tractors,” he relates. The rig features a 600hp Caterpillar diesel motor, two 150 gallon fuel tanks, an 18-speed transmission, air brakes and air-ride suspension. The instrument panel has an array of gauges, including ones to monitor fuel pressure, transmission temperature, rear-end temperature, engine air temperature and external air temperature.
“It used to be we would gauge when there might be ice on the road by when it would freeze up on the mirrors. Now we have heated mirrors that don’t ice up like they used to. That’s why the outer air temperature gauge is important,” explains Stiles. There are plenty of mirrors on the Kenworth – three on the driver’s side and three on the passenger side, including one which is oriented downward to allow the driver to see what’s adjacent to the passenger side of the cab.
The term “sleeper” truly describes the space of the tractor’s cabin. Behind the two front seats is a roomy space with two beds, two closets and a refrigerator. Tommy stocks drinks in the refrigerator before he heads out to save the cost of buying refreshments on the road.
But to Stiles the most important part of the cabin is the driver’s seat and its controls. The steering wheel has controls for the jake brake and cruise control, and on the panel is an AM/FM radio and a CB radio. He doesn’t always listen to music or news while driving. “Sometimes I ride and just listen to the motor. I can go for days and not listen to any music.”
Stiles started out as a local trucker, at first driving for someone else before getting his own dump truck. Over the course of four years, he grew his local haul business to where he owned and operated two dump trucks and one fertilizer spreader truck. When the economy soured in 1981, Stiles switched to 18-wheelers.
“Long-distance hauling is a different lifestyle,” he reflects. “You’re on your own. It’s kind of a challenge to own your own truck, and not everyone wants to do it. When you’re sitting up in this truck you see so much that people in a car don’t ever see. Just getting out there and seeing the country, there’s something different every week.”
For Stiles, the worst thing about driving big rigs is small parking lots. He has had five road tractors in his career. His first two, a Road Commander and a Marmon, were cab-overs, meaning they were flat-faced, with the cab atop the front axle. The first one also had spring suspension rather than air suspension. His last three tractors have been Kenworth.
“I started out with nothing,” he shares, “but I had good support. My dad, Lloyd, always helped me, not with money, but with advice. He helped me make decisions when I was 20 years old and looking to buy a dump truck. Throughout my years trucking, he was always around. He helped me change tires. Four years ago he died, and I very much miss him.”

Stiles does the mechanic work on the tractor himself, changing the oil – 10 gallons worth – every 15,000 miles. He has a large garage behind his house which he and his father built in 1978. Under the hood, the major parts of the tractor have been rebuilt “from the front to the back,” he states. “Radiator, engine, transmission.”
Stiles and his wife Nina have been married 45 years and raised two children. Now he is looking to slow down from the trucking life and spend more time at home where he keeps a small cow-calf herd. At one point, Stiles made the run from Georgia to New York and back for 127 straight weeks. “I was always home on the weekend, but gone the five days it takes to make the run ”Lately he has been doing the same drive 45 to 50 weeks a year. “I like to work, and I’m used to trucking.”

He worked in a factory once, for eight weeks. It didn’t take long to figure out it wasn’t for him. “Here,” he grabs the steering wheel, as he has countless times before, “I’m all right.”