2 years ago
Football kicks and kickers 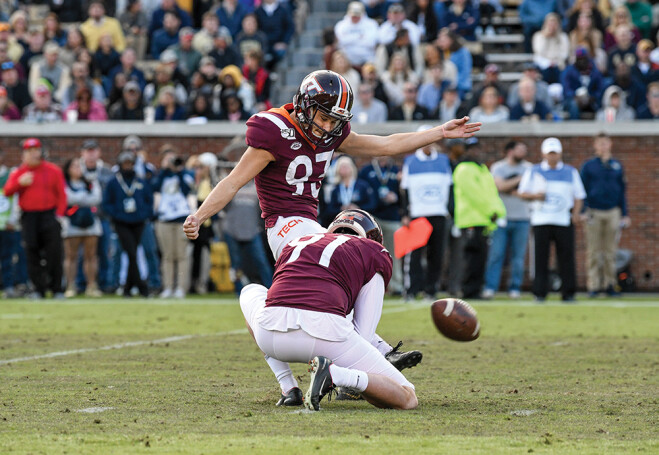 As a football game unfolds, the fans watch the snap, the run, the pass, the handoff, the play execution as team members in different positions move every which way. Someone simply cannot watch every player every second. But when the place kicker or punter steps onto the field, all eyes are trained on him. He might stand out on foul weather days for having the cleanest uniform on the gridiron.
Pressure? Oh yeah. Important? You bet. Place kickers in the National Football League are billed as the most important players for being the highest scoring ones. They get the most opportunities to score and those extra points and 3-point field goals add up. Adam Vinatieri, 47, holds the record with having scored 2,673 points. His longest field goal is 57 yards, and his field goal success average is 83.8%. Something to aspire to.
And aspire they do. The Virginia Tech team’s kickers this year are:

• Brian Johnson, #93, redshirt senior from Washington, D.C.; finished last season with an 82.6% field goal success rate, not missing any one of them inside of 40 yards.

Kicking has not always enjoyed its own keen, well-trained, seriously-focused personalities. Even in the late 1960s, a running back or back-up quarterback or offensive tackle would get out and kick the ball when necessary. He was referred to as the team’s “toe” when called upon. Before the game, someone might ask: “Who is your ‘toe’ today?”
Then the true kicking position evolved along with an appreciation for the points a kicker can add to the score and all the difference it can make in standings, bowl games and championships.
Almost all of the college kickers come up through high school football, and many played soccer in middle school. The late Peter Rajecki came to the U.S. from war-ravaged Germany at age 16. He never knew his parents and did not read or write English. But he dreamed of being a place kicker when he learned about American football, transforming his informal soccer experience as a kid into playing for the University of Georgia and going pro with the NFL. Kicking camps and specialized coaching are available around the country now.
The place kicker kicks the field goals and kickoffs and tends to kick soccer-style, from a few steps to the left and behind the ball, as opposed to straight toe kicking. In both cases, the ball is held or set in place, and his job is to kick it from wherever the offense has stalled on the field, and where the coach has enough confidence in his ‘toe’ to give it an attempt. The ball must go over the players and cross bar between the goal posts, into the end zone or as close to the 1-yard line as possible. Most place kickers wear special shoes like soccer boots, and very occasionally, one kicks barefoot. Kicking barefoot in high school is banned everywhere except Texas, and no longer does anyone kick barefoot in the NFL.
The punter can be a different kicker – or not – whose sole objective is to send the pigskin as far and as high as he can. A good punter can evaluate distance and force so he sets up an advantageous field position for his team.
Place kickers and punters are not often in the fray of running, tackling and getting tackled. Too valuable a team commodity, a coach will tacitly place his kicker as a ‘safety’ on a punt return, lessening the chance of contact and injury. The most common injury for kickers include thigh strains and lower extremity muscle-tendon injuries, usually the hip adductor or hamstring, caused by kicking.
The two penalties involving kickers are roughing the kicker or running into the kicker. The first one carries a 15-yard penalty and automatic first down for the kicking team. The second one is a 5-yard penalty, and it is still 4th down, unless they were 5 yards or less from the scrimmage line, in which case, they will enjoy another first down.
All the kickers on the Hokie team have numbers in the 90s. Kickers and punters are frequently numbered in the 40s or 90s, which are the least in-demand numbers on a college roster. No team is allowed the number zero. Only two players have been permitted to wear the number 100 in National Collegiate Athletic Association history. Both were place kickers. West Virginia’s Chuck Kinder wore 100 in 1963 in honor of the Mountain State’s 100-year anniversary. Bill Bell sported the number 100 at the University of Kansas in 1969 to commemorate 100 years of football.
So, when one of these VT kickers steps out on the field, knowing there are hundreds of thousands of eyes watching only him in person and via television, be gentle with any criticism and lavish with the praise. That spotlight moment, the hero or goat in the blink of an eye, carries immense pressure. It’s a real kick, literally and figuratively.