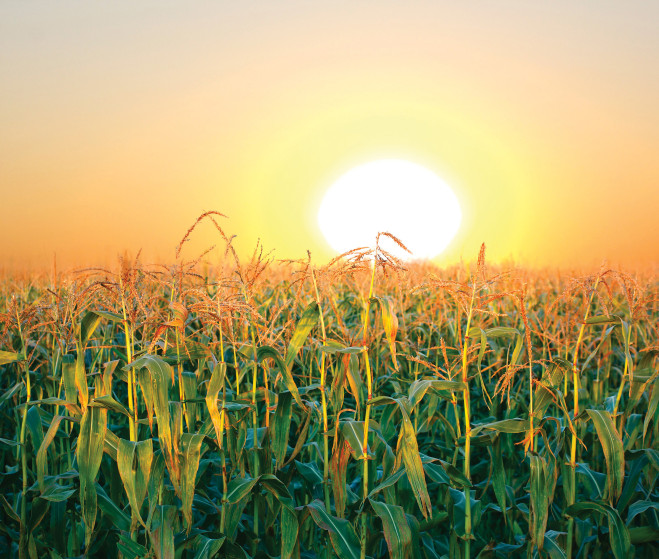 As with most noble occupations, you can learn a lot of life lessons from a farmer. My grandparents, Sam and Annie, were farmers. Their parents were sharecroppers, and I would guess their grandparents were as well. Like most Depression-era babies raised on a farm, they only went to school until they could be productive in the field. For them, that was 3rd grade. Even with very little formal education, both were among the smartest people I knew. And though I don’t think either of them ever bought a stock, bond or mutual fund, everything I needed to know about managing investment portfolios, I learned from them.

Modern Portfolio Theory on the Farm
My grandparents lived in southeast Virginia and grew three primary crops: corn, soybeans and peanuts. They knew from experience (historical performance data) that these crops could survive the region’s hot, humid climates and sandy soil. Instead of trying to guess which one crop would be the most profitable in a given year (single stock risk), they would plant some of each (diversification). The crops were different enough (uncorrelated) so if weather didn’t cooperate, there would still be a chance at least one would do well enough for the farm to break even. Of course, there were a few years when all three had outstanding harvests and other years when none did particularly well. That was the risk they took by being farmers (market risk).

Improving the Odds of a Successful Harvest
Like with investing, beginning with historically successful crops (asset classes) and diversifying among them went a long way toward being profitable. They could have stopped there and done reasonably well. But they didn’t. Like most successful farmers, they used indicators to help them make the most of each year.

First of all, Sam and Annie had an accurate long-term indicator, the calendar, which let them know when to be ready to plant and approximately when to harvest. They also used a reasonably accurate short-term indicator, the weather forecast, to improve their success. In the spring when the forecast was for dry weather, they knew it was time to get the crop in the ground. If the forecast called for rain, instead of risking a stuck tractor or having the seed wash away before it could root, they would wait for a more opportune time. Unfortunately, investors don’t have equivalent indicators with the same accuracy, but that doesn’t stop us from looking.

The Farming Channel
Although there was no equivalent to CNBC where Sam and Annie could sit for hours each day and watch farming experts tell them whether corn or soybeans would do best that year, they did subscribe to “The Old Farmer’s Almanac” (investment newsletter). This publication would confidently predict the weather for the upcoming year. Though I don’t think they put much confidence in its predictive abilities, it made for good conversation.

Getting Better Each Season
Over the years, my grandparents made use of new products and techniques. A few were easy decisions, like switching from mules to tractors. Others weren’t as obvious such as “new and improved” seeds and fertilizers that came out on a regular basis.

Being conservative people, it would have been easy for them to not make any changes. However, they knew that ignoring proven products and techniques would be detrimental to their long-term success.

Similarly, at every conference I attend, there are sessions about how to improve portfolio performance. I also get calls and emails on a weekly basis from companies with “new and improved” investment products. Through additional research, I find most of these are no better, and sometimes worse, than my current process. Every now and then, however, I find something worth implementing. I could save a lot of time and energy by not looking for ways to improve portfolio management. However, I wouldn’t be fulfilling my obligation to look out for my clients’ best interests.

Stick to the Process
The most important thing my grandparents did was stick to a proven process. They knew that if they used techniques and products which stood the test of time, made improvements when warranted and embraced patience, success would follow. Following these principles would keep them from taking on too much risk. They wouldn’t have a lot of fantastic years, but they also wouldn’t go broke. Likewise, in managing investment portfolios, by sticking to a proven process and having the patience to let it work, I know the probability of success over time is much higher than switching to an entirely new strategy every few years.

If Sam and Annie were around today, I would love to sit down over a bowl of Annie’s butter bean soup and homemade biscuits and thank them for the investing education they provided. As that’s not possible, this will have to do.

Michael R. Jones, CFP®, donned an entrepreneurial hat this year, starting Ataraxia Advisory Services in Christiansburg. He holds a B.S. degree from Virginia Tech and an MBA from the Krannert School at Purdue University.
www.ataraxiaadvisory.com