2 months ago
Falconry in the Family 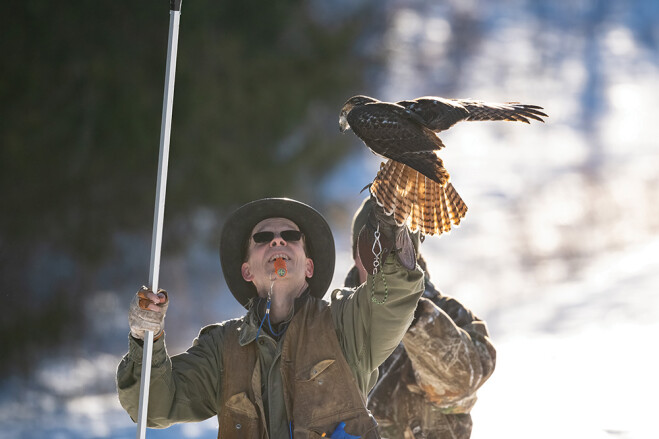 In a reversal of following in footsteps, Marc Manley indulged himself in falconry after his son, Kennet, pursued the ancient sport in high school. “Kennet began his apprenticeship in 2014, and after watching him, driving to meets and observing the fascinating raptors and their relationships with their handlers, I wanted to participate,” Marc recalls. The time required every day is substantial, and Kennet’s pursuit went on hold when he went to college. But, the Manley home was not without a hawk as Marc stepped into the world of trained raptors.

Falconry is an ancient sport recorded in Japan in 244 AD, and woven in a tapestry showing King Harold with a trained raptor on a visit to William of Normandy in 1064. The North American Falconers Association (n-a-f-a.com) was established in 1961 “to encourage the proper practice of the sport of falconry and the wise use and conservation of birds of prey.”
Raptors are medium to large birds which prey on other animals, even small birds, for sustenance. Generally they hunt living critters like mammals, insects and fish and do not dine off carcasses. Vultures are an exception. They possess incredible vision for seeing living food sources while in flight from on high. Their feet have talons which both capture and kill their meals. The word “raptor” comes from Latin where “rapio” means to “take by force”.
Keeping a wild raptor is regulated by state and federal laws. The U.S. Fish and Wildlife Service test covers basic biology plus care and handling of raptors. The Virginia Department of Wildlife Resources has a falconry permit exam with more than 100 questions. Its housing and equipment must be approved by a biologist from the department before one can trap a bird. According to Marc: “Falconry is considered the most regulated sport in the US, if not the world.”

Becoming a falconer is a major, serious commitment measured in years, education, diligence, money and time. It is an everyday devotion. The apprenticeship alone is a minimum of two years, and acquiring Master Falconer status is a 7-year or more pledge to the sport.
“I am called a falconer and I am licensed (at the General permit level) to practice the art and sport of falconry, which is strictly defined in the regulations as the taking of wild quarry in its natural state and habitat by means of a trained raptor.”
Marc has hunted often in the New River Valley with fellow falconer Tony Pierson. “When we hunted together, we took turns with our red-tailed hawks. You generally can’t fly them at the same time. The only species of raptor I am aware of which will fly cooperatively is the Harris’ hawk. I have had the privilege of watching seven Harrises flying on the same hunt. It was fascinating.”
When taking out the bird for a hunt, it has been well-enough fed to be strong, with just an edge of hunger that will promote its hunting and return. Many sports enthusiasts outfit the raptor with a pair of bi-metal brass and bronze acorn bells. Some folks use a transmitter. “I use the bells to be able to find my bird if it strays a bit or goes down on the quarry,” Marc explains. “Sometimes it’s hard to find one in thick undergrowth, and the bells help.”
Even a hunt which comes up “empty-taloned” is like an adventure. It’s a great excuse to be outside during the hunting season, Oct. 1 to March 31. Marc likely speaks for a great many falconers when he says: “Having a wild raptor fly to your fist never gets old. It can be especially awe-inspiring to call the bird to the glove, watching it gracefully weave through trees in a steep descent, alternately tucking its wings for the tight spaces and then spreading in the open to maintain loft.”
Many wild raptors which falconers enjoy caring for, training and hunting with are eventually released into the wild. “We do not use the term ‘pet’ for a raptor. Our birds remain wild while under our care. It will take only 24 to 48 hours after releasing back to the wild for the hawk to revert to a full wild state, avoiding humans completely, including its handler,” Marc explains.

Marc grew up an Air Force brat, and after his own stint in the USAF, he moved to Oregon for a decade. There he married his wife, Dorcas, who knew they would settle down elsewhere. “I had traveled the entire U.S.,” Marc relates, “so I had a sense for what appealed to me.” With his wife’s list of places she did not care for, they narrowed it to four seasons, not urban and small college town for its stable economy. He likes the line from Lemony Snicket’s “Series of Unfortunate Events”: The world is quiet here.
Though not part of the life plan, it happens to be an outstanding place to fly a hawk! “the New River Valley is game rich with plenty of friendly folks happy to generously allow us falconers to fly our raptors on their land.”
Marc, a former licensed architect, offers residential design services for every budget and style through his company Skia Design. His slogan is Inspirational Design ~ Affordably Priced. [skiadesign.com] Meanwhile, back on topic, Marc is a newly appointed board member on the Virginia Falconers’ Association Board of Directors, and will be involved with an experimental team approach to sponsoring a new apprentice. There are only 100 or so falconers in Virginia and perhaps some 4,000 across the country. The end goal of the team method is to share the huge responsibility of one person taking on one apprentice for at least two years. Hopefully, with more falconers as mentors and sponsors, more apprentices can come into what is one of the most fascinating sports on the planet.