1 year ago
Exploring Virginia’s section of the Appalachian Trail 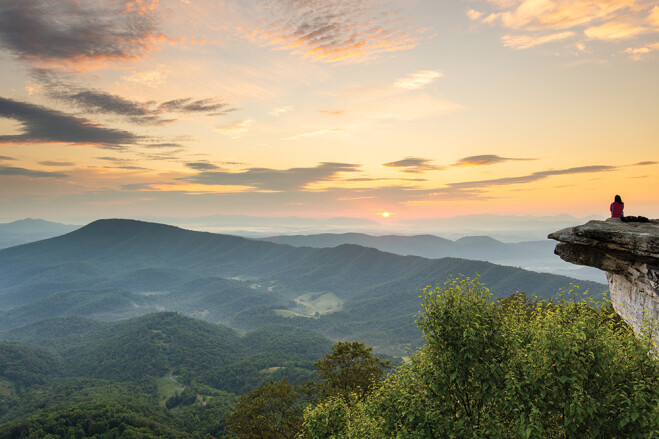 In order to assay the grandiosity that is the Appalachian Trail, one need look no further than the inspired words of author and novice hiker Bill Bryson (“A Walk in the Woods: Rediscovering America on the Appalachian Trail”):
To my surprise, I felt a certain springy keenness. I was ready to hike. I had waited months for this day, after all, even if it had been mostly with foreboding. I wanted to see what was out there. All over America today people would be dragging themselves to work, stuck in traffic jams, wreathed in exhaust smoke. I was going for a walk in the woods. I was more than ready for this.
Spanning from Springer Mountain in Georgia to Mount Katahdin in Maine, the 2,193.1-mile linear footpath ambles along 14 eastern states. It took more than a decade to build and was declared completed in 1937, though improvements and minor reroutes continue.
In fact, this year commemorates the 100th anniversary of Benton MacKaye’s article entitled “An Appalachian Trail: A Project in Regional Planning” that inspired the creation of the famed trail system. Published in the “Journal of the American Institute of Architects,” the article refers to the divides and ridges of the mountain chain as the “Appalachian skyline” and pitches the benefits that recreational development of the area could have being within a day’s drive from more than half the nation’s population.
The Commonwealth of Virginia hosts a solid quarter of the entire trail, clocking in at 555.1 miles. Here in the New River Valley, the A.T. is often, quite literally, in our backyard. Our proximity to America’s longest hiking-only path in the world is not only convenient, but also feels kindred.

This section includes Mt. Rogers, Virginia’s highest peak at 5,728 feet in elevation. Damascus is home to the annual Trail Days celebration every May. Now in its 34th year, the festival has been known to attract as many as 20,000 attendees. Continuing north, Dismal Creek Falls is a picturesque spot that sits just .3 miles off the A.T. After Angels Rest, a popular 5.6-mile summit outside of Pearisburg, the A.T. crosses the New River along a bridge on Route 460 (try to spot the hallmark white blaze trail markers painted on the bridge.).
The trail then turns up to Rice Fields (5.1-mile day hike) and straddles the West Virginia/Virginia border along a ridgeline for 10 miles. In the the Mountain Lake Wilderness, the largest wilderness area in Jefferson National Forest, Wind Rock overlook is a drivable highlight, followed closely by Kelly Knob, an 8.2-mile day hike from Route 42 in Craig Country. Also just off Route 42, the Keffer Oak is a 300-year-old white oak tree and is the second largest tree on the Appalachian Trail.

Roanoke to the James River

Outside of Roanoke, this section contains colossally popular Dragon’s Tooth and McAfee’s Knob summits, two of the local “Triple Crown” designees (Tinker Cliffs being the third). Heading north along Tinker Mountain affords views of Carvin’s Cove Reservoir before crossing U.S. 220 in Daleville. In Bedford County, the trail teams up with the Blue Ridge Parkway for the first time, and the two journey together for eight miles.
An offshoot from the A.T., take time to visit Apple Orchard Falls before hiking along Apple Orchard Mountain (ironically void of apple trees). Pass through “The Face” (James River Face National Wilderness Area) with a side trip to Devil’s Marbleyard, a unique geographical destination featuring an 8-acre boulder field.

As soon as the trail crosses Interstate 64 near Afton, it begins to wind adjacent to Skyline Drive and eventually enters Shenandoah National Park. You can cross the A.T. more than 30 times in Shenandoah National Park without getting out of car. Big Meadows, the park’s largest open space, is a well-known destination for stargazing. The A.T. leaves Virginia just south of Harper’s Ferry.

We use the trail for many things, not the least of which as a refuge from the dance of everyday drudgery. Unlike more remote trails in the West, the Appalachian Trail affords us the lure of getting lost with the safety net of civilization. The foresight of those who crossed the proverbial bridge well before us is what gave us a bridge to cross at all.
Bryson eloquently states that woods, “… make you feel small and confused and vulnerable…” later adding, “…and they are alive.” Perhaps this is why more than 3 million people leave the pavement behind to pass the threshold of white blazes every year. Fatigued from being big, we desire a chance to be small, to lose control, to let the trail take care of us. The woods are alive, and we visit them in a desperate attempt to feel alive ourselves.