7 months ago
Cooking at Home is the New Going Out 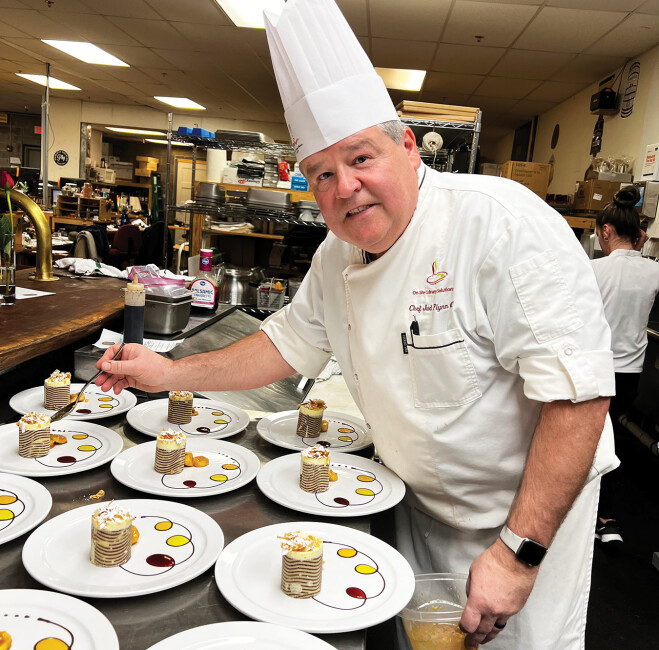 When I see Jud Flynn, he’s not dressed in chef’s whites, black and white houndstooth pants and the distinctive toque blanche (white hat) of the award-winning executive chef that he is. He is more likely wearing jeans, work boots and a plaid shirt, operating JD or Big Blue with an 800-pound round bale of hay on a spear, waiting for me to position my truck to accept the bale. JD refers to his large John Deere tractor. Big Blue is the large model New Hollander tractor, and Little Blue, his small New Hollander tractor, is stationed nearby.
Flynn grew up in Blacksburg and attended the old Prices Fork Elementary and Blacksburg High School. He spent summers in the tiny hamlet of Long Lake, N.Y., inside Adirondack Park, one of the first Forever Wild Forest Preserves in the country. There he worked beside his grandmother, who was a short order cook in the family restaurant. By the time he graduated from high school, Flynn had done dishes, prepped food and worked as a chef’s assistant. After a couple years in the culinary side of exclusive B&Bs in New Hampshire, he returned to Blacksburg.
Back in town, he served as sous chef under a Dutch-trained chef, who left the job, and Flynn took over as executive chef. “Though I was doing everything well, the respect for my work was not present from peers and others, so I attended the esteemed New England Culinary Institute in Vermont,” Flynn relates. “I learned a new way of analytical thinking which has served me well, along with the requisite diploma which then validated my culinary skills.”
He opened a couple restaurants in the New River Valley before spending 10 years as a senior executive chef at Virginia Tech. It was here that he met his wife, Heather Flynn, a graduate of Johnson & Wales, renowned for its culinary degrees. “It’s nice to have married someone also in the food service business,” Jud Flynn declares. “We have the same thought process and something we enjoy together, personally and professionally and as a family.”

His awards and accolades are extensive: [ACF = American Culinary Federation]

In 2008, Chef Jud founded On-Site Culinary Solutions LLC [onsiteculinary.com]. Though he has traveled the country offering training and development programs in the kitchen at several universities, the business now focuses on catering and classes. His skills and talents embrace an extraordinary breadth of food knowledge and experience. “Cooking methods and classical techniques are the backbone of a great culinary foundation,” he explains.
Cooking is not especially difficult, but cooking well is a craft that can be honed through demonstrations and hands-on lessons in the classes Flynn offers. His students include people of all ages from all walks of life, and any one of the classes is a fun experience for the home cook, couples, families, friends and small groups of any kind.
Chef Jud’s classes offer something for everyone in a relaxed kitchen environment. “Cooking at home is the new going out,” he offers, and classes cover a wide range of topics, like:

Gift certificates are available, and what a novel present for someone special, the kind of gift that keeps on giving. Not long ago, to mark the 100th anniversary of the German Club on Virginia Tech’s campus, he provided the ice sculpture in the shape of the club’s logo.
When not cooking or teaching, he and Heather might be found at Walnut Spring Stables, which they own. It sits on the old Hoge family farm owned by his brother Tyler Hoge and which, in the 1800s, was known for selling its hams to patrons in England. Their mother married into the Hoge family after Jud was born.
Whether sitting on a tractor outside or standing in a kitchen indoors, Jud Flynn enjoys the work at hand. I think I’ll order some eclairs or chocolate mousse with my next bale of hay. Hay for the horses and a sweet delight pour moi, n’est-ce pas?