10 months ago
Confronting Cancer across the New River Valley 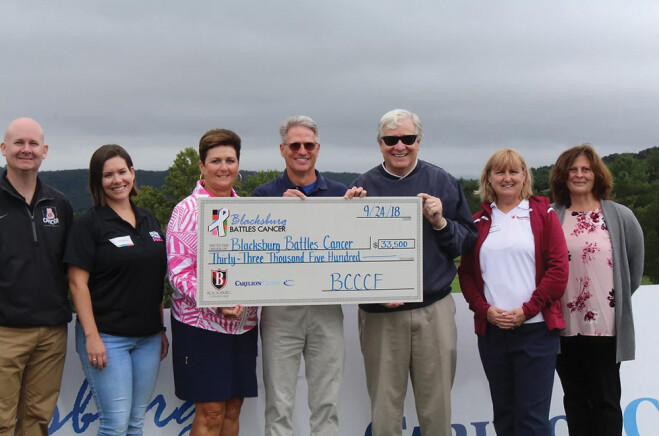 Of the 1.8 million people in the U.S. who are diagnosed with cancer every year, some are New River Valley residents, neighbors and friends. When Blacksburg Battles Cancer, under a different name at the time, held its first golf tournament in 2005, its mission to raise money for cancer research, patients and support systems was front and center.
Fast-forward to 2022, and the organization has broadened its fundraising efforts with new events to extend its impact throughout the region. In just the last eight years, the non-profit has raised more than $250,000.
An estimated 40% of the population will be diagnosed with some kind of cancer at some point in their lives. And what might have once been considered an old person’s disease now strikes youth as well. More than 16,500 kids up to age 19 are diagnosed with cancer each year, and about 10 percent of them pass away from the disease. Expenses for diagnosis, care, treatment, etc., top $150 billion annually.
On the local level, Blacksburg Battles Cancer spreads its donations into every county and Radford to:

Two benches were donated and placed at holes number one and 10 on the golf course at Blacksburg Country Club. Handsome, life-time guaranteed, engraved plaques to honor a loved one are available for $250 each. Plans are in the works for several new events launching this year and next, like a jazz and dinner festival, Kentucky Derby celebration, bourbon tasting, casino night.
Blacksburg Battles Cancer is completely volunteer-driven, and the money distributed stays in the New River Valley. In fact, the organization suggests that contributions to national cancer organizations – in life or in a Last Will – be directed locally, to strengthen the New River Valley in its resources to help our residents, friends and neighbors.
Cancer deaths are on the decline. It’s only by one and two or two and a half percent, but it’s heading in the right direction. Prevention, early detection, advanced treatments and targeted drug therapy are among the reasons. “It is encouraging to see a continued decline in death rates for many of the common cancers,” relates Karen Hacker, M.D., M.P.H., director of CDC’s National Center for Chronic Disease Prevention and Health Promotion. “To dismantle existing health disparities and give everyone the opportunity to be as healthy as possible, we must continue to find innovative ways to reach people across the cancer care continuum — from screening and early detection to treatment and support for survivors.”
If you’ve ever dropped change into a big jar, you know this common fact: It adds up. If you charge most of your monthly purchases, you know this: It adds up. And when you donate to Blacksburg Battles Cancer, which really battles the entire New River Valley: It adds up. If everyone in the New River Valley donated $20, that could add up to more than a couple million dollars! Imagine!