3 years ago
Community-Centered and Customer-Focused 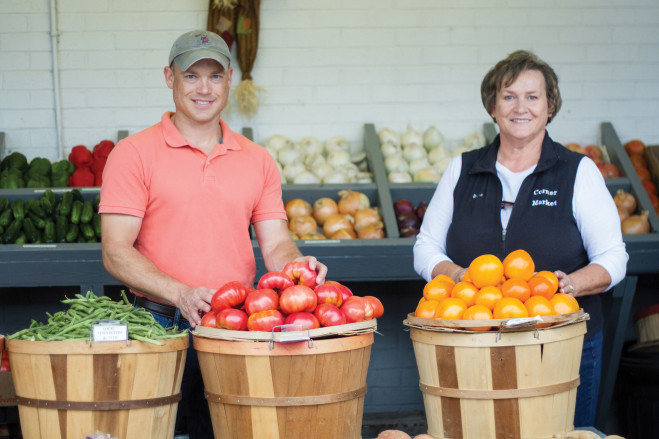 While the Corner Market Country Store looks like your typical gas-and-go food mart, a closer look reveals a locavore’s dream. Colorful fresh produce is abundant, along with gourmet items such as Amish butter and eggs and local honey. Of course, you can still grab a cup of coffee and a newspaper while paying for your fuel.
As Drema Thompson, Giles County native and owner of the Corner Market, likes to say, she comes from a long line of peddlers. Like her father and grandfather, she and her husband would take a 2 1/2-ton truck to the big farmers markets in North Carolina and Virginia to load up on produce, then go to several little towns and waysides in the New River Valley area to sell their goods. After the birth of their two sons, however, they got out of retail and chose different career paths, she in bookkeeping and accounting, he in law enforcement, including a State Police gig that took them to northern Virginia. Eventually a vacancy surfaced in Giles County, and they came home. Drema decided to return to her roots as well.
“Selling from a truck has low overhead, but loading and unloading is exhausting,” she explains. “You can lose a lot of perishable product, and the weather can really mess with your plans.” So Thompson started looking for a permanent place. When the Rich Creek property became available, she, her brother and his wife snapped it up immediately and within a month, in April of 2001, they were open for business.
The market is definitely on an important, visible corner at the intersection of Route 219 and Old Virginia Ave., which was U.S. 460 before the bypass was built. In 1929, Togo Spangler, son of Rich Creek’s first mayor, built a service station in the shape of an airplane at that location, hoping to attract the growing automobile traffic. A painting of this hangs in the current store. The attraction stood there until 1954, when a fuel truck clipped one of the wings and the whole structure was subsequently torn down.
These days, Thompson relies on friendly service and high quality produce to bring in the customers. She has contracts with many local farmers to sell their goods, some of whom go back to her truck days. Everything must meet her demanding standards, and she specializes in foods not found in chain stores, such as half runner beans. “We work with lots of small farmers so we can get a wider range of products than might be available from the big agribusiness producers.”
The produce is augmented with various preserved foods such as jelly, jams and syrups as well as pickles. There is a wide selection of old-fashioned candies that can be bought in bulk or by the piece. In addition to foodstuffs, customers can find decorative items like hanging flower baskets in spring and summer, potted mums, pumpkins and cornstalks in the fall and other seasonal decor. The store also stocks animal corn and bird seed.
The business remains a family affair. Thompson’s son, Adam, who as a teenager worked at the store, bought out his uncle and aunt’s share in 2014. While still working as a civil engineer for a regional construction company, he is busy in the business end, will work on weekends if needed and has definite ideas on how to be successful.
“It’s hard to keep a business going. Many flame out, but our core business principles are a commitment to service, in order to create a loyal customer base, a great product and good prices,” he explains. He figures 80 percent of the business are regulars, and that’s regional, not just local, with return customers from Roanoke to Beckley, W.V., and all in between.
Thompson is a bit of an economic engine, employing nine non-family members, four of which are full time. All are trained to emphasize the friendly service, including niceties such as helping customers pump gas or carry groceries to the car. “We want to be helpful and friendly, and not too overbearing,” states Adam. “It’s important that our customers get what they want. If the product is not good, we want them to bring it back, and we will get them another one.”
There is a huge commitment to community. “Our customers are so loyal to us, and we want to help support them,” Thompson comments. So you can find her donating peppers and onions for the spaghetti dinner at the high school or other products for an after prom party or drinks for the basketball team fundraiser. “We want to maintain a family business that’s valuable to our neighbors and be a community-based business.”

Text by Becky Hepler
Photos by Always and Forever Photography