2 years ago
Chroma-Extraordinaire a 3-act biography 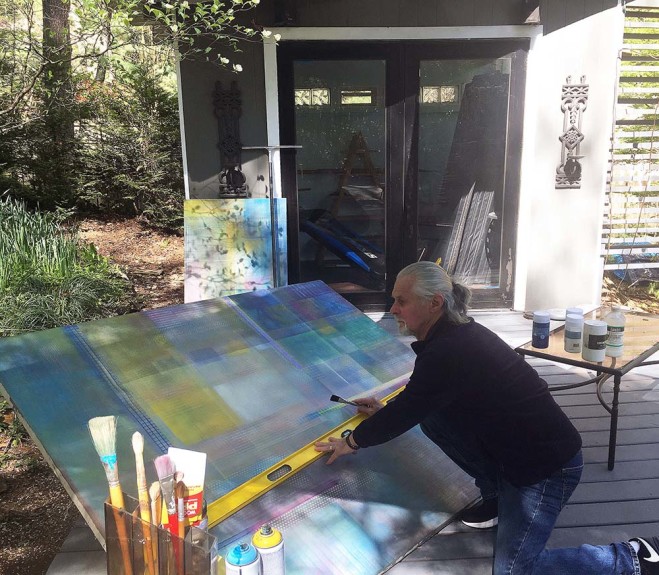 If Truman Capone’s life were a 3-act play, Act One would open in an elementary school in Pittsburgh. His artistic talent was recognized at a young age when he won contests for kids like drawing a poster for the humane society or a mural at school. “I don’t remember a time in my entire life when I wasn’t drawing,” he relates. He was named art director for a school mural and had the weighty responsibility of choosing which kids got to work on it with him.
“It’s like picking who plays on your kickball team, being pressured at times to select the one you know can’t kick or run, or in this case, draw or paint,” Truman recalls. Those events provided early lessons in diplomacy which helped shape his keen evaluation of skills and personalities. The later part of Act One features a 12-year-old Truman enrolled at St. Joseph Art Academy. Though an art school, he followed a business track.
In Act Two, Truman Capone is working as a short order cook, married to Faith Capone, the salad girl at the same restaurant. Both have art degrees from the prestigious Edinboro University where he went on a wrestler scholarship to major in economics. Once he took an art class, he switched his major and never looked back. He met Faith (proprietress of Capone’s Jewelry in downtown Blacksburg) fittingly in a jewelry making class in college. “We may not have been sure where we were going,” he explains, “but we both knew our uncertain future was definitely not in the restaurant business.”
Virginia Tech’s College of Architecture and Urban Studies caught Truman’s attention, and Act Three opens in Blacksburg with the Capones having left their native Keystone State. While architecture was intriguing, Truman’s creative spirit felt a little cramped. As family life arrived, he took a job doing biomedical illustration at the Virginia-Maryland Regional College of Veterinary Medicine. He worked there more than a decade, assisting with hiring fellow artist and well-known portrait artist, Leslie Roberts Gregg.
“I found Truman to be one of the most creative, inspirational individuals I have ever worked with,” states Gregg. “He is highly skilled and when presented with a challenging project, he always had a unique approach and great vision on how to make it successful. He was a wonderful artist, but once he had time to concentrate on his own art creations, his work in the fine arts took off.”
On the side, Truman was sketching, painting and teaching, but to step into Virginia Tech’s tenure Visual Community Design program, he needed the coveted Masters in Fine Arts. Once he finished his MFA degree at Radford University, he was instrumental in founding and teaching in VT’s School of Visual Arts (SOVA). He even had studio space, small studio space, in a basement, in an old building on campus. But hey, it was still a symbol of his validity as a genuine artist. With his architectural and construction knowledge, he has expanded their home to include an outdoor studio space built to meet his artistic parameters, interior and exterior utilization depending on the scale and mediums being used in his creations. These studio spaces were modeled after Penland School of Art in North Carolina where he and Faith spent summers in the early 1970s.
Chrome has come into English via French from the Greek words chrôma for color and chr?mos “having color”. Known internationally for his Chromatic Helix and Chroma Series paintings and his collages, Truman Capone has shown and won awards all over the world. When asked his favorite colors, he replies: “Reds, blues, primary colors,” and his favorite media are watercolor and acrylic or some combination.
Truman’s art life has paralleled his spiritual journeys and intense interest in Japanese martial arts. “His athleticism and discipline are huge parts of who he is,” Faith explains. “Art is physical, and his formalized and ongoing Zen training and teaching in the internal art of Aikido has brought harmony into his life and his painting. He likes being centered on the anagogical, something that doesn’t exist and has mystical sublime qualities.” And that explains the abstract visuals, atmospheric use of colors, all independent creations, some requiring 40 layers of paint as the entire work flows. “Faith often tells me when an art piece is done,” he says. “It actually speaks back and communicates closure.”
“The backgrounds have both geometric and random qualities, and he knows that the high chroma – reds and yellows, contrasted with green and blue – has universal appeal,” states admiring artist Charles Anderson. “His work employs exceptional color schemes within the overlapping boundaries of geometric shapes.”
“The current mixed-media creations merge traditional and digital media,” Truman explains. “The aesthetic catalyzes emotional, historical, spiritual and mythical elements, while rendering dimensions of color and geometry with emotive atmospheric connotations. I have synthesized two traditions: Zen in collaboration with the esoteric and sublime, creating an abstract aesthetic of eastern and western expressionism.”
“Recently,” he continues, “I have been developing new approaches to my methodologies thus incorporating 3D and 2D mediums, spontaneous causation and the use of creative technologies to bring satisfying outcomes with transcribing energies.”
So we conclude Act Three with a retired professor emeritus enjoying his home studio, practicing and training others in Aikido and expanding his spiritualism in an abstract, yet somehow organized, chromatic artistic expression.