3 years ago
Breathe in Portland, Maine 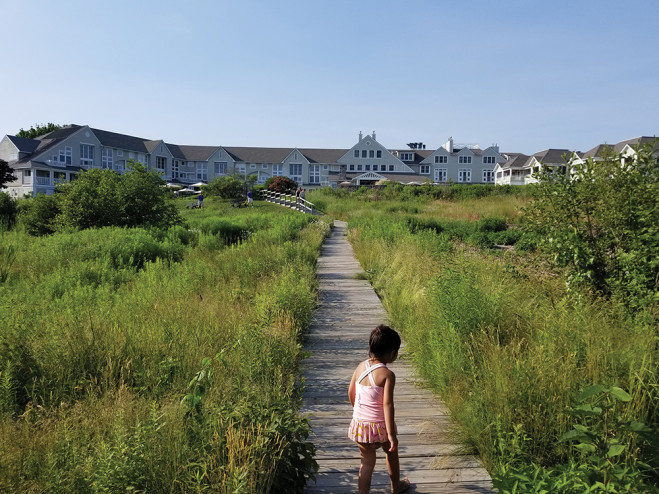 The minute we drove over the bridge into downtown I closed my eyes and breathed in the heavy salt air. There was no mistaking it. That harbor fish smell mixed with the scent of food frying and hoppy beer meant only one thing: we had crossed into Old Port – the heart of Portland, Maine.
Tourists come to Maine for many reasons, but rarely leave without trying the lobster. Before we ventured out to Casco Bay to try our luck trapping one, we hit up The Holy Donut to taste some famous fresh potato donuts with sea salt and dark chocolate. On a sugar high, we followed the directions given by the friendly staff at Inn by the Sea. They arranged for us to join Captain Tom Martin and his crew on the Lucky Catch. Captain Tom, who is recognized all over town and is characterized in a local coloring book, has been lobstering since he was 14. Smiley and optimistic, he runs traps year-round in accordance to the Maine fishery regulations and operates tours in the summers.
We sail out to sea for more than an hour, lifting traps and inspecting the lobster’s belly for eggs. If the lobster is showing her eggs or measures less than 3.25″ or more than 5″, we have to throw it back; the small ones grow, and the large ones add vigor to the gene pool. To further protect the population, Captain Tom demonstrates tagging a female we caught with eggs. He cuts a V-notch on her tail before releasing her in the sea indicating to other fishermen that she’s a fertile breeder. Using special pliers, we band the lobster’s claws and put them in a tank.
We can pay market rate for the lobster we catch but we opt to head back toward the unmistakable Portland Headlight – the oldest lighthouse in Maine built in 1791 – to eat next door at the Lobster Shack at Two Lights. Nothing fancy out front, this award-winning hot spot will take your breath away from the back. Perched above the ocean, overlooking the lighthouse, you can enjoy the signature lobster roll right on a picnic table as the waves crash on nearby rocks. Cozy indoor seating offers a view of fishermen and ships entering the harbor.
As my husband declares his goal to eat lobster in one form or another for every meal, we scan choices online for dinner. Portland was declared Bon Appetit’s 2018 Restaurant City of the Year where even the “beer geeks get giddy” about the variety of tasting rooms. Everything is good, and Street & Co. and 555 do not disappoint.
Not far from Old Port is Cape Elizabeth where we stayed in a charming boutique resort called Inn by the Sea. All 61 newly redesigned suites are outfitted with modern amenities but have the look of old-world, coastal architecture. From a garden suite on the first floor, you can walk out from your porch to the pool. Upper level suites have lofts that overlook the ocean and for inter-generational visits, the two-bedroom suites boast a fireplace, full kitchen and dining area. In winter, Santa visits the Inn for brunch and in summer, the kids roast marshmallows around the firepit.
The Inn prides itself in pairing luxury and natural beauty with eco-friendly initiatives and sustainable design. Rauni Kew, director of public relations, strolls with me on the edge of the stately lawn overlooking the Atlantic Ocean and accented with Adirondack chairs and lawn games. A wooden plank walkway leads to the marsh and ultimately to the sandy, Crescent State Beach where umbrellas and folding chairs await guests. The marsh is a restoration habitat for the New England Cottontail Rabbit that is listed as endangered in both Maine and New Hampshire.
The main restaurant on property, the Sea Glass Inn, is just as conscientious. Lobster is on the menu in many forms, but the executive chef makes a point to serve underutilized seafood and works in a program called OUT OF THE BLUE to identify abundant local fish and help preserve diversity and health of the Gulf of Maine.
The gorgeous establishment has been a destination tradition for families from all over the country – pets included. Bring your own – or adopt a pet. The Inn fosters dogs from the Animal Rescue League of Greater Portland, and more than 115 dogs have been adopted by guests.
Other quintessential Maine activities are a stone’s throw from the Inn. We book an unforgettable sunset sail (BYOB) on a schooner from Portland Schooner Company and watched fireworks from the water along the Eastern Promenade. We visited the L.L. Bean flagship store, headquarters and outlet in the small village of Freeport. To punctuate the true Maine experience, go lighthouse hopping while cruising the coast on Highway 1 all the way to Camden. Just remember, if the coastal folk of Maine know one thing it is how to relax. So it is perfectly authentic if you just opt to sit and watch the ocean, close your eyes and breathe in the air.

Text and Photos by Krisha Chachra

Krisha Chachra served eight years on the Blacksburg Town Council and has written for NRV Magazine for a decade. She is a community advocate & connector and runs an event production organization that hosts Up on the Roof. She writes the travel column for the magazine and occasional human-interest pieces. Krisha has reported and hosted shows for public radio and television and has freelanced for USA Weekend Magazine and The Honolulu Advertiser Email her at kchachra@aol.com