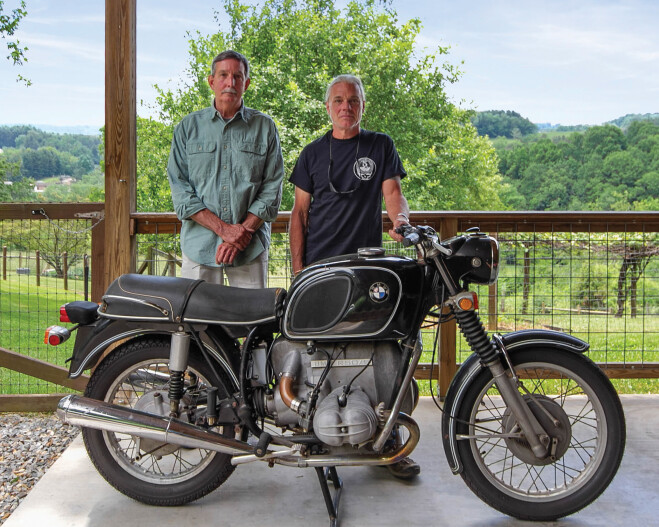 Kerry Underwood and Kenny Vandeveer stood in the detached garage outside of Vandeveer’s Floyd home surrounded by a number of motorcycles, most of them vintage. The object of their attention was Underwood’s 1971 BMW R50/5, for which Vandeveer had just rebuilt the engine, an air-cooled, four-stroke, opposed twin boxer.
“I bought it from my roommate, a BMW enthusiast, 25 years ago,” Underwood relates. “It languished for many years until I persuaded Kenny to work on it.”
“It’s the first old BMW I ever messed with,” states Vandeveer, who has restored old Japanese bikes and uses as his regular ride a modern-day BMW motorcycle. The cylinders on the 1971 had frozen up, and it took Vandeveer several weeks of soaking and tapping to get them free. To complete the rejuvenation project, they had to get a parts bike out of Florida.
This bike has the form-follows-function aesthetic common on motorcycles of the early 1970s. It also has the solidly-engineered air of BMWs of just about any era. But the bike, a reliable tourer with 498 cc, was almost never built.
In the mid-1960s, BMW was seriously considering scrapping its motorcycle program. Sales were down, while sales for their automobiles were picking up, taking up more space in their motor works. Ultimately they decided to press ahead with motorcycles. They hired an engineer from Porsche and tasked him with completely redesigning their lineup of motorbikes. The result was the “Slash 5” series of motorcycles made in the 1970-1973 model years. They also moved motorcycle production out of Bavaria and to Berlin.
Slash 5s kept the flat-twin boxer engine design of their predecessors, but pretty much everything else was new. The crankshaft transitioned from a built device to a forged one-piece part. The chain-driven camshaft was repositioned to below rather than above the crank, providing better ground clearance with the same center of gravity while also assisting with the lubrication of the camshaft. Light-alloy cylinders replaced cast iron cylinders, and the front end now featured telescoping forks.
The front wheel at 19 inches is a hair wider than the rear wheel at 18 inches; tires are 3.25 inches wide in the front and 4 inches wide in the back. Drum brakes were used in both the front and rear. The final drive is by shaft (not chain) providing not only a cleaner ride (there’s no chain to oil) but also a really dynamic ride.
“It’s awesome to ride,” Underwood says. “Its low center of balance, tight steering – it’s just fun to get out and go.”
“You feel everything with the shaft drive,” Vandeveer adds. “And the clutch is so positive.” Consumers of the time agreed, with BMW motorcycle sales in 1971 regaining levels last seen in 1955.
Underwood’s specimen, built in May of 1971, is his 4th full-size motorcycle. The others are a 1988 Harley, a 2003 Harley, and a Kawasaki Sherpa for riding around the farm. He also has his very first motorcycle, a Honda 50 minibike, which Vandeveer fixed up a couple years ago. “When it was done, I put it under the Christmas tree,” Underwood says. “My son was only three years old at the time but once he sat on it he didn’t want to get off!”
Underwood and Vandeveer met some years ago at the old tapas bar above Oddfella’s Cantina in Floyd, back when Underwood owned and operated the now closed restaurant. Today, Underwood is involved in a number of ventures, including Five Mile Mountain Distillery in Floyd. Vandeveer is retired.
In addition to motorcycles, Underwood has also worked on old VW vehicles. There’s a connection between old VWs and BMW motorcycles, Vandeveer points out. Because of the shared-air cooled design of their engines, people would sometimes replace a failed VW engine with a BMW motorcycle engine. “They actually perform better than factory VW engines.”
The engine compartment on the bike is a single complete unit, with the transmission behind the engine, the starter on top, and the distributor and alternator forward, all in one housing. The crash bar extends outward just behind the cylinders.
“They’re like their own self-contained power plant,” Underwood observes. “You can take it out and use it in anything – a car, a plane. I love how everything on it is made to be repaired. You can even replace the contacts in the switches. Maintaining and cleaning them is somewhat cathartic. It’s a zen-like bonding of man and machine.”
The bike, as beautiful as it is, was ultimately designed and made for transportation. Some of the details speak to that purpose. For example, the bike has a parking light to switch on when you have parked to alert oncoming traffic of its stationary presence. Despite its practical reason for being, the bike’s aesthetic charms speak to Underwood’s spirit. “I love the sound of these old BMWs. I like the way it looks. There’s nothing like taking it out on the road, hearing it hum and feeling it move.”