5 years ago
A Trip Down Memory LANE 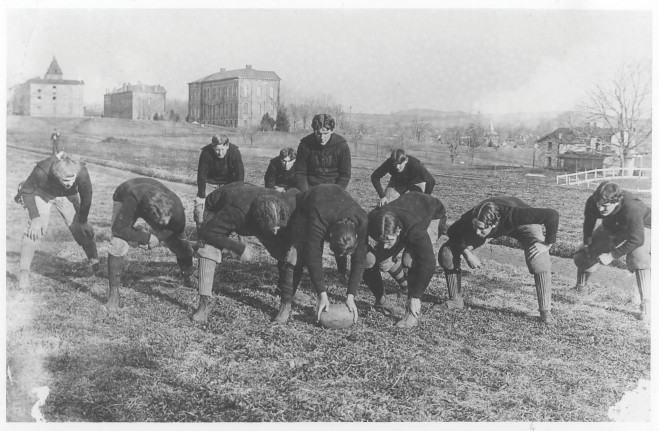 The year was 1892. The place was a stony bean field (or was it wheat?) at Virginia Agricultural and Mechanical College, a swath of land that would become the Drillfield. The people were Techmen, outfitted in the school’s original “prison-like” colors, black and cadet grey. These men were the college’s first football squad, to use the term loosely.
The field was marked off with a plough and: “Ran up and down hill, with interesting little hollows which hid the play from spectators on the other side,” according to The Bugle. Whoever got the ball ran with it, and there was no form of actual team play. No ticket sales, no concessions, nary a row of bleachers. Admission revenue was whatever folks put in a hat passed along the sidelines. 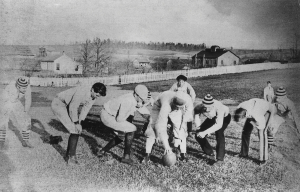 This stony patch of land came to be known as Sheib Field, and on Friday, October 21, 1892, the boys of St. Albans traveled to Blacksburg in three horse-drawn surreys crossing the New River on a ferry, to meet VAMC for their first official game. Season by season the football program prevailed, and in 1896, VAMC became VPI, and school colors changed to Chicago maroon and burnt orange. The new name required a new cheer, and the prize went to O.M. Stull, for his now famous: “Hoki, Hoki, Hoki Hy!” The term “Hokies” was born! 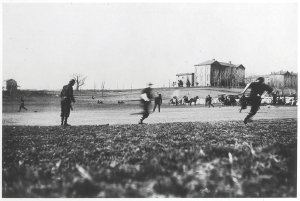 That same year, a small wooden grandstand was erected at Sheib Field, which eventually became Gibboney Field (the field was graded and leveled and the grandstand was enlarged), then Miles Field (the area was sodded and marked), then Miles Stadium. It was here that the groundwork was laid for the future of Hokie football. Located near the present Lee and Pritchard dorms, Miles Stadium was built in sections using class donations. The stadium cost roughly $100,000 to build and seated 3,750 spectators, then 17,000 with temporary bleachers. 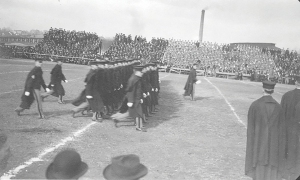 After 40 years at Miles Stadium (66 wins, 25 losses, 4 ties), the stadium was razed, and construction of present-day Lane Stadium commenced. The four-year project kicked off in April of 1964 and cost about $3.5 million. The new stadium seated 35,050 fans and featured a three-tier press box for guests, writers, stats crew members, scouts and coaches.
Lane Stadium remained generally unchanged until 1980, when the east stands grew to 52,500 capacity. Two years later, the stadium installed a lighting system that would help the team get its first nationally broadcast game on WTBS, a 21–14 win over state rival University of Virginia. Lighting was updated again in 2005. 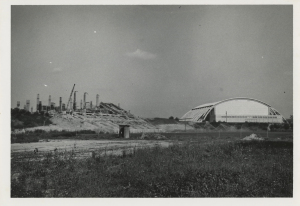 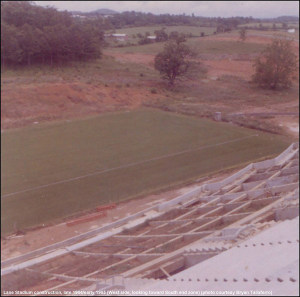 In 1992, the field at Lane Stadium was dedicated as Worsham Field in honor of longtime supporters. Nine years later, Worsham Field received top of the line natural grass turf, drainage, an air vacuum and blower system and a remote monitoring system to control field conditions and maintenance procedures. Able to handle up to 16 inches of rain an hour, the drainage system is quite impressive. In the winter of 2003-04, a heating system was installed to keep the grass at an optimum temperature during winter. This system is in place in just under a handful of stadiums in the world, making Worsham Field a true luxury to play on.
In a two-phase program, approximately 5,500 metal bleacher seats were added to the North end zone from 1999 to 2000. Just in time for the 2002 football season, an 11,000 seat structure to enclose the South end zone was constructed with 15 luxury suites, club seats, media rooms and a visitors’ locker room. 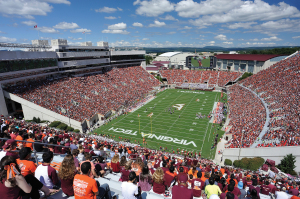 In 2003, the athletic department expressed the need to increase capacity yet again. With the support of fans, the Board of Visitors approved the $52.5 million plan, adding professional stadium lighting, several lounges, 23 luxury suites, new indoor and outdoor club seats, and a new President’s Box. The West Side exterior was landscaped with walkways and a weekday parking lot. Concession stands were added, as well as a ticket office, athletic funds office, an Athletics Hall of Fame and a student academic services area. The project was completed prior to the 2005 season for a capacity of 66,233 fans. (Capacity was later amended to 65,632 for the 2014 season and beyond, following some modifications to the West stands.)
Sitting at 2,057 feet above sea level, Lane Stadium has been rated one of the “Top 10 Scariest Places To Play” (2007) and “The Number One Home Field Advantage in all of College Football” (2005). This is because, decade after decade, one thing hasn’t changed — the steadfast hunger of the Hokie fan. The sea of orange and maroon, the raucous student section, turkey calls and keys jingling at just the right moment…it all comes together in perfect unison to rattle the opposing team and drive the Hokies forward.
From humble beginnings with local teams crossing the river in horse-drawn carriages to an extraordinary present, with dedicated fans flying in from all over the country and the world, Lane Stadium shows that persistence pays off, big time.

Emily Kathleen Alberts has been a Hokie fan since coming to Virginia Tech in the Fall of 1999, which happened to be Virginia Tech’s most successful football season ever!