3 years ago
A Toy Story 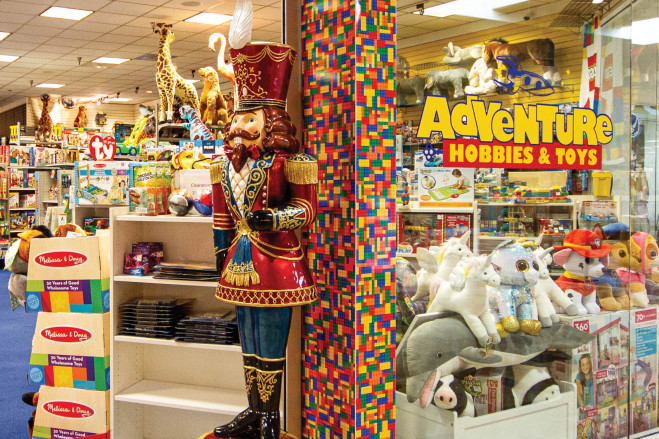 The annual U.S. market for the toy industry is $28 billion, so there’s a lot to know about something that seems as elementary as toys. Research shows that learning through play is an important part of children’s development including:

• Fine and gross motor skills
• Nurturing creativity and
imagination
• Problem solving and learning
cause and effect
• Learning how to play with others
through compromise, conflict
resolution and sharing
• Discovering independence and
positive self-esteem.

Children can benefit from educational toys as early as one month old. Electronics can interfere with this process. “Parents are not giving kids toys but instead phones and tablets,” says Stacy Martin, owner of Adventure Hobbies & Toys in the New River Valley Mall. In fact, he pointed toward toy maker Melissa & Doug’s national push to teach parents who have grown up on screens how to play, so they can teach their kids how to play.
Right now, Martin points out, besides games and puzzles, educational toys and books do not sell well at his store. Still, some independent toy stores such as Imaginations Toy & Furniture in Blacksburg specialize in educational toys. Owner Paula Bolte says there are quality toys that never go out of favor, like balls and wooden train sets such as Brio. Stocking stuffers such as Slinky, pick-up sticks, yo-yos and jacks are classic. Books and stuffed animals are also popular.
“Our philosophy is to get families to spend time together,” says Bolte. She extols the value of toys that allow for creative play. “Kids will make up their own stories,” she adds, if not fed storylines from movies or television shows. But there is a fine balance between pop culture and classic toys.
This year, Martin has seen a big connection between toys and the “Dumbo” movie. A consistent winner at Imaginations is Playmobil®, sets of small people, animals and buildings that promote pretend play. Playmobil comprises about 10% of the store’s sales in any given month. At Adventure Hobbies & Toys, Melissa & Doug (wood, non-licensed toys), LEGO® sets, Barbie dolls, Fisher-Price® products and Hot Wheels are prevalent. Martin says that sensory toys – anything kids can squish, squeeze or manipulate, like Slime, also sell well. Calico Critters and dinosaurs remain popular.
Other best-sellers are kits for science experiments, marble tracks and arts and crafts. Potholder looms, for example, have been around for decades. “Children think they are just making something for Grandma when really they are learning skills they need without realizing it,” Bolte remarks.
Technological innovations generate excitement. Martin feels that the Thames & Kosmos gumball machine maker will be a hit this year. Imaginations stocks the Elenco robotic kit that has children exploring basic coding to make the robot do things. Imaginations also carries infant toys that sell for baby showers through items for adults, as sometimes they enter a second childhood. Bolte is saddened that parents of children ages nine or 10 say the kids are not playing much anymore. The store used to sell toys frequently to kids aged 12 or 13.
Adventures Hobbies & Toys caters to ages zero to 100 with hobby items such as drones, helicopters and radio cars. Both toy shop owners like toys that work for all ages. Jigsaw puzzles bridge the age gap. Bolte says her sales are down from 15 years ago as the retail landscape has drastically changed. “It is getting harder and harder,” she relates when asked about competing with Walmart and Amazon. Martin concurs: “The toy industry is in complete turmoil.”
Indeed, sales in the industry fell two percent last year as toy manufacturers endured their first Christmas without Toys ‘R’ Us in more than 60 years. While a number of retailers, including Target, Walmart and even drug stores, expanded their toy sections this past holiday season, there were still far fewer shelves showcasing toys in 2018 than in years prior.
Martin says that when Toys ‘R’ Us sold its remaining stock in bankruptcy proceedings, discounters like Ollie’s were able to obtain most of the toys and undercut the prices of stores like his. While Martin agrees that toy sales have been down, he sees them trending back in the right direction. In fact, he is opening a satellite store in Valley View Mall, at least for this holiday season.
As for the future, Bolte says that many toy store owners are aging and younger folks do not want the hard work and risk of being small business owners. However, she has hope. Twenty-somethings seem to be more interested in shopping local and touching what they buy than the next older generation. And, she adds: “Companies and stores with quality products and fair pricing will stay in business.”