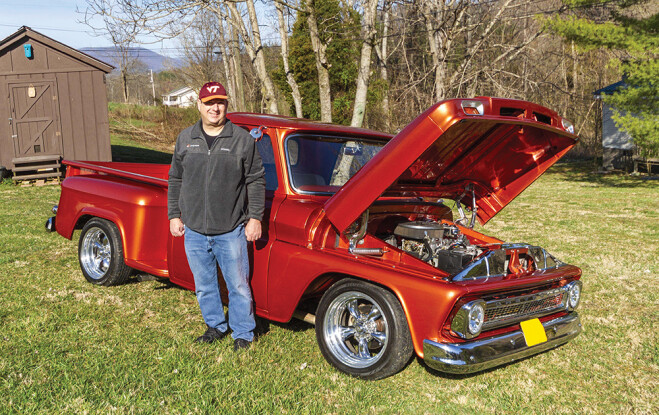 One recent weekend, Donny Dunbar had his restored and modified, sunburst orange, chrome-bedecked 1965 Chevy C10 in his yard, preparing to go to a cruise-in – if the rain held off. “I like the way it rides and drives,” Dunbar states about his prize. “It doesn’t drive like a truck. It drives more like a sports car.”
The truck’s easy driving quality is in part due to modifications which have been made to the shortbed classic, but even if it had been restored to factory specs, it would be a smooth ride. That’s due to the vehicle’s independent suspension – a new feature to the C10 in 1965. That factory design change permitted the truck to handle more like a sedan and permitted the vehicle’s designers to opt for a more low slung body style, a look which has helped the pickup become a classic.
Dunbar’s specimen is a stepside. It sports a narrower bed and fenders situated on the bed’s exterior with a platform in front of the fenders permitting access to the front of the bed. The bed itself has a wooden bottom and, as you can see on its interior walls, exposed rivets indicating where the fenders are attached to the cargo box. (photo on page 42)
The interior of the truck’s cabin is spartan but spacious, easier to enter than preceding years’ models thanks to a wider door swing. The 1965 is also the first year the C10 had standard air-conditioning (underdash). This truck has power windows as well.
Dunbar lives in Pembroke, where he has worked at Celanese for three decades. He grew up in Giles County, where his WW II veteran father, Eugene, and his older brother, Duane, enjoyed working on cars with a younger Donny. Some of the cars the Dunbars worked on were classic cars before they became classics, like Eugene’s 1972 and 1975 Camaros. Donny himself restored a 1971 Camaro and worked on a 1985 Monte Carlo SS and a 1953 GMC pickup.
He bought the C10 a few years ago from a friend and co-worker with whom he had gone to scout the pickup a couple years before. Compared to the other special rides that he’s had, Dunbar jokes that what he likes best about the 1965 Chevy is “that it’s done.”
Dunbar performs regular maintenance on the pickup, up to and including replacing head gaskets. But for the most part, the care is minimal, and most of the work he does is getting it ready for car shows in the warmer months. Every year he drives the pickup around 500 or 700 local miles.
Much of the truck as it exists today is not original. For example, the engine is a small block Chevy (SBC) 400 – bored to performance levels at 30/1,000 of an inch – which was manufactured from 1970 to 1980. The SBC was introduced in 1955 and is today widely acknowledged as one of the classic engines produced by the American automotive industry. Multiple models were made. All of them tended to be durable, and they were also interchangeable across years, in the sense that you could pull parts from one engine and use it on another even when the engines were manufactured decades apart.
The SBC 400 was built as a high-torque, low-performance, weight-hauling type of engine. But like other SBCs, it lends itself to aftermarket modifications, and gearheads over the years have modified the 400 to turn it into a racing engine.
The 400 is equivalent to 6.6L, yet even though its displacement is bigger than earlier versions of the SBC, its external dimensions are roughly the same, permitting it to be swapped in and out of other vehicles. The 400 was able to maintain its external dimensions but has more power by increasing the bore and increasing the crankshaft stroke.
The result is a smooth purring, good sounding engine – not what you would hear from a factory original 1965 C10 engine, but a delight nonetheless. “It definitely sounds good,” Dunbar reflects. “It’s got a good tone.”
And he’s not the only one to believe that – plenty of people have offered to buy the pickup from him. But Dunbar wants to keep it for himself, to enjoy while cruising around the New River Valley – on sunny days.