5 years ago
A Long Way Home 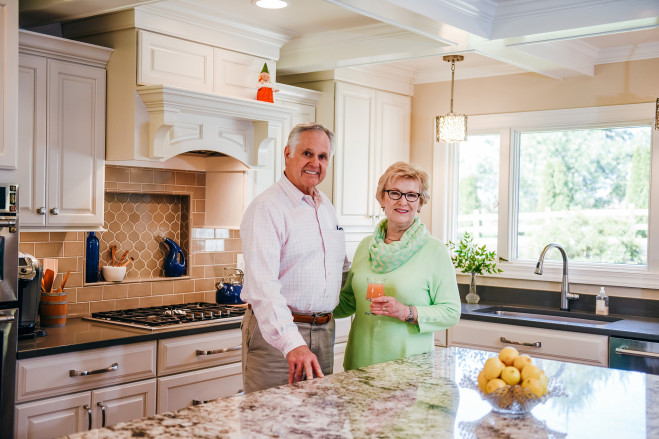 While Allen and Elsa Hancock did not walk or follow any river to the New River Valley, it did take them some five decades to get here for good. Back in 1983, the Pennsylvania couple bought land in the new development of Stroubles Mill in Blacksburg to build a house for his parents. The elder Hancocks lived and raised their family in Richmond, and their daughter, Barbara [Hancock] Crockett, and her husband, Randy, were settled in Blacksburg. Once the Hancocks were retired, they made the drive over and over and over to visit, so Allen and Elsa built them a house so they could be here instead of spending so much time on the road getting here. They moved into their 3-BR, 3 1/2-BA, just under 2,000-square-foot house in 1984.
Fast forward to 2007, and both parents had passed away, so maintenance of the home fell to Allen and Elsa, who had also frequently visited. For the next eight years, they rolled rubber down the road from eastern Pennsylvania to tend to the property and spend time with Barbara and Randy. Elsa had never lived outside the Keystone State, but as their own retirement loomed, they traded in buying new tires for the frequent trips to renovating the home for themselves.
Like many houses built in the 1980s, the floor plan included walls around most rooms, unlike the great room open concepts of today. “We lived in the same ranch for 40 years [in Media, Penn.],” says Elsa. “We’d tossed around updating the kitchen, but decided not to renovate it just to sell, so we sold it and put our renovation budget here.” The meticulously packed boxes that made the 425-mile trip stayed just as they were for eight more months, while the Hancocks camped out at the Crocketts during the renovation.
“Initially, we were thinking of renovating just the kitchen and tackling a few maintenance projects,” Allen explains, “but when Paul Ewing of Ewing Building & Remodeling suggested we open up the floor plan to use more of the space, we agreed.” The couple marvels at their wonderful coffered ceilings which cleverly conceal the steel beam which replaced a supporting wall. The old dining room with its 30-square-foot original window is a charming shared office with file cabinets and supplies neatly tucked behind bifold panel doors. The dining area 90 degrees in the other direction also sits under coffered ceilings with a stunning new hearth and mantel around the fireplace.
The kitchen remains the heart of the home, and is enveloped in a welcome shade of medium warm taupe with crispy white trim. All new stainless steel KitchenAid appliances, a Thermador stovetop, White Starlite granite on the island and desk countertops, gray Quartz on working countertops around the sink and stove top and deep, easily siding drawers that conveniently hold the daily dishes raise the bar on function and beauty. “I never had a gas range,” Elsa states. “The heat comes on fast and goes away just as fast. I’m loving it.”
The color scheme was inspired by a little seashell Elsa picked up more than a decade ago. “I just like it. I’ve always liked the colors in the shell and the feel of it,” she says, passing it to this writer to hold. It’s a sweet, soft, brilliantly designed and colored relic of Mother Nature from which an inviting palette of warmth has been reproduced in the interior.
A sunroom has been added, and since they were expanding in the back, and Allen has a couple prize cars in the garage, they added a good-sized utility space behind and accessible from the garage. “It reduces the risk of scratching my 2003 Nissan 350Z track model car or 2016 BMW M235i convertible pushing or dragging yard tools alongside them,” Allen smiles.
The main floor’s three bedrooms are now two along with two and a half elegantly renovated, state-of-the-art bathrooms with chic granite counters. “There’s another full bath and room for bedroom in the full basement,” Elsa explains. All new hardwood floors, copious recessed lighting, and a perfect laundry room with full size front loading washer and dryer stacked make the home a dream of convenience and style. A basement water issue was resolved and a large, very expensive, retaining wall was built which expanded outdoor living space. “This was a major reconstruction project that was executed brilliantly by the Ewing companies. It is a true joy for us.”
The Hancocks have been enamored with the region all these years. “We love the university environment,” says Allen, who played football at the University of Pennsylvania and feels part Hokie by assimilation. “And we like the Southern way of living and the kind, friendly people.” Welcome to the New River Valley, Allen and Elsa. Welcome home!