3 years ago
A Design-and-Build Adventure 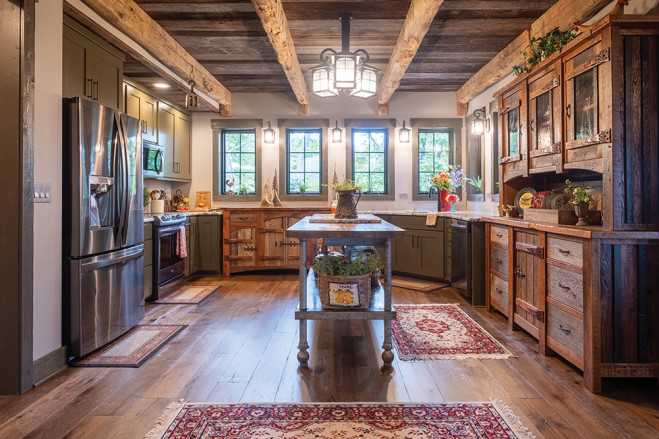 A man in Illinois was tearing down a 150-year-old barn and selling the hand-hewn beams on eBay. Bob and Mary Menees of Pembroke bought the entire load. A winery owner was only too happy to pass along grapevines he was pruning, and Bob and Mary took a huge portion. An old bridge near Richmond had been replaced, and Bob and Mary lugged home the wrought iron sides. An old Turkish church door was found leaning against a barn in King, N.C., and Bob and Mary decided it would make a perfect front door. The old barn wood from Illinois became the interior beams. The grapevines are the foundation for six hand-crafted chandeliers. The bridge sides serve as the railing on the back porch.
And this is but the tip of the iceberg in the design-and-build adventure that Bob and Mary Menees embarked upon to create their unique home overlooking the New River.
“Bob discovered a wooded lot on Google Earth while searching for property along the New River,” Mary relates. “He noticed the 400-foot elevation change from the land to the river, and when we drove out, we couldn’t believe the magnificent view.” The couple, living in the Village at Peppers Ferry at the time, contacted the owners who were not interested in selling. Patience is a virtue the Meneeses seem to have in spades, and after not finding anything better over the next two years, they contacted the owners again. A deal was sealed. The land was theirs. It was February, 2012.
The creative pair works at Signspot in Blacksburg, which is owned by their daughter and son-in-law, Chantry and Justin Hurt. The Meneeses bought some architectural software and began a five-year journey in not only designing the house, but also collecting most of the materials they wanted for the structure. “With the unconventional nature of the construction, we knew the choice of a contractor would be limited,” Bob explains. “We chose Lucas Home Builders for the job. Shannon Lucas was confident from the beginning and saw our vision. They were great to work with, and we couldn’t be happier with how it all turned out.”
It’s hard to pin down if there were more design changes during the process or more trips to flea markets, salvage spots or eBay destinations. Here is another partial list of Bob and Mary’s home building materials. Keyword: Partial – this is not everything.

Exterior
• Poplar bark and wavy pine siding on entire house, Boone,
N.C.
• Windows [inside and out] trimmed with reclaimed cypress
found at a sawmill, Plum Creek, Va.
• Embossed tin barn shingles for soffit, Pennsylvania
• Iron tow chain as rain chain from gutter, West Virginia
• All exterior rock picked up off ground on the property
during construction

“The house had to be planned,” Bob continues, “to fit the limited footprint of the land and be positioned ‘just right’ on the knoll of the cliff to take advantage of the best view. We collected all the reclaimed materials used in the house during the planning stage.”
From breaking ground in November of 2016 to the move-in day in July of 2018, Bob and Mary spent untold hours on-site with the contractor and construction crew. Understanding the uniqueness of this home gave the Lucas Construction team some liberties in keeping with the vision of the owners. “For example, the contractor embedded leaves from the property into the concrete entry for a stamped fossil look to the surface,” Mary says. “They also installed extra poplar bark on the trim work of the back porch and built a bench from one of the barn beams. We were even surprised to find a poplar bark birdhouse that the crew built and mounted to one of the trees at the edge of the cliff!”
Besides being incredibly unique, the home has a natural warmth with a rustic elegance rarely encountered. My stepson, Ken Anderson, an architect in Denver, was along for the tour, and his observations were “earthy” and “grounded”. “It feels like the whole house grew up from the ground on this rocky outcropping,” he stated.
From the front porch concrete through the beautiful kitchen with locally-sourced Amish-made cabinets, dining room, living room with soaring rock fireplace to the four second floor railroad kubbies, Bob and Mary’s adventure in home building produced an amazing, comfortable, earthy abode. “We have four grandchildren between 5 and 11, and we wanted to do something fun and exciting when they come to visit Memaw and Granddad. Four little ‘kubbies’ were built with just enough room for a twin bed and nightstand, and heavy curtains pull closed for privacy, much like sleeping quarters on a train. “They really love this and so do other visiting relatives, like grownups,” Mary smiles. There is a lovely full bathroom upstairs along with an expansive playroom.
But it’s the back deck overlooking the New River, forests, farm land and open fields where Bob and Mary, along with family and friends, spend much of their time. The seasons change. Trains run along the river bank. Birds and wildlife are abundant. And though the house may be built, the adventure of life for Bob and Mary continues among beautiful, unusual materials and interesting treasures discovered on their design-and-build excursions.