5 years ago
A Cool Getaway Close By: Lewisburg, WV 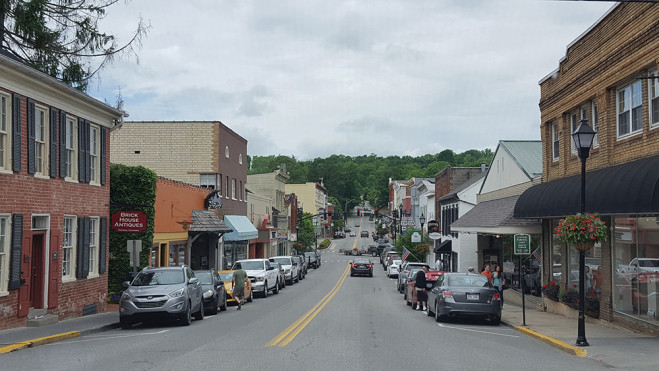 Text and Photos by Krisha Chachra

When thinking about Greenbrier County, W.V., it is hard not to envision The Greenbrier, one of America’s greatest resorts. Tourists from all over the world come to experience southern, Old World hospitality complete with tea service in the afternoon and an evening champagne toast with a waltz in the casino. Owner Jim Justice, who also serves as Governor of West Virginia, added the Greenbrier Classic to the PGA tour and built a tennis arena that hosts legends such as Pete Sampras and John McEnroe.

The Greenbrier has been a mark of elegance with its fine dining, artisan shopping, hot spring pools, secret bunker and the newest addition, a breathtaking timber-framed chapel with stained glass windows – built just in time for Mr. Justice’s daughter’s wedding.
I am partial to the resort simply because my husband and I got married under the iconic Greenbrier Springhouse. But I’ll be the first to admit, although the Greenbrier experience is priceless, staying overnight and enjoying all the amenities the resort offers can get quite pricey.

Less than a two-hour drive from the New River Valley, a day trip to the Greenbrier would be unforgettable. But if you’re willing to explore a little further down the road, about 10 miles away, you will discover an equally treasured place that might appeal to your cool, hip, laid-back side. In fact, Budget Travel voted it “the coolest small town” in America – Lewisburg. Couples and families fascinated by the town’s civil-war connections instantly feel the Old World charm of Lewisburg coupled with a modern energy.

Driving along Washington Street, which bisects historic downtown, visitors experience a vibrancy with full storefronts, each with its own unique character. Live music pipes out of an Irish pub while across the street in a sky-blue building, locals are partaking in fine food, fine wine, espresso and gourmet sandwiches at Stardust Café. A few steps further is Bella Corner Gourmet, a sweet store carrying artisan cheeses and wine along with pitchers made from America’s oldest and finest hand-blown glass company based in West Virginia, Blenko. Aggie’s gift shop carries special occasion gifts while the next store over is a fashion forward clothing and accessory shop named Wolf Creek Gallery.

Right across the street you can stretch your legs on one of the benches while your children play in the water feature in the middle of a quiet green space. Up the street next to the custom-built Farmer’s Market is the distinctive Harmony Ridge Gallery that features top artists, eclectic jewelry, hilarious greeting cards, amazing wood creations and a wine bar used for tastings and events. The owners of Harmony Ridge, Aaron and Monica Maxwell, tell us about the history of the tavern across the street that was preserved and converted into a restaurant called 1785 and then the Livery Tavern. Those two restaurants didn’t make it, so they changed styles to a charming farm to table eatery named Stella’s, which moved in and vacated an historic property on S. Lafayette St. Stella’s closed as well – the tavern site seems to keep its restaurants in the past. However, the number one rated restaurant in Lewisburg, The French Goat, which is at Stella’s old site, is doing very well¬¬¬¬¬¬¬¬¬. Grab a table in the outdoor courtyard near the fountain and order a craft cocktail as well as the Le Burger du

“Goat” with a poached egg – a winner menu item for future visits.
In walking distance from downtown, Lewisburg has one of the four Carnegie Halls in the world for live performances. The town has a movie theatre, a smaller stage and a museum. When you’re done shopping, dining and being entertained, head back to one of the many choices for accommodations in the area – anything from recognizable chains to the Historic General Lewis Inn, a beautifully restored boutique hotel.

And as if all that wasn’t hip enough in a small, West Virginia town, Lewisburg also features special events throughout the year including First Fridays After Five every month except January, a Chocolate Festival in early April, Home and Garden Tour in June and Literary Festival in August. Each autumn, the downtown hosts a food sampling event, Taste of the Town in October, historic ghost tours and a Holiday Open House in November.

Lewisburg is a hot destination any time of the year. But whenever you go, while you’re there, you’re bound to feel much cooler.

Krisha Chachra has served eight years on the Blacksburg Town Council and is now running for Mayor. In the past, she has traveled to over 40 countries on 6 continents and reported and hosted shows for public radio and television. Her columns are taken from her journals and personal insights from traveling. Her book about returning to Blacksburg, Homecoming Journals, may be found online or in local bookstores. kchachra@aol.com