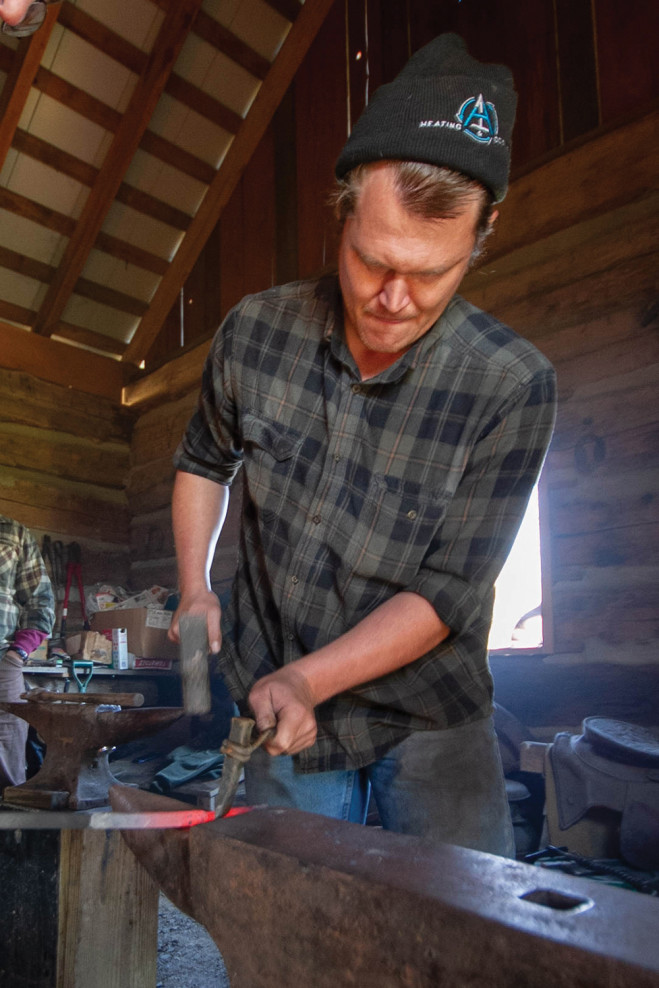 He’s not under a spreading chestnut tree, but Joshua Langfitt IS making a living these days as a blacksmith. He is the lead blacksmith at Smithfield Plantation, which means he has trained apprentices, manages the forge and helps with tours, but that is only a part-time gig. It is at his home forge that he gets to exercise his artistic ability and create the metal things that people ask him to make, whether a blade, blacksmithing tools, signs or a massive set of hinges.
It all started when he was 16, and his dad gave him a graphic novel about a guy who forges a sword in a volcano. He told his dad he thought the whole idea was “malarkey,” but his father urged research before snap judgments, and while Langfitt felt somewhat ultimately vindicated, he found: “…it was entirely possible, but not comfortable and you would probably die, but then, the main character was actually a demi-god, which helped a lot.”
More importantly, it sparked the interest that led to his career path. While there was not today’s panoply of YouTube videos (the DIY university of choice), there were enough books and early internet resources to get him started. Finally, about five years in, www.anvilfire.com came online, and it was a little easier after that. Moreover, the blacksmithing world is very interconnected, with local guilds (he’s president of his) and a national organization, Artist-Blacksmith’s Association of North America, to provide support and connections. It’s a very apprentice-oriented structure with more experienced blacksmiths teaching newer ones.
Langfitt makes lots of hooks and small ornamental objects to take to fairs, as well as tools for guild meetings where they have tailgates to trade and sell to one another, but his main work comes from custom orders. Need a sign for your home? He does it. A set of handmade kitchen knives as a wedding gift? No problem. If you can explain it, he can construct it.
One of his latest projects was a set of strap hinges for a series of arched barn doors that go as high as eight feet and five feet wide. The barn would be featured at the Lewisburg Renaissance Fair. There are three hinges per door, and each is as wide as the door. The middle one looks like a dragon, and the outer ones look like flames. The hardest part is that the pieces were so long and heavy, it was hard to hold them while working on them. Moreover, they transmit a lot of heat, so leather gloves and aprons are absolute necessities.
Langfitt produces a lot of custom blade work, including knives for outside, like machetes, as well as kitchen knives. He uses a particular process called Damascus steel pattern welding, in which several layers of metal are forged together. The final grinding process brings out a lovely pattern of the various metals on the blade, and he finishes the knife with a handmade wooden handle. While he gets some of his materials new, he is able to recycle almost any non-galvanized steel, so trips to scrap yards, metal shops and car lots can turn up a lot of raw material.
Working a forge started as a hobby, but Langfitt says he comes from a family of entrepreneurs, so having his own business seemed the normal order of the day. His wife helps with the books. His skill set is old-fashioned, but his marketing is almost purely 21st century. He has presence on Facebook, Instagram, ETSY and YouTube. Googling JJL Forge gets all of this information as well as other links to articles about him. You can even kick it semi-old school and email him at jjlforge244@gmail.com. Word of mouth and repeat customers also keep him busy.
Blacksmithing is a dangerous undertaking. There are the obvious burns and heat exhaustion, the smoke can create respiratory issues, the noise of pounding the metal can deafen a person, and retinal burns can result from staring too long at the white hot metal you’re shaping. Still, Langfitt’s hands have the smooth, unburned appearance of a person who is skilled and at peace with his work, enjoying it immensely. “There comes a point,” he relates, “where you have to look at it and say, ‘Do I want to be safe or do I want to make something?’ That being said, I did quit my day job because I didn’t want to die before I was 40. If you go to work hating your job and yourself, it’s time to reevaluate.”

So, You Want To Learn Blacksmithing

There are many reasons people are drawn to blacksmithing. Most want to make blades and swords. Others are interested in creating tools. While some come through farrier work, that’s not Langfitt’s cup of tea. Whatever brings people, there are others to help, and it’s not as complicated as one might think. “You just have to have a fire, a desire, something to hold the fire, something to hit with, something to hold the thing you are hitting and you’re in,” he says.
Teaching is part of Langfitt’s blacksmithing career. He has trained apprentices at Historic Smithfield and spends time in individual instruction.
etsy.com/shop/JJLFORGE
facebook.com/JJL-Forge-114936549222127/
instagram.com/jjlforge/
youtube.com/channel/UCAu7IqOZxf3KzCRVYfFrnaA
jjlforge.com