2 years ago
A Christmas Fairyland 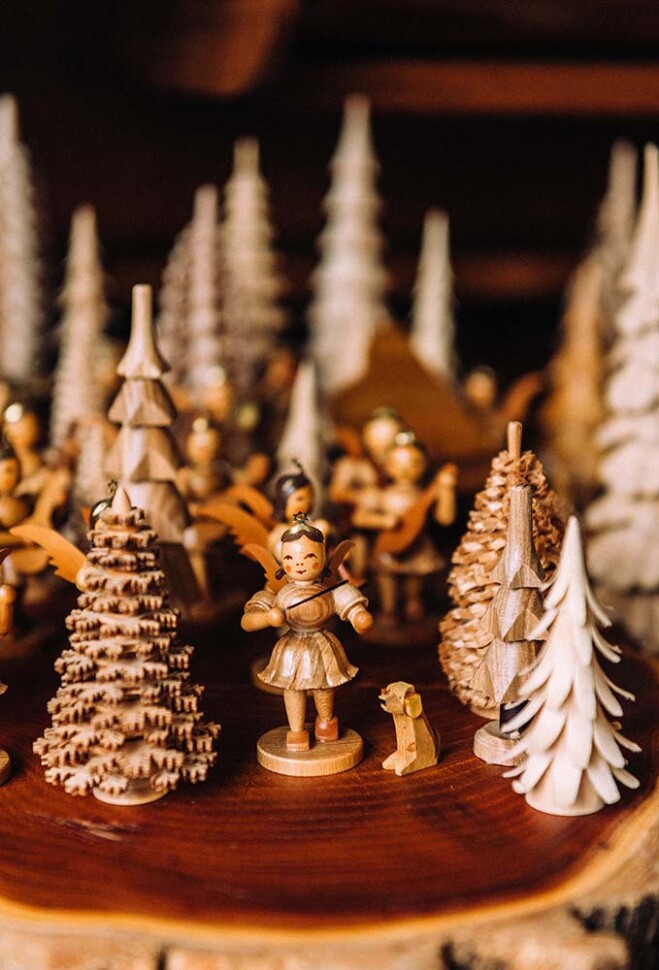 The small mountain town of Seiffen, Germany, captivated Jamie Worley like no place she had ever been. “It was like a fairyland,” she remembers. Now a popular international destination for its enchanting setting, lively musicians and highly skilled craftsmen, no one was there when the Worleys visited in 2000. It was in East Germany, and until the Berlin Wall came down in 1991, many of these hamlets and craftsmen were virtually unknown.
She and her husband, Tim, were stationed in West Berlin and Stuttgart, Germany, for nine of Tim’s 28 years in the U.S. Army. “We’d go through Checkpoint Charlie into East Berlin for shopping. I never knew what I might find and I did not know places like Seiffen existed.” Jamie saw a small article about the little town in the American military newspaper “Stars and Stripes,” and they decided to go there in 2000.
Their story, however, begins back in the Midwest. They met in 1970 at a roommate’s wedding, then held their own wedding two years later in Jamie’s hometown of Romeo, Mich. Tim was working in Indiana as a pharmacist when he decided to go to dental school. He joined the U.S. Army just before graduating. Their first child was born in Berlin, next one in San Antonio, Texas, and a third one in Newport News, Va. “Tim was afraid to move again because we had a child after every move,” Jamie recalls.
Their first Christmas in Blacksburg in 2010 presented the opportunity for Jamie to unpack and set up thousands of Christmas ornaments, and not all from across the ocean. “I discovered Merely Mud (aka Julie Thompson) in Virginia Beach and bought a couple of her pieces. Then, like many of the small German-crafted musicians and nativity scenes, a couple wasn’t quite sufficient.”
Wendt & Kühn workshops have been crafting angel musicians since 1915, and Jamie is awestruck every season as she delicately unwraps and assembles her “eleven dot angels” big band orchestra. The trees along one living room window remind her of time with her father. “We thought he was going to die, so I went and lived with him in a small apartment for four months. As Christmas approached, I bought a few trees at Kroger. We assembled them and put on lights and ornaments. Now I have incorporated them into my holiday decorations with cherished memories of being with my dad.”
The Worleys moved to Blacksburg because of their treasured friendship with John and Christy Buyer. Dr. Buyer owns and operates New River Periodontics and Dental Implant Center with offices in Blacksburg and Roanoke. The couples met in 1983 when the Worleys served as Army sponsors for the Buyers when they moved to Newport News. Sponsors assist newly assigned service members find their way around and get adjusted in a new setting. Dr. Buyer opened his business here in 2009. A year later, due to growth of the practice, he asked Dr. Worley to come and help manage the office. Dr. Worley no longer wanted to practice dentistry, and Dr. Buyer only want to treat patients and not get side-tracked with administrative work. It has worked out well for the pair for a decade.
Jamie jokes that the house they bought was in the reject pile. With five bedrooms, 3 ½ baths, 3,800 square feet and a basement theatre, the house has an incredibly small, closed-in kitchen. “But we love the location, the yard and the first of many knock-your-socks-off sunsets,” she says. And yet it’s barely large enough for the Christmas collections she has amassed across the years. “I do it for me,” Jamie casually comments. “I love unwrapping each one, finding places for everything, enjoying it throughout the Christmas season, then just as lovingly wrapping each one again for their 10 months in storage.”
With abundant, colorful decorations, dishes and linens gracing the main living spaces and all these phenomenal, small, hand-crafted people from the mountain town of Seiffen, the Worley home at Christmas time resembles a fairyland of its own.