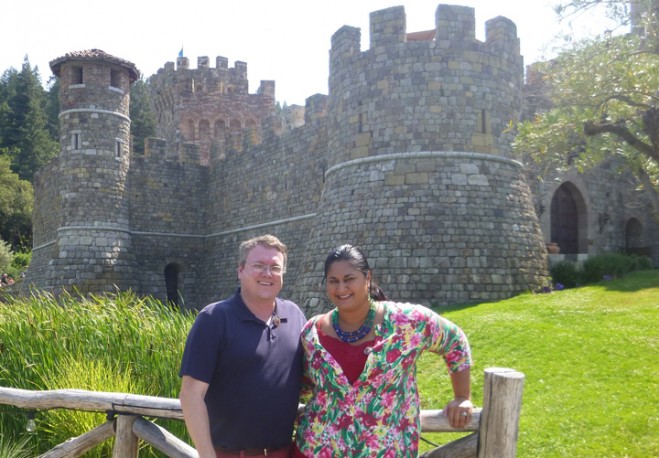 You don’t need a passport or have to worry about clearing customs if Napa is your destination. Traveling through the Valley feels almost like you’ve been transported to another land in another time. It may not be another continent, but it is another country: wine country.

During a week touring San Francisco with my long-time friend, we were introduced to the local hot spots and hangouts, including a weekly food truck eatery experience called “Off the Grid”. Then my husband and I headed over the Golden Gate Bridge and around San Pablo Bay to Highway 29. Instantly, we were out of the silver and steel structures of the city and into a lush land of open fields colored by earthy green and golden tones.

Our first stop was the Napa Valley Wine Train. I initially thought that the train was a hop on – hop off ride, allowing passengers to enjoy tastings along the way. But it is really a slow chug on a route parallel to the main Napa Valley drag of Highway 29, showcasing many of the hundreds of wineries. You can take the train up and back, enjoying a four-course gourmet lunch and tastings in the dining rail car. Or you can book the option to get off at one winery and catch the train on the way back. We decided on a third option and enjoyed the train one-way with a wine tasting and tour of a castle winery at the end.

In our Vista Dome car, built with a 180-degree Napa Valley view under antique dome windows, we had a lovely lunch paired with Domaine Chandon sparkling wine. We passed big, corporate wineries with spectacular entrances like Opus One and the ubiquitous Robert Mondavi. We saw celebrity-owned vineyards with ostentatious gated entrances like Inglenook, owned by the Coppala family, which used its own memorabilia to decorate inside. Our server and very knowledgeable oenophile, Kelly, is the great-granddaughter of the founder of the Nichelini family winery. She told us that Napa is 30 miles long and only five miles wide. She pointed out boutique wineries that require advance reservations for wine tastings, such as Nickle & Nickle, Cakebread and one that ended up being a favorite, Beaulieu Vineyard. We noticed that each row in the vineyards had a rose bush planted at the front. This is how the farmers know if the vines are infested with bugs, she explained. The pests will attack the rose bushes first.

At the end of the line, we disembarked and took a shuttle to the extraordinary Castello di Amorosa, a true replica of a 13th century Tuscan castle built by entrepreneur and perfectionist Dario Sattui. Sattui has another winery down the road, but the castle was his magnum opus, his passion – or maybe obsession. It took 15 years to research and 12 years to build. The result is a 121,000-square-foot fortress with towers, 107 rooms authentically decorated in medieval style, miles of caverns and tunnels for wine barrel storage and a real moat encircling the property. The wine is from grapes grown on the property, is only sold onsite and cannot be bought anywhere else. We grabbed a few bottles and made our way through the eerie, endless, wine barrel caverns, relieved we had a guide through the maze of dimly lit tunnels. We learned, predictably, that the castle hosts the most famous and scary Halloween party in the valley every year.

Due to local ordinances, most wineries are not allowed to serve food onsite. Therefore, Napa hosts some of the most highly acclaimed and celebrated restaurants from the most prestigious Michelin Star chefs in the world. Within a few blocks in nearby Yountville, one can dine at Thomas Keller’s Bouchon, Ad Hoc or one of the most famous eateries in the world, the French Laundry. The latter has a two-month reservation list and boasts its own vegetable and herb gardens across the street. If you can’t get into any of Keller’s restaurants, Chef Michael Chiarello’s Bottega Ristorante a few streets down and other artisan farm-to-table establishments such as Bistro Jeanty or Mustards Grill will make you feel like you’re in culinary heaven. Domaine Chandon, the winery known for sparkling wine, however, does house a beautiful restaurant worth trying called Étoile – you will not be disappointed with the artful presentation and quality of ingredients. And, of course, each decadent meal can be paired with the perfect, local California wine.

It was almost time to call it a day and head back to the Meritage Resort and Spa, a beautiful choice in Napa with its own winery and a pool that is set down below vineyards where every grape variety including Pinots, Malbec and Cabernet grows. But before we headed back, we took the Silverado Trail and stopped at a few more wineries off the beaten path. Raymond, the posh Quintessa, and Baldacci wineries are all good stops, but our favorite end-day view was at Silverado Vineyards. Owned by the daughter of Walt Disney and her husband, the winery hangs over the miles of vineyards and living grapes below. We propped our feet on the terrace walls and sipped their latest vintage as the sun sunk slowly into the valley.

Krisha Chachra is a Blacksburg Town Council member, regular columnist and author who has traveled to 40 countries on 6 continents and reported and hosted shows for public radio and television. Her columns are taken from her journals and personal insights from traveling nationally and internationally throughout her life. Her book about returning to Blacksburg, “Homecoming Journals,” may be found online or in local bookstores. E-mail her at kchachra@aol.com.