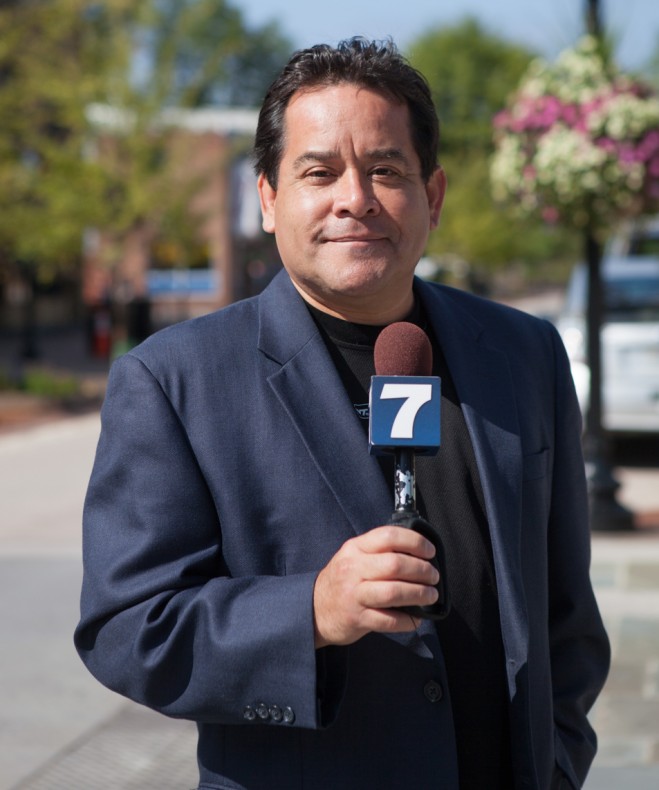 If you have tuned in to “your hometown station” WDBJ-7 news coverage in the New River Valley for the past year, then certainly, you have caught
his concise reporting style and heard the rolling R when he says his name: Orlando Salinas.

Orlando Salinas’ education path and career adventure have no straight lines. Poor math skills in third grade prompted a teacher to tell him: “You are a stupid, little boy.” It stuck with him a long time. Maybe that partially explains his having gone through 33 jobs between age 15 and 8 months, when he could get a work permit, and age 30. But it was also his mouth, he’ll admit. He loves to talk, and talking got him into trouble often.
“I had lots of good menial jobs,” he says, and when you ask what’s “good” about a menial job, he responds emphatically. “Just having a job is good! It doesn’t matter what the work is!”

One of six kids, Salinas had the role model of his parents, along with their constant encouragement, to look to for inspiration. “They came to the U.S. from Bolivia in the 1950s,” he relates. “My dad spoke no English and worked as a janitor while he studied the language.” When the family moved to Blacksburg in the mid-1970s, his father was a general practitioner with M.D. after his name.

Salinas graduated from Blacksburg High School in 1979 and took a few classes at New River Community College during those many job-jumping years. He met his wife at a nursing home in the New River Valley. “I was doing some volunteer work there, pushing a man in a wheelchair to the dining room. I saw this girl off to my right in a white nurse uniform, and I thought she was beautiful!” He couldn’t take his eyes off her, and he ran the wheelchair into a wall, causing the elderly resident to fall out. He married her seven years later.

Salinas chose Virginia Commonwealth University to complete his bachelor’s degree in broadcasting for one simple reason: “VCU was the only college which required just one math class – a very, very, very low level math class.” Before he graduated, he landed his first television job in Richmond with the help of a phone book.

“I didn’t have a demo tape, so I read a ‘fake script’ for the station manager. When I finished, the anchor said the bright, studio lights were causing me to squint and that I needed to sit a little higher,” he relates.

Salinas has a striking presence at five-foot-four, but he knew the chair was at its highest setting because he had put it there already. On a whim while walking back for a second reading, he picked up the huge yellow pages phone book from the secretary’s desk, placed it on the chair and sat on it. He got the job.

Of his many traveling assignments, he may have been the most apprehensive in Colombia. He flew to a cocaine production site with a couple dozen weedeaters. “We couldn’t figure out why all these weedeaters were on this little puddle jumper plane, but we found out soon enough. They’re used to whack coco leaves, which go into 50-gallon vats in a mushy mix.”
The reporting team was surrounded by jungle and heavily armed guerillas. Salinas remembers having a fleeting thought like “…so this is how it all ends,” realizing he had no bearings on his location, lots of big guns with serious ammo a few feet away and dense jungle all around.

The work may sound glamorous and exhilarating, and Salinas does love the hot spots and reporting on the edge. But it comes with a price. “It was a great ride, but it cost me a lot of family time when my kids were growing up,” he concedes. “Miami is a fantastic place, but very plastic.”

His mother’s failing health prompted his return to the New River Valley. “If I could do it all over again, I might have come back sooner,” he says quietly. About a year ago, he accepted the job as New River Valley bureau chief for the CBS affiliate, WDBJ-7 in Roanoke.

“I love it here. I love being part of a working newsroom in an atmosphere that encourages debate. Everyone is not on the same page, and management wants the discussions.” His enthusiasm shows in the sincerity of his tone of voice, hand gestures for emphasis and integrity in his dark brown eyes.
Orlando Salinas, 51, is one genuine, honorable, straight-talking, bilingual hombre. None of the flair of being a television broadcaster on the national or regional stage has gone to his head. He is overtly and overly generous with praise to everyone who has given him a job and encouraged him along the way. His humility is evident when he says that “25 percent of what I do is skill and 75 percent is from the good graces of others.”

He also modifies Ben Franklin’s beer adage: “That I do this for a living is proof that there is a God, and doing it for 23 years proves He has a sense of humor.” Salinas is all about having a sense of humor coupled with a serious perseverance. His degree from VCU is accompanied by one from CHK – the College of Hard Knocks. He’s earned his way every step, and he credits everyone else for his success.