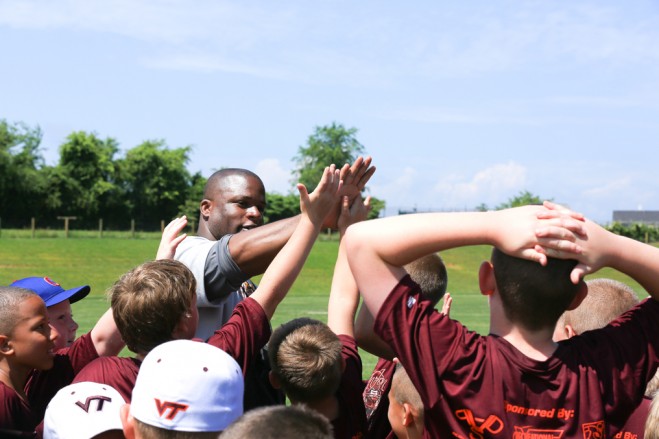 It’s really a Challenge with a capital C for a Virginia Tech football player when the National Football League comes courting prior to graduation.

In 2001, Kevin Jones of Chester, Penn., was the number one recruit in the nation, choosing Virginia Tech over other good schools. A scant three years later, he departed Blacksburg and was selected in the first round of the 2004 NFL Draft. A star running back, Jones played four years with the Detroit Lions followed by two more years with the Chicago Bears.

“I promised myself I’d finish my college education,” states the 6-foot, 225-pound Virginia Tech student (once again), husband, dad, friend and mentor. “It worked out well for us to return to Blacksburg a couple years ago, and here we are.” The “we” includes his wife, Robyn, and three young children.
“Besides finishing his degree, Kevin wanted to get back into this community and stay connected to football,” Robyn adds. “Thus, the football camp idea. There wasn’t one here, and we did a trial run of the concept in June of 2011. We figured it would be cool if we got 50 kids.”

It must have been really cool, because this past June, more than 100 campers participated, as well as lots of coaches, some NFL and Hall of Fame players and, of course, current Hokie football players. “We try to keep the kid-coach ratio at 10-1 or 10-2, so each kid has good one-on-one experiences,” she explains

The Kevin Jones Youth Football Training Camp is not about making money. It covers its costs and scholarships, keeps a little to begin with next year and donates a portion to the Boys & Girls Clubs of Southwest Virginia. “There are many kids out there who don’t have someone to come home to, and this organization fills a void in lots of childrens’ lives,” says Jones. His father-in-law was closely connected to the agency, and he embraces their efforts and mission.

This football star’s return to the campus is a testimony to his value on education, and he promotes that among campers. “Life is all about doing well off the field, as well as on it. We may not be able to reach a million kids, but each summer we can touch hearts and lives in ways that can positively impact youth for a lifetime.”

As with any athletic endeavor, the camp is not simply or exclusively about the sport. It encompasses elements of teamwork, discipline, responsibility and the importance of education, role models and time management. “One of the most valuable things you can instill in a kid is that whatever you are working toward – starting a business, working at a job, striving to get a position in sports, anything – that you do the best you can without comparing yourself to the person standing next to you or any others,” Jones says.

And, naturally, the life lessons are woven into lots of football fun. Campers are divided by age and position, and they revel in practice drills and learning the finer points of each player position. They are taught about the importance of training and given tools to compete successfully on the field.
Understanding that the camp price might be unreachable for some, Kevin and Robyn offer 10 scholarships. Potential campers must write and submit a 250-word essay on why education is important and how it prepares you for life on and off the football field. The camp is run in collaboration with Virginia Tech Recreational Sports.