8 years ago
Back to the Future…In a DeLorean 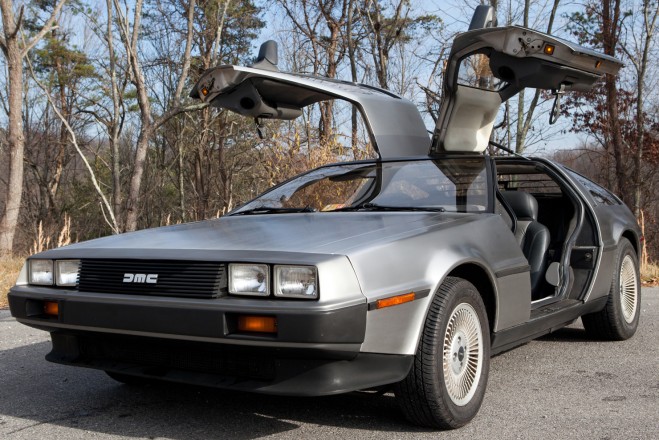 For the last two-plus years, Kevin Cupp has been turning heads in the New River Valley in his 1981 DeLorean DMC-12. “People turn and stare,” he says. “At the grocery store, folks will come up and talk and take pictures.” And they make Back to the Future jokes, like “Where’s the flux capacitor?”

The DMC-12 was featured in the classic 1985 movie Back to the Future and its sequels. The car is the platform the zany inventor, Doc Brown (Christopher Lloyd), uses to facilitate time travel, with the help of a plutonium-powered flux capacitor. He travels through time with the movie’s teenage skateboarding protagonist, Marty McFly (Michael J. Fox).

News flash: There is no flux capacitor in Cupp’s car, though he hopes someday to obtain a replica. They are readily available. He does have a personalized license plate, though, which says, “Fluxing”.

Cupp graduated from Virginia Tech in 2009 with a bachelor’s degree in business information technology and acquired the car the next year, two months after attending that year’s biennial DeLorean Car Show and Convention in Kentucky with his fiancée, Taylor White. “I am very thankful to have someone who tolerates this hobby,” states Cupp. “Some DeLorean owners have to make a choice – the woman or the hobby.” Cupp found the car on an online DeLorean message board, and it was then in North Carolina.  It had 89,000 when Cupp acquired it; that’s up to 93,000 now. His is car number 3472 – all DMC collectors know each other by the Vehicle Identification Numbers of their cars.

The car is named after John DeLorean, who was involved in creating Pontiac’s GTO, Firebird and Grand Prix models while working at General Motors. He had a vision to create a car that wasn’t being made by the large auto manufacturers. His dream, according to Cupp, was “an ethical sports car – one that looked great, got good fuel mileage, had great performance and nice styling and was long-lasting. He was tired of just bending fenders.”

DeLorean left GM in 1973 to start his own DeLorean Motor Company (DMC), receiving investments from Johnny Carson and Sammy Davis, Jr. When North Ireland offered incentives, DMC built its factory just outside of Belfast. The company was to begin production of a two-seater sportscar in the late 1970s. But numerous setbacks – including the abandonment of a new type of manufacturing technology meant to make a lightweight chassis – caused the rollout of his car to be pushed back.

Production finally began in January of 1981. By 1982, DMC was bankrupt. John DeLorean had been charged of drug trafficking in October of that year, for which he was later found not guilty. In all, some 9000 DeLoreans were produced, and about 6500 remain, worldwide.

Cupp’s DeLorean was built in August, 1981. Like other DeLoreans, it has the car’s signature stainless steel body panels, gull-wing doors and rear-mount PRV (Peugeot-Renault-Volvo) fuel-injected V6 engine. The original motor in Cupp’s car had block rot, and it was replaced by a previous owner with a crate engine. It has since been modified with performance cams, a performance ignition coil and new injectors.

Recently, Cupp had the engine powder coated and redid the cylinder seals. He sent it to a shop in Illinois which specializes in DMCs, having them also put in a new radiator and door locks. The rear lift which covers the engine is louvered, a design feature that led to a recall of the cars while they were in production. In winter, snow would melt past the louvers, and the resulting moisture would collect on the throttle, eventually freezing and sticking it. The recall involved installing a metal shield over the throttle to prevent sticking.

The distinctive gull-wing doors are an advantage on rainy days, Cupp explains, as they keep you dry when you get in and out of the vehicle. The only disadvantage he sees to the doors is the fact that you need a free hand to close them. “If your hands are full, you have to put something down to close it.”

Cupp is a software engineer for EllisLab, working most days at a desk, so he is glad that the DeLorean gives him an opportunity to work with his hands. “It provides a good balance.” He also likes taking his DeLorean out for a spin – whether through tailgates before a Virginia Tech football game, where “it gets some good reactions” or for a run on the Blue Ridge Parkway. “You kind of hug the road,” he relates, with its low ground clearance. “People say it’s like riding a Go Kart.” His daily ride is a Ford Fiesta, though Cupp prefers the DeLorean.

There’s a list of improvements Cupp would like to make to the car  – install a new windshield, fix a gear oil leak, solve a coolant fan amperage issue, have the wheels refinished, fix a dent in left rear fender, refinish the front and back fascia, install a new headliner. For now, though, he’s happy with it just the way it is – the car he’s wanted since he saw Back to the Future for the first time when he was five years old.

“They picked this car for the movie because it looks cool. It doesn’t seem to age. It’s timeless,” he declares. So where would Cupp go if his DMC could travel back and forth in time? What if Doc Brown said to him, “Input your destination time on the keypad.”

“It would be cool to go back to when they were building the cars,” Cupp says. Turn on the time circuits!