8 years ago
A Memorable Wedding with beer favors, wind and Hokie Bird 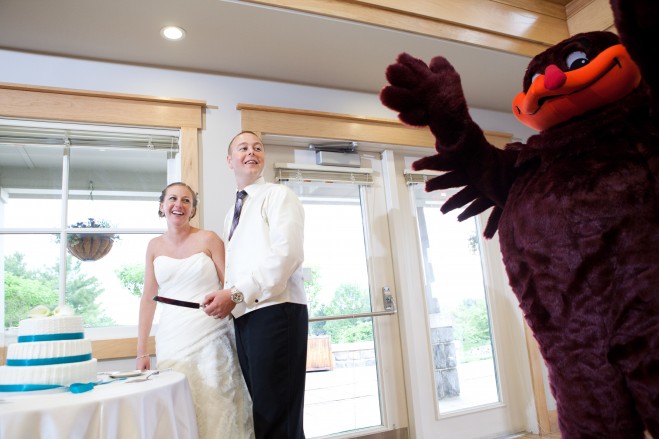 On their wedding day, all couples are prepared to make it through the sunny days and the stormy days in their future. That is a nice sentiment in theory, but what if both of those natural elements come into play on the day of your outdoor wedding?

Bride and groom, Katie and Matt Eller, were up for the challenge, and their love brought all the guests and catering staff together to recoup from the small ‘mini-hurricane’ mishap at their reception. Their wedding day turned out as beautiful and romantic as anyone could have planned.

Katie and Matt are college sweethearts who met on the sand volleyball courts behind their dorms at Virginia Tech. Katie is a Blacksburg native, and Matt is from Virginia Beach. Their love grew through their undergrad years, and they continued their relationship another two years by long distance after graduation. The couple was finally able to relocate to the same city, Richmond.

In April of 2011, the lovebirds decided to participate in a charity golf tournament in the New River Valley, organized in part by Katie’s dad. While here, the two decided to visit their old campus and one of their favorite spots. “It didn’t surprise me that we wandered over to the Hahn Horticulture garden to look around, that was a place we often frequented when at school. We stopped on the deck by the pond and waterfall. Matt started saying something, but I got distracted by a turtle in the water. I accidentally interrupted the beginning of his proposal by yelling ‘look at the turtle!’ We laughed, and he picked up where he left off, got down on one knee and popped the question!” says Katie.

The couple had fun with wedding planning and settled on the obvious decision for location: Hahn Horticulture Garden. With their date booked for June 1, 2012, Katie and Matt got down to organizing, planning and creating almost all of the elements of the invitations and reception. Katie admits that making their own invitations was time-consuming.

“We decided to do them ourselves, and though they came out great, they took a lot longer than anticipated! We bought nice stationery , printed everything on our laser jet, made envelope liners and put an embossed motif on each one. They definitely had a personal touch,” she relates.

“After a lot of time on the computer looking at dresses, I fell in love with an Alita Graham Dress on the Klienfelds website,” Katie says. She took the bus with her mom and sister to the store in New York City and tried on the same gown. I loved it, but to be sure, I tried on others, then bought that sample gown and brought it back on the bus seat next to me!”

The fun part for Matt was making beer. “Matt is a home brewer,” Katie explains, “so one of our favors was a bottle of home-brewed beer. We brewed three different kinds with custom labels and names. The signature beer was ‘Juno Uno’ for June 1st.”

Other plans and preparations came together nicely. Food for the cocktail hour and dinner buffet were provided by Professional Catering of Blacksburg. Flowers came from Best Wishes in Blacksburg and featured white calla lilies in the centerpieces, bouquets, boutonnieres and the cake topper.

“Matt’s Grandma has made many wedding cakes, and we wanted her to make ours. It was challenging because she lives in Virginia Beach. She transported three tiers separately, then assembled and iced them the day before the wedding at a local hotel. It was a secret family recipe spiced pound cake with butter cream icing.”

With clouds rolling in on their big day, the ceremony in front of 90 close friends and family members finished just in time. Very quickly the wind picked up and big storm clouds rolled in. “Guests were able to make it inside, and the brave ones helped hold down the sides of the large dinner tent because it almost blew away! The storm lasted about 10 minutes, and the sun came back out. What was so special is that everyone came together to get everything dried off and put back together.”

A surprise guest popped into the reception. “We arranged a visit from the Hokie Bird, which was a surprise to most guests. After dinner, the DJ abruptly played Enter Sandman and the Hokie Bird came dancing into the dinner tent. He led people inside to cut the cake and hung around for a little while to take pictures,” says Katie.

Their dream wedding is now a rich memory, and couple is starting their life together with a new family member, Juno, the shih tzu. Juno joined the Eller clan the day after their wedding at a family barbeque as a special gift from her parents.

Sophie Karatiskis is a senior at Virginia Tech and an intern and assistant editor at New River Valley Magazine.